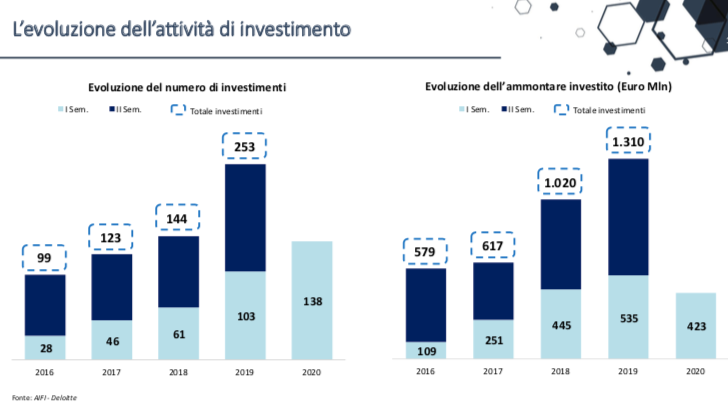 In 1H20, the fundraising of private debt funds in Italy increased together with transactions and reimbursements, Aifi and Deloitte said during the Private Debt Awards (see here a previous post by BeBeez). In 1H20, private debt funds raised 195 million euros (10% yoy – 178 million in 1H19), the 118 reimbursements of the period are worth 191 million.The funds closed 138 transactions (+34%) with 22 companies (+22%). However, investments dropped by 21% for a total of 423 million.  In reality, the Italian private debt market is larger if we also consider more structured debt transactions and investments by operators other than private debt funds only. The BeBeez Private Debt Report on the first eight months of 2020 calculated deals for over 8.4 billion euros (available for subscribers to BeBeez News Premium and BeBeez Private Data, find out here how to subscribe), considering direct lending, purchases of corporate credits and securitisations of loans to SMEs but net of direct lending that passes through the fintech platforms. Having said that, it is true that Italian private debt funds are still very few compared to the potential of the market.

PSC Partecipazioni, an Italian provider of tech infrastructures, borrowed a 75 million euros facility with a tenure of 6 years for which Sace provided a warranty (see here a previous post by BeBeez). Unicredit, Banco BPM, Cassa depositi e prestiti, and Mps Capital Services provided these resources that PSC will invest in its working capital and organic development. PSC Partecipazioni belongs to the Pesce Family, to Simest (9.6%) and to Fincantieri (10%). PSC Partecipazioni reportedly tabled a non-binding bid for troubled TMT company Italtel that is in receivership. PSC is holding talks with the company’s creditors and the shareholders of Exprivia (which owns 81% of Italtel) and Cisco (19% owner of Italtel). PSC has to provide Milan Court with a turnaround plan by 7 November.

Clean energy and industrial group Undo received a 15 million euros financing facility from Mps Capital Services (see here a previous post by BeBeez). The financing has a 2-years tenure and has the features of the instruments for acquisition and project financing. Undo will invest such proceeds in its organic development. The company has revenues of 13.5 million and in 2019 it issued two minibonds for a total amount of 4 million. Zenit, Iccrea BancaImpresa and Banca Popolare del Lazio subscribed these bonds that will allow Undo to finance acquisitions.

Digitalplatforms acquired Omicron Industriale from the Borghini Family (see here a previous post by BeBeez). DigitalPlatforms financed the transaction with the support of private debt fund RiverRock Italian Hybrid Capital Fund, who financed the company’s previous buy of Gibiesse di Guerini & C. Omicron has sales of 5.4 million euros, an ebitda of 0.461 million and a net financial debt of 1.2 million. Sign up here for BeBeez Newsletter about Private Debt and receive all the last 24 hours updates for the sector.

Iccrea BancaImpresa, BCC di Roma, Emil Banca, and Credito Cooperativo Ravennate Forlivese e Imolese (all part of Gruppo Bancario Cooperativo Iccrea) provided a financing facility of 37.8 million euros with the support of Cassa Depositi e Prestiti for the production chain of potatoes and its semi-finished products (See here a previous post by BeBeez). The Italian Ministry for agricoltural policies will provide a further 11.8 million through Fondo Sviluppo e Coesione. CO.VAL.PA. Abruzzo, Patfrut, Associazione Marsicana Produttori di Patate, Azienda Agricola Ciafardoni Luigi, and Agrifood Abruzzo received part of such resources that will invest in their organic growth. The producers of potatoes semifinished products based in Abruzzo, Emilia-Romagna, Lombardy, and Apulia are eligible for receiving this kind of support

Baglioni, an Italian producer of industrial machinery, issued a minibond worth 5 million euros that Anthilia BIT III ( 3.3 million) and Anthilia BIT IV Co-Investment Fund (1.7 million) subscribed (see here a previous post by BeBeez). The bond will mature on 31 December 2025, with a 5.7% yield and an amortizing reimbursement with a 15 months pre-amortising. Fondo Centrale di Garanzia will provide a warranty for up to 50% of the issuance. Baglioni has sales of 116 million euros with an ebitda of 6.64 million. In January 2015, Idea Efficienza Energetica e Sviluppo Sostenibile acquired 41.2% of the company after having invested 10 million in a capital increase. Franco Tartaglino (ceo) and Maura Baglioni (chairwoman) head the business. Idea sold its stake at the and of 2019. Baglioni will invest such proceeds in its internal reorganization. Sign up here for BeBeez Newsletter about Private Debt and receive all the last 24 hours updates for the sector.

DBRS Ratings downgraded to BBB from BB the Class A notes of the NPL securitization vehicle Belvedere (see here a previous post by BeBeez). Earlier in July, Moody’s announced a downgrade from Baa2 to Ba1. In January 2019, Bayview Global Opportunities Fund S.C.S. SICAV-RAIF’s Belvedere carried on the securitization of eight portfolios of Italian Npls that acquired on the secondary market and that Intesa SanPaolo and cooperative banks  originated for 2 billion euros (Beyond the Clouds portfolio) and for 540 million. Belvedere issued three classes of notes: Class A Senior for 320 million (those that Moody’s and DBRS downgraded and received a BBB rating from Scope), Class B for 95 million, and junior without any rating. Mediobanca and other institutional investors purchased the senior notes. Belvedere acquired the portfolios from five spvs: Gemini spv, Sirius spv, Antares spv, SPV Project 1702, and Adige spv.

Banca Ifis is studiying a partnership with IBL Banca (see here a previous post by BeBeez). Retail debtors may pay back their distressed debts by borrowing resources from IBL that may issue one-fifth assignment loans. Banca Ifis could reduce the recovery time for its non performing loans.