Home Companies It’s official, Sia is to be merged in Nexi. Here are all details of the major paytech deal in Italy
Private EquityOctober 05, 2020Posted By: bebeez
Print Email

It’s official, Sia is to be merged in Nexi. Here are all details of the major paytech deal in Italy 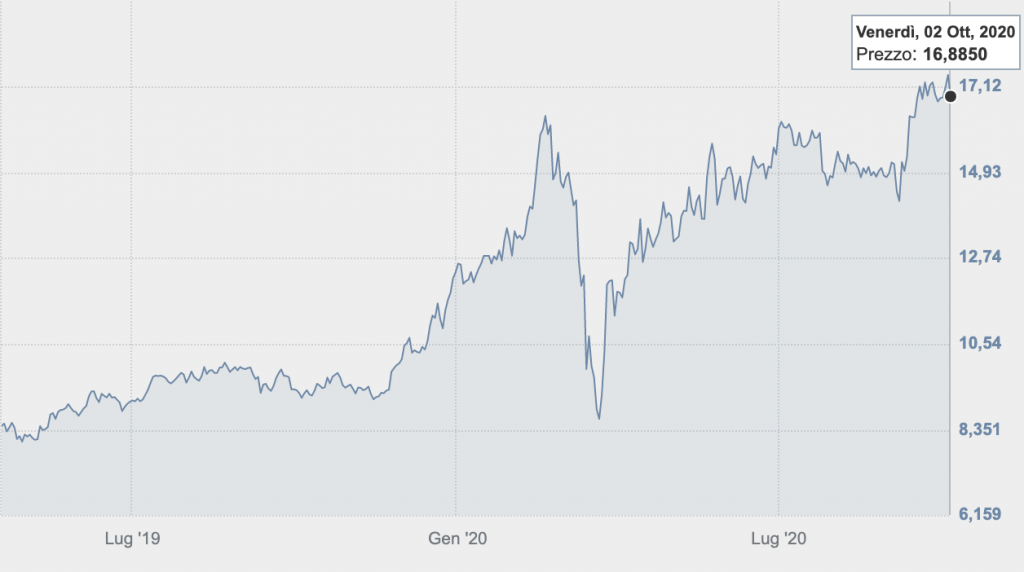 The announcement of the agreement for the merger between the Milan-listed Nexi, specialized in card and mobile payment services, and Sia, the leading group in payment services and infrastructures, controlled by Cdp Equity, arrived very early this morning. (see the press release here). The agreement had been imminent for a few weeks (see here a previous article by BeBeez). The conference call has been scheduled for this morning at 8.30.

The operation provides for the integration of the two groups to be carried out through the merger by incorporation of Sia into Nexi. The company resulting from the merger will remain listed on the MTA with a free float of 40%. The newly signed Memorandum of Understanding provides that, in the event of completion of the merger by incorporation of Sia into Nexi, Sia shareholders will receive 1.5761 Nexi shares for each SIA share, equal to a share of approximately 30% of the capital of the new group, while the current Nexi shareholders will retain approximately 70%. Consequently, Cdp, indirectly through Cdp Equity and FSIA, will have an overall stake of the capital of the new group of just over 25% and the private equity funds (Advent International, Bain Capital and Clessidra) shareholders of Nexi through Mercury UK HoldCo, will have about 23%. At current market values, the new group will have a total capitalization of more than 15 billion euros. As for governance, Nexi ceo Paolo Bertoluzzo will remain at the helm of the new group.
(article to be finalized)

While Intesa Sanpaolo, after the takeover bid on UBI Banca, today has almost 12% of the capital of Nexi. We recall, in fact, that at the end of June the closing of the transaction was signed with which the company branch of Intesa Sanpaolo relating to the acquiring activity carried out in respect of over 380k points of sale was transferred to Nexi. The agreement also provides for a long-term partnership, in which Nexi becomes, in the context of acquiring, the exclusive partner of Intesa Sanpaolo and the latter, maintaining the relationship with its customers, distributes PayTech’s acquiring services. In detail, the transfer of the business branch took place through a contribution to a subsidiary of Nexi. Intesa Sanpaolo sold the shares received for the contribution to Nexi and, with part of the consideration, purchased from Mercury UK HoldCo shares of the latter equal to a stake of Intesa Sanpaolo in the share capital of Nexi of 9.9% , at a price of 653 million euros (see here a previous article by BeBeez). 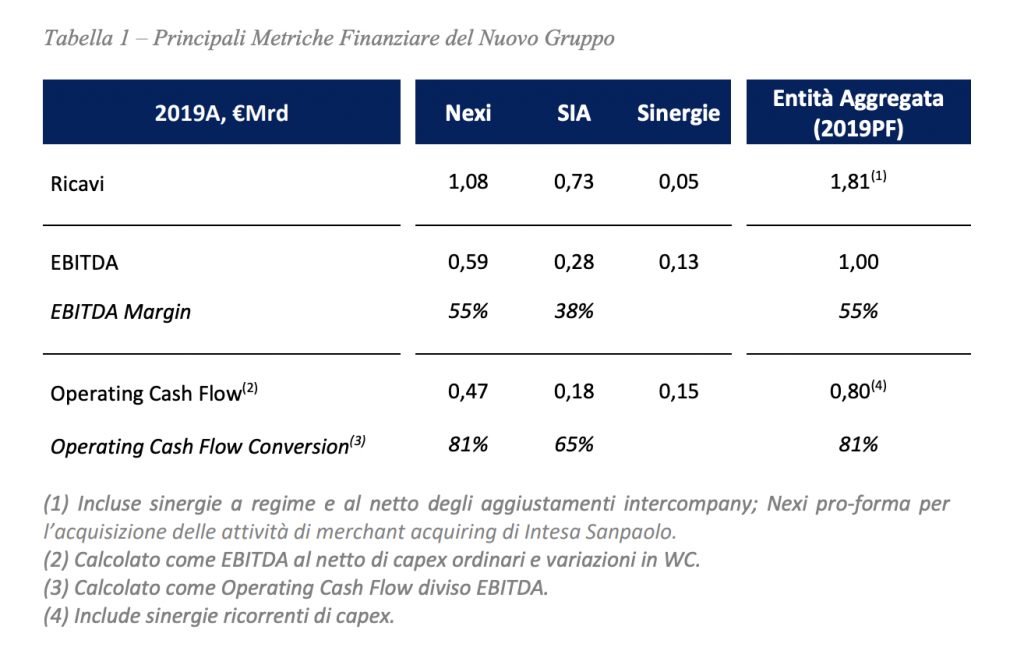 As for Sia, at the beginning of the year the Board had appointed JP Morgan as sole financial advisor for all its extraordinary transactions, including the possible listing on the Stock Exchange. The latter had been approved by the Board of Directors last February, and was expected by the summer (see here a previous article by BeBeez). But obviously the coronavirus crisis has mixed up the cards and made the merger scenario with Nexi, an alternative to the ipo, more and more probable.

At the end of January, a Goldman Sachs report assumed an enterprise value of  3-3.5 billion euros for Sia in the case of a merger with Nexi, which would give rise to a national sample with a market share of about 70% (45% Nexi, 25% Sia), generating important cost synergies. On the other hand, the ipo had been talked about since February 2019. On the occasion of the approval of the 2019-2021 business plan, the ceo Nicola Cordone had said that if Sia had decided on the ipo, he would have aimed at a raising of one billion euros. and the operation would have consisted in part in a capital increase and in part in the sale of a portion of the shares held by the shareholders (see here a previous article by BeBeez). It was said that the company could land on the stock market with a capitalization of over 4 billion euros, after a capital increase in ipo of 1-1.5 billion euros, in line with the numbers already proposed by BeBeez in the past (see here a previous article by BeBeez).

We recall that on the valuation front, the last official reference point is the figure from last November, when F2i sgr and HAT sgr sold their respective stakes in Sia to Cdp Equity and when Unicredit and Intesa Sanpaolo sold their stakes to FSIA Investimenti (30% Poste Italiane and 70% FSI Investimenti, which in turn is controlled 77% by Cdp Equity and the remaining 22.88% by the Kuwait Investment Authority). At the end of the transaction, Cdp Equity therefore bought 25.69% of Sia, while FSIA increased from 49.48% to 57.5%, for a total of 83.19% of Cdp Equity between Cdp Equity and FSIA. The rest of the capital, on the other hand, continues to be held by Banco Bpm, Mediolanum and Deutsche Bank (see here a previous article by BeBeez).  The transaction with the funds, as anticipated by BeBeez in May 2019 (see here a previous article by BeBeez) was conducted on the basis of an equity value of Sia of 2.4 billion euros and an enterprise value of approximately 3, 2 billions, equal to 12.5x the expected ebitda for 2019 and 14.6x the normalized ebitda for 2018, which was 222 million euros, after net revenues of 614.8 million and a net financial indebtness of 723.9 million euros.

The new group will be a new Italian PayTech leader in Europe, able to cover the entire digital payment value chain and to serve all market segments with the most complete and innovative range of solutions: from digital payment acceptance services. for large and small merchants, to the most sophisticated solutions for omnichannel and e-commerce, from the issue and management of all types of cards to mobile payment apps, from solutions for B2B digital payments to open banking, from solutions for local public transport to interbank networks and clearing and trading services for the main Italian and international institutions.

In recent days Equita sim estimated that, if Nexi paid Sia with a multiple equal to the average between its own and that of the listed international giant Worldline, i.e. 18x the ebitda expected for 2021, there would be a creation of value of one euro for share with synergies equal to 100 million euros, while if Nexi had to pay Sia with the multiple paid for Intesa Sanpaolo’s assets (10x ebitda), the creation of value would be 5 euros per share. Equita sim has a hold rating and a target price of 15 euros on the Nexi stock. Mediobanca Securities, on the other hand, confirmed the outperform rating and the target price of 17 euros. On Friday 2 October Nexi closed down 3.15% in Piazza Affari at 16.885 euros per share, equal to a capitalization of 10.92 billion euros.

Nexi, on the other hand, closed 2019 with 984.1 million euros in revenues, an ebitda of 502.5 million and a net financial position of 1.47 billion, a clear improvement from 2.45 billion at the end of 2018, thanks to the repayment and refinancing of past debt (see here a previous article by BeBeez) and cash generation for the period. Last April, Nexi then placed 500 million euros of unsecured equity-linked senior bonds maturing in 2027 to finance part of the consideration provided for the acquisition of the merchant acquiring activities from Intesa Sanpaolo (see here a previous article by BeBeez).

The announcement of the merger between Nexi and Sia comes after the extension to 2033 of the contract with Unicredit, Sia’s main customer, which will pay upfront commissions of 233 million. In fact, in 2016 the latter had acquired from Unicredit the payment processing activities through its own payment cards in Italy, Germany and Austria (see here a previous article by BeBeez).  This is a business that at the time involved the process of 13.5 million cards, 206,000 POS and 12,000 ATMs in total in the three countries. All for a price of 500 million euros, equal to 12x the ebitda, then more than 41 million euros, after 108 millions in revenues.

Nexi’s ceo, Paolo Bertoluzzo, commented: “This operation will give life to a great Italian PayTech leader in Europe, a great technological and digital excellence with scale and skills that will allow it to play an increasingly leading role in Italy. and at an international level in a market, such as the European one, in strong consolidation. The new PayTech, thanks to its independent role and the entry of Cdp in the shareholding structure as anchor investor, will be able to continue on its growth path as a large Italian public company and contribute in an even more decisive way, together with its partner banks, to acceleration of the spread of Digital Payments in Italy and the digitization and modernization of our country, for the benefit of citizens, businesses and the Public Administration. The combination of two extraordinary teams like those of Nexi and Sia, which boast the best resources and skills in the field of technology and digital innovation in this sector at an international level, represents a strength for the development of increasingly advanced solutions to benefit of all partner banks and all other customers. I believe that this initiative should be a source of pride for the people of Nexi and SIA and that it represents a great opportunity for everyone “.

The CEO of Sia, Nicola Cordone, declared: “The integration of two important hi-tech groups such as Sia and Nexi will allow us to create, thanks to the fundamental role and support of CDP, a single, great Italian player in leading digital payments in Europe, with a wealth of know-how, people and skills at world-class levels. This operation will help to give a further boost to the digitization process of our country towards a cashless society. This reflects the mission we have been carrying out, with pride, commitment and dedication, for over 40 years, placing citizens, businesses, financial institutions, central banks and public administration at the center of the payment systems revolution. And today, by joining the forces of two excellent companies such as SIA and Nexi, we want to continue to lead innovation with even greater emphasis, offering cutting-edge technological infrastructures and services, and affirm our leadership at European level in a sector, such as that of electronic payments, in continuous consolidation “.