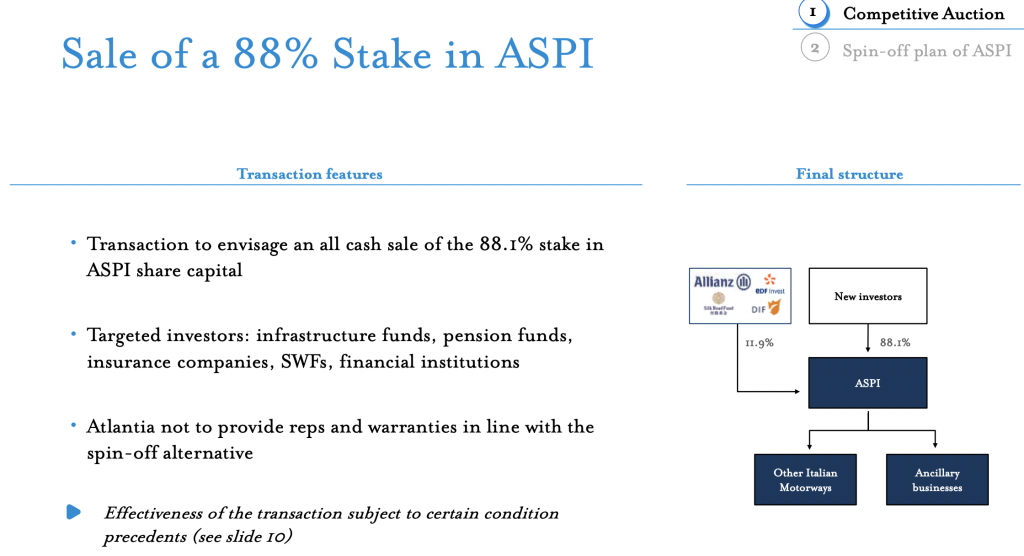 Cdp, Blackstone Infrastructure Partners and Macquarie Infrastructure and Real Assets tabled a bid for acquiring 88.06% of Autostrade per l’Italia (ASPI) from Milan-listed Atlantia (see here a previous post by BeBeez). Atlantia agreed to hold exclusive talks to Cdp and its partners until 18 October, Sunday. Market participants expect ASPI’s value to amount to 11 billion euros with a RAB-based calculation. In 2017, Aspi launched a capital increase on the ground of an enterprise value of 14.8 billion and sold 11.94% to Allianz Capital Partners, EDF Invest, DIF, and Silk Road Fund. However, on 20 October, Tuesday, the directors of Atlantia said that Cdp, Macquarie and Blackstone must sweeten their offer that is worth 9.5 billion, according to press reports (see here a previous post by BeBeez). Atlantia agreed an extension of exclusive talks to 27 October, Tuesday in view of the shareholders meeting scheduled for 30 October, Friday.

Mandarin Capital Partners (MCP) invested in Nuova Fapam, a producer of hair care items (See here a previous post by BeBeez). The Parnazzini Family sold the business, Maria Parnazzini will keep her chairwoman role and her sons Alessandro and Nico Parnazzini will be the company’s ceos. Nuova Fapam aims to generate a turnover of 50 million euros from the current 18.45 million. The firm has an ebitda of 4.8 million and net cash of 5.72 million.

Sinergia Holding raised to 100% its stake in private equity Synergo (see here a previous post by BeBeez). In December 2019, Sinergia acquired all the stake of Gianfilippo Cuneo, Synergo’s founder, and part of that of 20% that belonged to Italian Mezzanine, a company of Roberto Liguori that now carried on a full exit. Sinergia rebranded the fund as Synergo Capital. Sinergia Holding belongs to Paolo Alessandro Bonazzi, Simone Crolla, Gabriel Monzon Cortarelli, and Alessandro Ermolli. Synergo’s directors are Paolo Alessandro Bonazzi (president), Simone Andrea Crolla (vicepresident), Gabriel Monzon Cortarelli (ceo), Alessandro Ermolli, Massimiliano Riva, and Simone Cremonini. Earlier in January, Synergo launched Sinergia III and Sinergia Venture, a late stage venture capital fund with a fundraising target of 150 million euros. Sinergia is a private equity that aims to invest in Italian companies willing to grow in the American market, with a fundraising target of 200 million.

Vam Investments and Adon Capital acquired Sicurezza e Ambiente (Sea) from the founder Angelo Cacciotti (see here a previous post by BeBeez). Banco Bpm and Illimity financed the buyers. Giovanni Scognamiglio and Carlo di Biagio will keep their roles of ceo and chairman. Sea has sales of 18 million euros and an ebitda of 6 million.

Kairos Partners managers Guido Brera, chief investment officer of the asset management unit, Rocco Bove, head of fixed income and Massimo Trabattoni, head of Italian equity, acquired a 30% of the company while Julius Baer owns 70% (see here a previous post by BeBeez). The interim ceo Fabrizio Rindi will pass over the role to a new head and act as chairman from 2021. Kairos will hire further key executives.

VeNetWork a club deal vehicle that groups 58 entrepreneurs from the North Eastern Italian Region of Veneto, acquired 75% of Tris Ottica, a third-parties producer of eyewear company (see here a previous post by BeBeez). Tris Ottica shareholders sold such a stake for solving generational issues and kept ceo Mario Righes in his role. Tris Ottica has sales of 11 million euros.

Intecno, a non-operative holding of Gruppo Ego that finances projects in the fields of water supply, energy and the environment, sold to Alperia its 50.1% of Hydrodata, a an engineering firm (see here a previous post by BeBeez). Hydrodata has sales of 3.94 million euros and an ebitda of 0.246 million. Alperia is the multiutility company that belongs to the Municipalities of the Alto Adige Region that has sales of 1.6 billion, an ebitda of 237 million, net profits of 56.2 million, and a net financial debt of 395.8 million.

London-based private equity Zetland Capital might acquire 90% of Mare Nostrum Romae, a company in receivership since 2018 that belongs to Domenico Ricciardi and is working on the construction of the aquarium Acquario di Roma Sea Life (see here a previous post by BeBeez). British Merlin Entertainment, the controlling shareholder of theme park Gardaland, will manage the aquarium. KIRKBI, the investment holding of the Kristiansen Family (75% owner of toys giant Lego), Blackstone and Canadian Pension Plan Investment Board delisted Merlin from the London Stock Exchange. In December 2019, Zetland Capital Partners raised 372 million euros in commitments, well above an initial target of 300 million.

Searchlight Capital aims to sell its 49% of Italian broadband provider Eolo on the ground of an enterprise value of 800 million – 1 billion euros (See here a previous post by BeBeez). Eolo’s expected ebitda amounts to 80 million with a turnover of 157 million. Luca Spada (ceo and founder) and Elmec Group own 51% of the company. Searchlight acquired its stake at the end of 2017 and announced the intention to implement a 300 million investments plan for 2018-2020. Earlier in May, Spada announced a further investment plan of 150 million after having received a financing facility of 155 million in January.

Milan-listed Banca Profilo attracted bids for its 62.4% that belongs to Sator Private Equity Fund (see here a previous post by BeBeez). Lazard is handling the process that started in June. Rumours said that Matteo Arpe, the founder of Sator, could buy this stake. Sator Private Equity belongs to Sator of which Arpe has 67.5% (and 20% of the fund). Further investors in Sator are the Angelini Family, the Brachetti Peretti Family, Luigi Berlusconi, Fondazione Roma, and Fondazione Mps. Banca Profilo also attracted the interest of Banco Desio, Lombard Odier, Julius Baer, and Attestor Capital, which owns the Italian private bank BIM. Banca Profilo has a market capitalization of 133 million euros, while the equity in 1H20 is worth 164.4 million.

Investindustrial could sell Polynt-Reichhold in early 2021 on the ground of an enterprise value of 1.5-2 billion euros (See here a previous post by BeBeez). The chemical company has sales of 2 billion, an ebitda of 241 million and a net financial debt of 300 million. Earlier in February, the company refinanced its 506 million gross long-term debt with a new senior secured facility of 475 million euros for which JPMorgan acted as sole bookrunner, a new revolving line of 100 million and a long terms senior secured loan of 60 million. Such a loan allowed Polynt to pay a dividend of 125 million. Investindustrial is also monitoring the sale of a Specialty Ingredients unit of Swiss group Lonza. The asset is worth 3-3.5 billion of CHF and could attract the interest of potential bidders for Polynt-Reichhold. The company was born in 2017 out of the merger between Italy’s Polynt and US-based Reichhold Industries, which belonged to Black Diamond Capital Management, JP Morgan Investment Management, Third Avenue Management, and Simplon Partners. These funds invested in the senior bonds of Reichold that defaulted in 2014 and converted the debt in equity.

Bios Line, an Italian producer of natural cosmetics and food integrators, attracted the interest of private equity 21 Investimenti (see here a previous post by BeBeez). Ethica Corporate Finance is handling the sale process since July 2020 and sent the teaser to Idea Taste of Italy, Aksia, NB Renaissance Partners, Clessidra, White Bridge, and other private equity investors. Paolo Tramonti, the ceo of Bios Line, founded the company in 1990. Bios Line has sales of 30 million euros with an ebitda margin of above 20%.