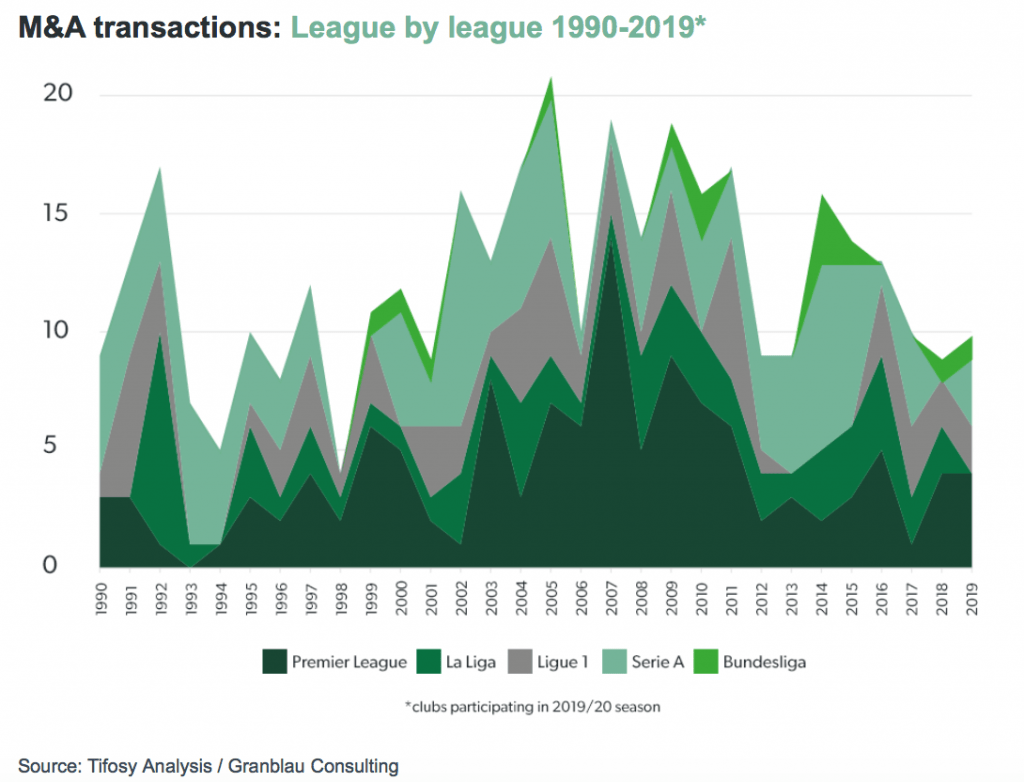 The football teams of the main five European football leagues closed 369 m&a transactions between 1990 and 2019 (see here the Insight View by BeBeez, available to BeBeez News Premium subscribers; an English translation will be available soon). The amount of deals closed a 133 peak between 2004 and 201m said a report of the crowdfunding platform Tifosy and of Granblau Consulting. The report said that further m&a transactions could take place as teams need equity partners given the coronavirus turmoil.

Investindustrial sold its remaining 4.12% stake in iconinc British car maker Aston Martin Lagonda (see here a previous post by BeBeez). Earlier in May, Investindustrial started to sell its 20.92% stake. At the end of June, Aston Martin raised 152 million pounds in a capital increase subscribed by institutional and private investors precisely to tackle the problems arising from the Covid-19 emergency. Investindustrial subscribed the capital increase for 11.8 million. The private equity fund acquired Aston Martin in 2012 and paid 150 million for its stake and made available 80 million for eventual further capital increase aimed at financing an investment budget of 500 million. Investindustrial acquired the company on the ground of an enterprise value of 740 million. The company was then listed in 2018. After a recapitalization last March, the major shareholder is now a consortium of investors (Yew Tree Consortium) led by Canadian entrepreneur Lawrence Stroll.

Again Investindustrial listed on NYSE Investindustrial Acquisition Corp (IAC), a SPAC that aims to raise 350 million US Dollars (296 million euros) (see here a previous post by BeBeez). IAC’s shares price will be of 10 US Dollars with the option to increase the offer to 402 million US Dollars. The vehicle aims to carry on a business combination with a target with an enterprise value of 1 – 5 billion. Sergio Ermotti, Roberto Ardagna and Alberto Cicero will be the chairman, the ceo and the cfo of IAC. Dante Roscini, Michael Karangelen and Teensie Whelan will join the company’s board of directors. Ermotti is about to resign from his role of ceo of UBS (Ralph Hamers will replace him) and will take on his chairman role from January 2021 when he will also lead Swiss Re. IAC will sign a forward purchase agreement with its sponsor that will commit to buy up to 25 million shares at 10 US Dollars each.

IFM Investors, Brebemi through its Spanish subsidiary Aleatica, siged the closing of the acquisition of a 55.8% stake of Autostrade Lombarde, which owns 80% of Società di Progetto (see here a previous post by BeBeez). Aleatica also acquired 0.0542% of BreBeMi. The seller in both deals was Intesa Sanpaolo that so made a full exit from BreBeMi and its controlling vehicle. The parties had announced such a transaction earlier in June on the ground of an enterprise value of 2.4 billion euros. Aleatica also acquired the credit of the shareholding financing that BreBeMi and Intesa subscribed on 15 October 2019, which amount to 30 million of principal and interest. Aleatica also purchased hybrid instruments worth 9 million that the company issued earlier in January. After such transactions BreBemi appointed Francesco Bettoni (ceo), Rocco Corigliano, Joaquin Gago, Roberto Hombrados, Ruggero Magnoni, Riccardo Marchioro, and Rafael Moreno as directors in charge until the end of 2022. BreBeMi is the first Italian acquisition of IMF Global Infrastrucuture Fund and Aleatica. IFM Investors is based in Austriala and belongs to 27 pension funds. IFM invests in infrastructures, debt, listed and private equity, and its assets under management amount to about 95 billion euros.

Premuda, the Italian shipping company that belongs to Pillarstone Italy, is preparing to sign a joint venture with Columbia Shipmanagement (CSM) and brand it as CSM Italy (see here a previous post by BeBeez). CSM will manage the 28 vessels fleet that Premuda is handling together with FINAV, the fund for the management of shipping credits of Davy Global Fund Management that Pillarstone subscribed. The ceo of CSM Italy will be Xanthos Kyriacou. Premuda has sales of 40.2 million euros (36.2 million in 2018), an ebitda of 13 million (10.9 milioni) and a net loss of 1.9 million.

Cherry Bay Capital, part of Montecarlo’s CBC Group, invested 17.5 million euros in Tecnomatic through a club deal (see here a previous post by BeBeez). CBC Group will acquire a stake in the target company, buy a minority through a capital increase  and subscribe a convertible bond. Tecnomatic has sales in the region of 30 million euros, with an above 20% adjusted ebitda margin and aims to grow through the acquisition of targets that already identified. Tecnomatic was born in 1998, when its current chairman and ceo Giuseppe Ranalli acquired two SMEs in distress through a leverage buyout transaction of above 1.1 million.

Equinox and Aksìa are the frontrunners for the acquisition of Femar Vini, an asset for which Mediobanca is acting as sell-side advisor (see here a previous post by BeBeez). Femar Vini belongs to second-generation owner Felice Mergè and has an ebitda of 11 million euros. Clessidra withdrew its interest in the company and also suspended talks for acquiring Botter, another wine producer, together with Italmobiliare. Ghost Wine, a supplier of Botter, is facing an allegation of wine adulteration. The funds would have received the support of the private debt and direct lending funds of Muzinich, Banco Bpm, Bnl, and UBI Banca for acquiring Botter for  300-330 million euros from IdeA Taste of Italy, which acquired the company in 2018. Botter has a turnover of 217 million.

Growth Club Capital (GCC), a club deal of investors that Luigi Pugliese founded for investing in Italian SMEs, set an investment target of 30 million euros for companies with sales of 5-20 million (see here a previous post by BeBeez). Further members of GCC are Paolo Bassetti, Gerardo Braggiotti, Fulvio Conti, Federico Ghizzoni, Nino Lo Bianco, and Roberto Nicastro. GCC invested in Mia Platform, an IT company through a 5 million subscription of a capital increase for a 22.5% stake.  GCC is also in advanced talks for investing in an undisclosed cloud computing company with sales of 20 million, cash of 5 million and a 7 million ebitda.

TrenDevice listed on Milan market after having raised 2.7 million euros for an initial market capitalization of 9.94 million (0.81 euros per share) and a 27.16% publicly traded equity (see here a previous post by BeBeez). Before launching an ipo, the company had raised more than 440k euros through an equity crowdfunding campaign on CrowdFundMe. Trendevice has sales of more than 7.2 million. The company will invest the proceeds of the ipo in its organic development. Antonio Capaldo is the chairman and ceo of TrenDevice.

One Equity Partners raised from 5,40 to 5,70 euros (+5.6%) per share its public offer on Milan-listed Techedge  and lowered the threshold for the offer acceptance  to 50% plus one share from previous 66.67% (see here a previous post by BeBeez). However, on 26 October Techedge’s ceo and 32.04% owner Domenico Restuccia signed a syndicate pact with shareholders Equilybra, Pietro Migliavacca and Massimo Compagnoni grouping 53.11% of the shares with the aim not to accept the offer (see here a previous post by BeBeez). Furthermore, Mr. Restuccia committed to buy a further 1.22% of Techedge by 31 December 2020. So the syndicate pact will have 54.336% of the company and block the public offer even though One Equity acquired 2.76% of Techedge from Antonio Di Perna and built a 43.3% stake in the target.

Impresa San Siro American Funerals acquired Italian competitor Concordia from Eurolegno, part of the Lorandi Group (see here a previous post by BeBeez). The vendors will reinvest in a minority of HOFI, the holding that belongs to Augens Capital and BMO Global Asset Management and controls San Siro that after such a buy will generate sales of above 30 million euros. Concordia has a turnover in the region of 8 million. In February 2019, San Siro’s second generation owners Andrea and Massimo Cerato (chairman and ceo) sold a controlling stake to HOFI. The vendors reinvested for a 20% stake.

Värde Partners is in talks with the Mezzaroma Family for acquiring a controlling stake or the whole of the holding Impreme (see here a previous post by BeBeez). Varde currently owns 40% of the target. In September 2017, the creditors of Impreme accepted a debt restructuring agreement. Varde acquired almost 200 million euros of Impreme’s credits from Aareal Bank, Banco Bpm and UniCredit (142.3 million). Varde previously committed to invest 75 millions in Impreme and acquired the 221 millions worth credits of MPS with the company. Roumours say that Luca Malighetti, managing partner of Värde in Italy, aims to expand the business of the subsidiary Guber Banca to the financing of real estate businesses. companies in the real estate sector. Värde acquired a 33% stake in Guber Banca in March 2017.

Synergo Capital sold its 24.5% of Raccortubi to Commerciale Tubi Acciaio (CTA) while Luca Pentericci keept the majority of the business (See here a previous post by BeBeez). Raccortubi sold this stake to Synergo in 2015 for financing the acquisition of Petrol Raccord. The company has sales of 62.8 million euros with an ebitda of 0.594 million.

TechVision, an Italian eyewear company of which Ethica Global Investments has 40%, acquired 75% of DM Tecnik (see here a previous post by BeBeez). DM Tecnik has sales of 3 million euros.

KKR acquired from the Ponti family a 70% of packaging business Cmc (see here a previous post by BeBeez). Alantra assisted the vendors Giuseppe Ponti and his kids Francesco and Lorenzo. Earlier in May, the company launched a capital increase of 2.5 million euroa and issued two minibonds for a total of 7 million that Riello Investimenti Partners subscribed. Cmc has sales of 61 million with a 16% adjusted ebitda.

Francesco Illy’s 23% in Illycaffè attracted the interest of Bain Capital (see here a previous post by BeBeez). The asset previously also attracted the interest of Peninsula Capital on the ground of an enterprise value of one billion euros. Riccardo, Andrea and Anna Illy have a preemption right on the stake of their brother Francesco that is worth 200-250 million and are also assessing the offer of FSI. The asset is also of interest to Rhone Capital. Bain Capital would support Illycaffè’s plans for expanding in the USA. The company’s minority previously attracted the interest of Advent, Oaktree, TowerBrook, Blackstone, and an undisclosed Qatar’s bidder. (si veda altro articolo di BeBeez). Il Polo del gusto (the company of Riccardo Illy that owns the brands Dammann Frères, Domori, Prestat, Agrimontana, and Mastrojanni) is also looking for a 20%-40% partner on the ground of an enterprise value of 250 million. Il Polo del Gusto has sales of 89 million.

Eos Investment Management, the UK manager of alternative assets, is ready to start operations of its new EOS ReNewable Infrastructure, as it is going to reach soon its 100 million euros closing ahead of a fundraising target of 250 million with a hard cap of 350 million, the founder Ciro Mongillo said to BeBeez (see here a previous post by BeBeez). The Pension fund of Italian Lawyers committed for 20 million. Eos will invest in Italy and Europe and target  grid parity photovoltaic plants in their development stage.

Sonnedix, a solar energy company of which JP Morgan Asset Management owns a controlling stake, acquired a photovoltaic plant of 1,3 MW from Genergy (see here a previous post by BeBeez). Axel Thiemann is the ceo of Sonnedix.

Gruppo Tonazzo, the owner of the brand Kioene, hired Bzm for finding a financial partber on the ground of an above 200 million euros enterprise value (See here a previous post by BeBeez). The company already attracted the interest of Ambienta, Lion Capital, Taste of Italy, Charterhouse, and Trilantic. Tonazzo has sales of about 80 million and an ebitda of 14 million that in 2021 could amount to 21 million.