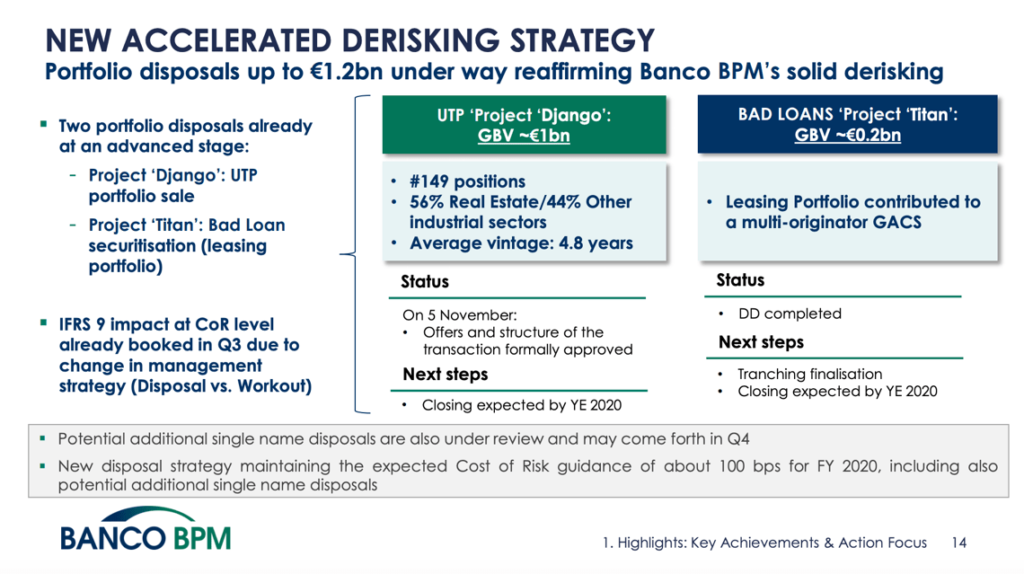 AMCO and Credito Fondiario acquired the majority of Banco BPM’s Utp portfolio worth one billion euros (see here a previous post by BeBeez). By the end of 2020, AMCO will also acquire 8.1 billion of distressed credits that are part of Hydra of Banca Mps.

PwC Italia and Polis Fondi sgr signed a partnership for launching a fund for acquiring UTP corporate credits from banks in exchange of money or stakes of the vehicle (see here a previous post by BeBeez). Polis Fond, in partnership with Assilea (the Italian Association of Leasing Companies) is also working at the project of a similar fund targeting mid-size leasing NPEs in the books of mid-size leasing companies.

As a consequence of the coronavirus turmoil Italian companies may need 47 billion euros in new capital from investors to cover losses and finance their relaunch (10 billions for the defaults and 37 billion ofr a shrink in sales) Cerved’s Report PMI 2020 says (see here a previous post by BeBeez). Moreover with a harder recession Italian companies may need up to 68 billions (19 billion for the defaults and 50 billion for the shrink of sales).

On 22 October, Thursday, Milan Court said that Dentix Italia bankrupted (see here a previous post by BeBeez). The company’s creditors will hold a meeting in mid January. Earlier in July, Dentix Italia applied for receivership. KKR financed Dentix at the end of 2016 with a direct lending of 200 million euros. Dentix financial debt amounts to 160 million (140 million with KKR and 20 million with BBVA). BBVA, Cetelem, Pepper Money, and Abanca provided a 200 million facility for financing the company’s clients.

Seci, the holding of Gruppo Maccaferri, is holding talks with London’s Taconic Capital for a financing facility of 90 million euros (see here a previous post by BeBeez). Seci would invest 20 million for paying its employees and 70 million buying back the 90 million bond issued in February 2019 for which it provided as collateral 46% of Manifatture Sigaro Toscano (MST) that is worth 200 million. Gaetano Maccaferri subscribed 10 million of the bond and would give up the repayment for buying the residual part of it. MST belongs to Seci (51%), Piero Gnudi, Luca Montezemolo and Aurelio Regina (49%). Gnudi and Montezemolo also subscribed Seci’s bond. Seci’s banking debt amounts to 780 million.

Groupama am sgr will extend the tenure of its Supply Chain Fund while working on the launch of two further funds (see here a previous post by BeBeez). One of the vehicles will be the Supply Chain Fund II and will be launched at the beginning of 2022, while the other one will be launched by H1 2021 and support Italian SMEs with mid and long-term loans with the warranty of Mediocredito centrale (MCC) and Sace, Alberico Potenza, the coo of Groupama said to BeBeez. This latter fund aims to raise at least 200 million euros. All invoices and loans will be trated on the fintech platform Fifty as invoices are actually traded for Supply Chain Fund.

Unicredit and Milan-listed yachts producer Sanlorenzo signed a partnership for supporting the production chain of the nautic sector with the U-Factor Confirming system (see here a previous post by BeBeez). UniCredit Factoring allocated 15 million euros for financing the working capital of the suppliers of Sanlorenzo and a further 5 million for financing the suppliers of its subsidiary Bluegame. Earlier in June, Sanlorenzo signed a similar partnership with Intesa Sanpaolo.

Confidi.net and Cofiter merged and created Fider, a company with a 25% Cet1 (se here a previous post by BeBeez). Marco Amelio is the chairman of Fider of which are part 25,000 companies. Luigi Olivi is Fider’s coo.  Both Confidi are active as investors in minibonds and in grating guarantees on minibonds issues.

Filippetti received from Cassa depositi e prestiti and Finlombarda a financing facility with the warranty of Sace (see here a previous post by BeBeez). The loan has a five-years tenure with an amortizing reimboursement and will support the company’s working capital. In early 2017, RiverRock Italian Hybrid Capital Fund paid 9 million euros for acquiring a minority of Filippetti through a capital increase and a senior financing of 7 years. Fillipetti has sales of 67.5 million, an ebitda of 1.9 million and a net financial debt of 17.6 million.

Domori, a subsidiary of Gruppo Illy, aims to issue two minibonds between the end of 2020 and early 2021 for a total of 5 million euros, said ceo Andrea Macchione (see here a previous post by BeBeez). The company will invest the proceeds of the issuances in the integration of UK brand Prestat which it acquired last year and in its organic growth. Both bonds will pay a 3.5% – 4% coupon. With the acquisition of Prestat, Domori’s sales would amount to 28 million euros.

Citieffe, a subsidiary of Swiss Medistream since 2015, raised a financing facility of 9 million euros from Illimity (see here a previous post by BeBeez). Gruppo Medistream belongs to ArchiMed since 2014, when the fund invested 12 million in the company’s capital increase together with ceo Alberto Soccianti and the other managers.