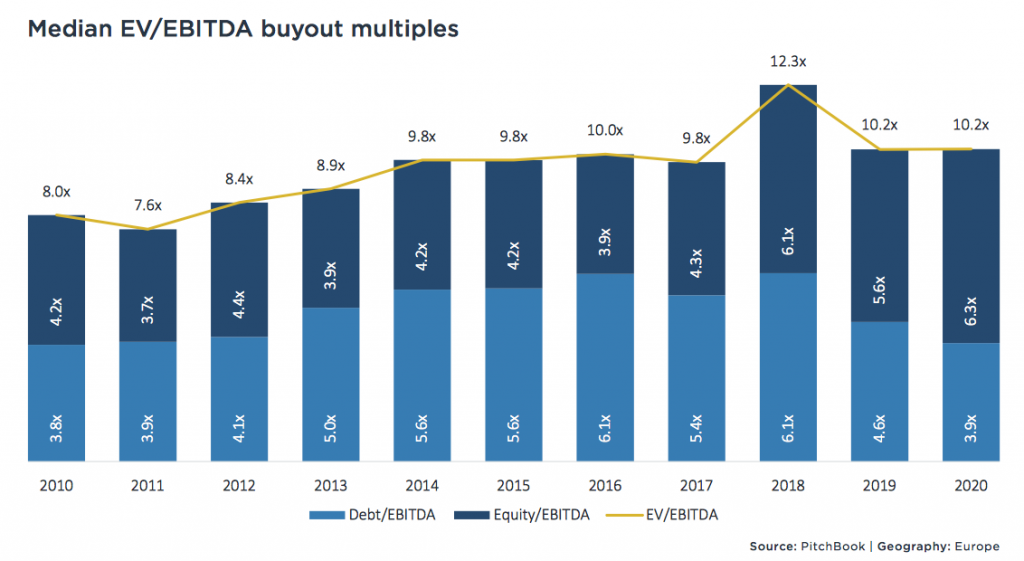 In 2020, European private equity funds closed 4,179 deals worth 449.1 billion euros (down in the region of 3% from 2019), says PitchBook European PE Breakdown 2020 (see here a previous post by BeBeez). The coronavirus turmoil slowed down the activity between the first two quarters of 2020. PitchBook’s report says that in 2021 the private equity activity may be worth 480 billions. However, inflationary pressures and the subsequent interest rates increase may have a negative impact on private equity activities. We recall that BeBeez Private Data, the private capital database of BeBeez, calculated that in 2020, private equity investors  closed 360 transactions in Italy (317 in 2019),  of which 133 direct investments (149), 125 add-on buys of Italian targets made by Italian or foreign portfolio companies (63) and 13 add-ons of foreign targets made by Italian portfolio companies private equity  (15). See here the BeBeez Private Equity Report 2020 (available to the subscribers of BeBeez News Premium and BeBeez Private Data Combo) Pitchbook also stressed that there was a real boom in business combinations closed in the US in 2020 by the SPACs (220) in contrast to what happened in Europe where  only 4 business combinations were closed, one of which in Italy (on Franchi Umberto Marmi) and another made in Holland by a SPAC promoted by an Italian team (on CM.com). According to PitchBook, in the US there is now the risk of an oversupply of SPACs while there are interesting opportunities in Europe. On this issue, BeBeez‘s Insight View of last December 24, 2020 (available to the subscribers of BeBeez News Premium and BeBeez Private Data Combo) recalled that up to that moment  247 Spac had been listed in the US in 2020 or almost 4x compared to the 59 SPACs listings in 2019 , while the capital raised so far had been 82.7 billion dollars against only about 13.6 billions in 2019 and versus a total of 472 SPACs listed since 2009 that have raised a totale of 129.5 billion dollars.

Milan-listed IT player Sesa (which had been listed in 2013 thanks to the business combination with Made in Italy 1,  the first Italian SPAC), acquired Me.R.Sy. from Diebold Nixdorf, an US-based producer of hardware and publisher of software for the banking and retail sectors (see here a previous post by BeBeez). Sesa also acquired 55% of Palitalsoft, a provider of digital services to the public administration (see here a previous post by BeBeez). Sesa has sales of 1.77 billion, an ebitda of 94.5 million and net cash of 54.7 millions.

Edison, part of French-listed EDF, acquired the remaining 70% stake in E2i Energie Speciali from Italian infrastructure fund F2i and sold Infrastrutture Distribuzione Gas to 2i Rete Gas, a company owned by investment funds managed by F2i, Ardian and Apg and the second largest operator at national level in the gas distribution sector (see here a previous post by BeBeez). Both deals were expected as talks had been up since September 2020 (si veda altro articolo di BeBeez).

Tages Capital acquired a further 28 photovoltaic plants based in Italy, 12 of them from Viridis Energia and the remaining 16 from Equiter (see here a previous post by BeBeez). Umberto Quadrino, the chairman of Tages, said that by May 2021, the fund aims to raise 350-400 million euros for Tages Helios II, the vehicle for investing in photovoltaic assets.

Today will end the tender period for the public offer that Temistocle launched on Milan-listed IT company Techedge (see here a previous post by BeBeez). Temistocle, the vehicle that Techedge’s ceo Domenico Restuccia created together with his backers, launched this offer on 28 December 2020 after having caused the unsuccess of a previous take over offer launched by One Equity Partners. Mr. Restuccia and his partners are not going to delist the company and will invest up to 62.5 million euros or 5.4 euros per share for acquiring 44.89% of Techedge

Laborfonds, a pension fund based in the North Eastern Italian Region of Trentino-Alto Adige, will invest up to 30 million euros in funds of private equity and private debt funds part of Progetto Economia Reale that Cassa Depositi e Prestiti sponsored through Fondo Italiano d’Investimento (FII) (see here a previous post by BeBeez). Laborfonds will invest 20 million in the private debt sector and 10 million in private equity.

Enrico Arietti, Giovanni Cavallini, Attilio Arietti, and Riccardo Triolo launched Search Fund Club (SFClub) a club deal vehicle that will invest in 15-20 European search funds (see here a previous post by BeBeez). SFClub already raised 750k euros ahead of a target of 800k euros for financing the operations of scouting, due diligence and investiment of the potential search funds. SFClub will invest 20 – 25 million in this asset class. SFClub already invested in SDG Transmission, a French fund that Stephane Gounari launched, and Czech SGMO, that Tomas Zbynowsky launched. SFClub is also holding talks with two Italian search funds, two in France and one in the UK.

Capital & Management (C&M), the investment holding of Pasquale Ambrosio, acquired Italian fashion firm Atos Lombardini from D’avant garde Tricot, the company of Tabaroni (see here a previous post by BeBeez). Atos Lombardini founded the eponymous company in 1986 that his daughters Elena and Alessandra managed since 2015, when the firm applied for receivership. In December 2016, Bologna Court issued a bankruptcy sentence for the company. C&M hired Nadia Giroldi and Simona Spaggiari as creative directors.

Milan-listed asset manager Azimut and Peninsula launched AZ Eltif Peninsula Tactical Opportunities, a private equity Eltif (see here a previous post by BeBeez). The fund has a fundraising target of 150 million euros and aims to acquire relevant and majority stakes in Italian and eventually European targets. Peninsula will act as advisor, while Azimut will handle the Eltif’s operative management and the fundraising.

Hellman&Friedman, which controls the group active in the development of software for companies and professionals Teamsystem, has sold it to itself. In detail, Brunello Bidco spa, a subsidiary of Hellman & Friedman Capital Partners IX, has signed an agreement to acquire Barolo Lux 1 sarl, the company that controls 100% Teamsystem and which in turn is 87.9% owned by a vehicle of the Hellman & Friedman Capital Partners VII fund and is owned for the rest by HG Capital fund (8.5%) and the managers of Teamsystem (3.6%). Both HG Capital and the managers will reinvest for a minority in Brunello Bidco (see here a previous post by BeBeez). In December 2015, Hellman&Friedman acquired Teamsystem from HG Capital, which reinvested for a minority while Bain Capital sold all its stake in the company. Federico Leproux is the ceo of TeamSystem which has sales of 417.9 million euros with an adjusted ebitda of 170.5 million and a net financial debt of 750.9 million.

Benvic Europe, a French PVC producer that since 2018 belongs to Investindustrial Growth, acquired from Celanese, an Italian chemical company, the compounding production activities based in Ferrara Marconi (sse here a previous post by BeBeez). The acquisition of Celanese’s compounding business represents the eighth acquisition made by Benvic in Europe after Investindustrial’s entry into the capital in 2018. In Italy, in particular, Benvic has completed 5 deals. In addition to this last investment in Ferrara, again in Ferrara Benvic had bought Vinyloop in 2018. In 2019 Benvic had acquired Plantura and Modenplast, leader in the production of compounding and tubes dedicated to the medical sector. Furthermore, in September 2020 Benvic took over the majority stake in Luc & Bel, a group specialized in the design and manufacture of components of excellence for medical devices aimed at large international customers. Out of Italy Benvic has instead taken over the Polish Alfa PVC and the French Ereplast (leader in the production of biopolymers).

Ethica Global Investments, a club deal vehicle for private equity investments that Ethica Group launched, acquired 80% of Sil Fim, an Italian producer of ironing machines and fume hoods, from the founder Walter Darini (See here a previous post by BeBeez). Riccardo Remedi will be the ceo of Sil Fim. Sil Fim was born in 2009 out of the merger of Silc, a producer of industrial ironing machines, and Fim, a manufacturer of hoods. Sil Fim has sales of 10.3 million euros, an ebitda of minus 0.714 million and net cash of 12 million. Ethica Global Investments has resources of 100 million for investing in Italian SMES and Italglobal Partners, whose founders are Ruggero Jenna and Francesco Sala, is its manager. Ethica Global Investments is one of the private capital investors that BeBeez Private Data monitors. Find out here how to subscribe to the Combo version that includes BeBeez News Premium

Capital Dynamics and EOS Investment Management (EOS IM), an English manager of alternative assets that Ciro Mongillo created, acquired the authorizations for building three photovoltaic plants with a power of 87 MW in the central Italian Lazio region (See here a previous post by BeBeez). EOS IM is currently carrying on the fundraising for its infrastructure and renewable energy EOS ReNewable Infrastructure Fund and set a target of 250 million euros with a hard cap of 350 million.

Oaktree acquired 70% of Col Giovanni, an Italian producer of components for smart grids for energy, and its subsidiaries Seb and Col GP Maroc (See here a previous post by BeBeez). Intesa SanPaolo, Banca Ifis, Credit Agricole, and UBI Banca financed the buyers. The Col Family will reinvest in the company for a 30% stake. Oaktree will also acquire 51% of MCM, a producer of measuring transformers for medium-voltage current and related sensors. Col has sales of 92.6 million euros with an ebitda of 23 million and net cash of 8.1 million. MCM has sales of 3.9 million with an ebitda in the region of 0.45 million and net cash of 0.109 million.

On 14 January came to its end the tender period for the public offer that BC Partners launched on Milan-listed producer of machinery for the industrial packaging IMA whose controlling shareholder is the Vacchi Family (see here a previous post by BeBeez). The buyers invested 746 million euros for 25.389% of the target as they could buy 78.815% of the shares on which they launched the offer. BC Partners previously acquired 5.894% of IMA and will acquire the remaining publicly traded shares for 6,8 euros each ahead of a delisting due for 28 January, Thursday.

Heritage Ventures, an Irish investment company  with a focus on ICT and telco sectors, acquired 20% of Metoda, an Italian R&D firm for the technological infrastructure and telecommunication sector (See here a previous post by BeBeez). Exor Ventures has 80% of Metoda which has sales of 19.8 million euros, an ebitda of 3,000 euros and a net financial debt of 5.13 million.

Milan-based accountancy and financial firm Spada Partners opened shop in Bologna and in Rome (see here a previous post by BeBeez). The firm hired Mario Ravaccia and Francesco Molinari as new partners for heading the bureaus. Spada also hired as partners Alberto Ventura for Bologna and Roberto Fracassi for Rome. All these new partners previously worked for Studio Gnudi.

International Law Firm Dentons launched an Italian service unit for ESG that will be part of the European Sustainability Expert Team (ESET) (see here a previous post by BeBeez). ESET provides legal and strategic advisory for the investments in ESG sector. Gianpaolo Garofalo, Antonella Brambilla, Federico Vanetti, and Carsten Steinhauer will head this new service unit that will provide advisory in the fields of sustainable finance and investments, corporate governance, environment, and energetic transition.