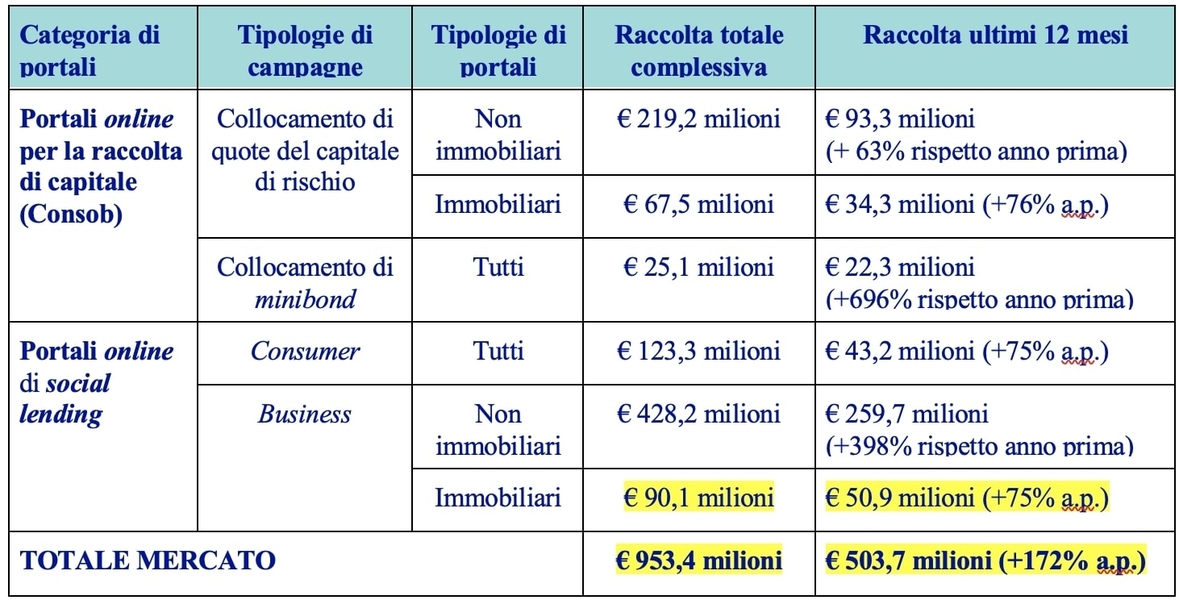 Crowd investing in Italy has raised 953.4 million euros since the start of the market, considering the equity crowdfunding and social lending platforms. Of this total, 503.7 million euros were raised in the last 12 months alone, indicating the full boom of the sector (see here a previous article by BeBeez). This is the main evidence of the latest Report on the last 12 months of Crowdinvesting in Italy which was presented yesterday morning by the Observatory on Crowdinvesting of the Politechnic University of Milan, led by Professor Giancarlo Giudici and which can be viewed at this link. The presentation of the data were followed by a round table with some of the key players in the sector, moderated by Fabio Allegreni, ceo of EdiBeez srl and founder of CrowdfundingBuzz.

Moët Hennessy, the wine and spirits producer of LVMH, and Milan-listed Campari Group signed an even joint venture for investing in wine e-commerce companies (see here a previous post by BeBeez). Campari set a newco to which it contributed its 49% stake in Tannico, an online vendor of premium wines and spirits, and sold its 50% of the newco to Moët Hennessy for a cash consideration of 25.6 million euros on the ground of an equity value of 51.2 millions for the joint venture.

Italian fintech scaleup Satispay acquired AdvisorEat, an Italian advisor for choosing restaurants, from the founder Stefano Travaglia who will keep heading the business (see here a previous post by BeBeez). AdvisorEat was born in 2017. Satispay is one of the scaleups that BeBeez Private Data monitors. Find out here how to subscribe to the Combo Version that includes the reports and the insight views of BeBeez News Premium 12 months for 110 euros per month.

B2B Gellify and Azimut Libera Impresa invested in Rebo, an Italian producer of reusable smart bottles (see here a previous post by BeBeez). Pierandrea Quarta, Francesco Abbate, Eduardo Atamoros, and Fabio Mancini founded Rebo in 2019. The company will invest the raised proceeds in expanding its international activities. Rebo adopts a blockchain-based system for auditing the saving of plastic for the manufacturing of its bottles. Gold Standard provides Rebo with further certifications that allow the firm to achieve PAAC (Plastic Avoidance and Collection Credits). Rebo recently signed a partnership with Aptar Group, a packaging company, for developing innovative closures.

Cdp Venture Capital and Generali Welion, a welfare subsidiary of Generali Italia, launched Convivit, a retirement home for self-sufficient elderly persons (see here a previous post by BeBeez). The companies own an even stake in Convivit which aims to create a network of senior living homes.

Reviva, an Italian startup that provides services for the auctions of real estate assets, attracted 300k euros from business angels (see here a previous post by BeBeez). The company previously raised 0.25 million from angel investors, Marco Franchi and Giampiero Pelle, who is now part of Reviva’s board together with Ivano De Natale and Giulio Licenza.