Search Fund Club was born, a club deal investing in European search funds launched by the same Italian team who succesfully launched 4 SPACs in Italy and one in the Netherlands 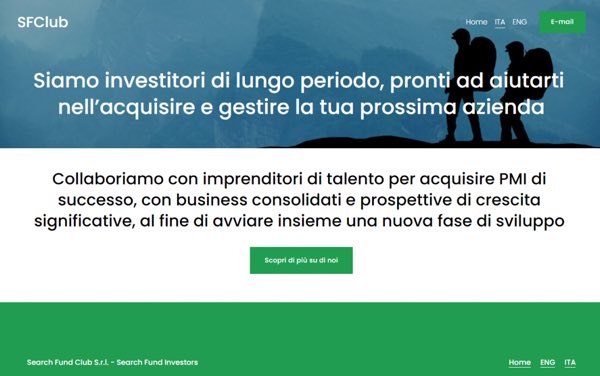 A search fund is a company that is specifically set up for the purpose of acquiring, managing and developing a single target company, in view of a possible long-term disposal, through listing or sale to third parties. The capital of the search funds is raised from private investors and, once the acquisition is made, the promoter of the search fund, known as the searcher, will also be the one who will manage and develop the company full time. In practice, in the first instance the searcher ensures a minimum capital endowment to finance the search for the right target, after which he submits the investment opportunity to investors and raises the capital necessary for the acquisition. After that, once the acquisition is made, the searcher will head the management team of the acquired company.

SFClub is promoted by Enrico Arietti and supported by the advisors Giovanni Cavallini (former president and ceo of Interpump), Attilio Arietti (founder and president of Oaklins Arietti) and Riccardo Triolo, the latter being founder of the Svinando wine ecommerce platform, whom in March 2018 was sold to Giordano Vini, a company controlled by Milan-listed Italian Wine Brands (see here a previous article by BeBeez). Mr. Triolo launched his own search fund Legacy Partners after that, of which Enrico Arietti is one of the investors and which is currently in search of the right target.

SFClub has already raised around 750k euros out of a total target of 800k euros from around fifteen Italian and foreign investors to finance scouting, due diligence and investment in various potential target search funds. This operation will be followed by another fundraising, proposed from time to time to SFClub investors, aimed at investing in acquisition capital to support the individual acquisition operations of the target companies of each of the search funds in which SFClub will have invested. The overall goal is to invest between 20 and 25 million euros in this innovative asset class, which means that each of the current investors will eventually have invested a value equal to 15-20x what they invested now in the initial phase.

While still in the start-up phase, SFClub has already made its first two investments. The first concerns the French search fund SDG Transmission, launched by Stephane Gounari, a former consultant to Mckinsey in London, with previous important experience in the aerospace industry in France. The second investment is related to the search fund SGMO, based in the Czech Republic and launched by Tomas Zbynowsky, the first searcher in the country with important experience in multinational groups and consulting firms. Furthermore, SFClub is actively following and is ready to invest in two initiatives in Italy (both launched by a couple of promoters from the world of financial advisory), two in France and one in the United Kingdom.

Enrico Arietti explained: “We invest in talented entrepreneurs, whose goal is to find and acquire a single company, to actively manage it with attention to continuity, strategic and operational improvements for long-term growth and the creation of lasting value. We are well aware of the challenges that every searcher has to face every day, at every stage of the process, from company research, to acquisition and management “. 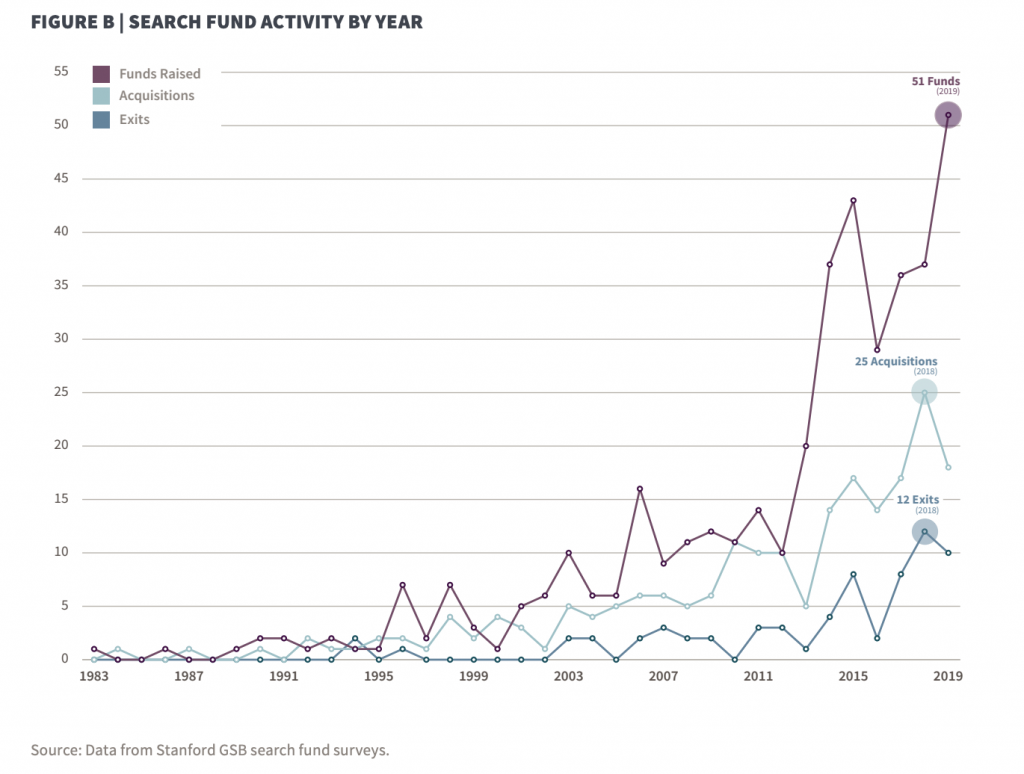 The search fund concept was coined in 1984 by H. Irving Grousbeck, a professor at Stanford University Business School. Initially, they were very popular within business schools (with Stanford at the forefront) and among students of the most prestigious US MBAs, who saw in this structure a fantastic opportunity to challenge themselves as entrepreneurs. Search funds then spread beyond academic walls, winning over experienced managers determined to become entrepreneurs.

As for the rest of the world, given the growing number of search funds outside the United States and Canada, in 2011 Stanford GSB partnered with the IESE Business School in Barcelona to monitor the international market with an identical approach to the one used by the Standford’s studies. The IESE’s study published last year showed that 132 search funds were active at the end of 2019, of which 50 (i.e. 32%) had been raised in the two-year period 2018-2019, in particular with significant growth in Europe and Latin America (at net of Mexico) with respectively 24 and 12 new funds launched. International search funds recorded an Irr of 28.7% in 2019, with the best funds which, as in the North American case, returned 23.4x the capital invested, while the median figure is only 1.1x .

In Italy, it was said, search funds are still a very new tool, so much so that they were the subject of a degree thesis which, due to the originality of the subject, was transformed into a book, presented in October 2019 in Milan, at Palazzo Mezzanotte , headquarters of Borsa Italiana, by the author, Antonio Molinari, and by some searchers, investors and professionals (see here a previous article by BeBeez).

The last Italian search fund established in chronological order was the Italian Search Fund (ISF), launched last December 2020 by Maikol Borsetti and Private Equity Partners (PEP). This is the first Italian search fund launched in collaboration with a private equity company that operates as a sponsor/accelerator of the operation(see here a previous article by BeBeez). As of now 15 investors have been identified, confidentially and strictly by invitation, in addition to Mr. Borsetti himself and PEP who will provide ISF with financial resources for the research phase of the company to be acquired and their support in terms of professionalism, contacts and relationships. The new search fund is therefore already fully operational and looking for potential targets.

We recall that in Italy, only two deals have been closed by search funds to date, both in the last months of 2019. The first was the acquisition of the Farmoderm pharmaceutical laboratories by Patria Private Capital in October 2019 (see here a previous article by BeBeez). Patria Private Capital was promoted by Guido Fileppo, convincing a group of private investors to participate in his project, including well-known names in finance such as Paolo Braghieri (former ceo of Interbanca) and RedSeed, the venture capital investment holding company founded by Elisa Schembari and Roberto Zanco, and financed by a pool of private investors including Roberto Italia (among the promoters of the Spac Space series and the new club deal Space Capital Club, see here a previous article by BeBeez) and Federico Leproux, managing director by Teamsystem. The second acquisition concluded by a search fund was the one of Etichettificio LGL, a company active in the production and marketing of self-adhesive labels, by Maestrale Capital srl in November 2019 (see here a previous article by BeBeez). In turn, last December, Etichettificio LGL made an acquisition, buying the competitor Prisma (see here a previous article by BeBeez). Maestrale Capital srl was launched in February 2017 by Vito Giurazza, who was executive director at JP Morgan in the m&a department and worked as a consultant for Bain & Company. Betting on the fund was a group of private investors including Paolo Ainio (Banzai), Francesco Rossi Ferrini (JP Morgan), Sandro Mina (Relay Investments) and the German search fund investor Jürgen Rillin.

Then there are other Italian search funds still looking for the right target. In March 2019 Toby Sacchi Clarence-Smith launched CS Investimenti srl, supported by a group of 16 investors, mainly from international family offices and leading US, Spanish and German private equity funds (see here a previous article by BeBeez). Mr. Sacchi Clearance-Smith has a background as co-founder of Petsy.mx, one of Mexico’s leading ecommerce platforms for pet products. The startup, founded in 2013, has over time been financed by leading Mexican venture capital funds such as ALLVP, Mountain Nazca, Mexico Ventures, Dila Capital, Capital Invent, as well as by business angels and other private investors. In July 2018 Petsy.mx was acquired by the market leader Maskota.

Another search fund still in search is Tre Cime Capital Ltd. Initially launched in Spain, Tre Cime then refocused in Italy in 2016. It was launched by Tommaso Romanelli, a manager who trained in Silicon Valley, working in the renewable sector (he led Makani Power, later acquired by Google X). It was financed by investors such as Daniele Benatoff, hedge fund manager and former Goldman Sachs; Paolo Guida, manager of the start-up sector; as well as American entrepreneurs such as Bill Egan, founder of the multinational Alta Communications and one of the best-known venture capitalists in the US. Finally, as mentioned, there are Legacy Partners by Riccardo Triolo; and also Augusta Capital Partners, launched by Pietro Paolo Paci, a professional and company consultant. Some time ago there was also Sprint Capital, promoted by Manuel Piccinato, but today there are no news of it.