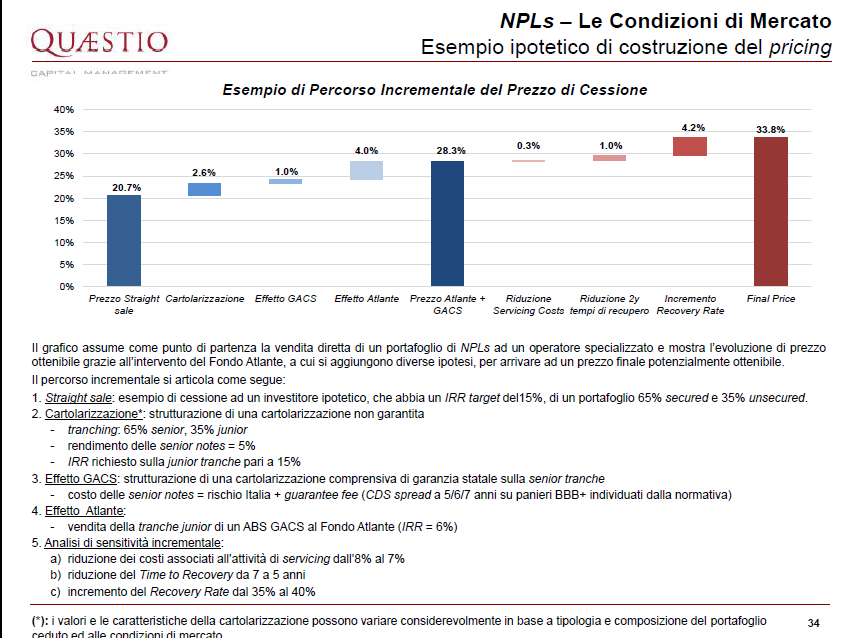 Quaestio Capital Management sgr’s Atlante fund will buy  the 1.6 billion euros mezzanine tranche of the projected Banca Monte dei Paschi di Siena’s 9.2 billion euros Npl securitization which was announced last July 29th. The fund will be as well granted warrants to buy a 7% stake in Mps’s capital when a 5 billion euros capital increase will be launched by the end of the year (see here the press release).

The news is part of a more complex plan announced by the bank last Friday which actually includes a strengthening in coverage of non-performing exposures (i.e. bad loans, unlikely to pays and past due loans), the de-recognition of the bad loan portfolio (gross 27.7 billion euros or net 10.2 billions on March 31st 2016) through the securitization structure and a 5 billion euros capital increase.

The completion of the transaction is subject, among others, to approval by the relevant supervisory and regulatory authorities. The Bank will submit to the ECB, at the earliest possible date, a comprehensive capital plan including the Rights Issue aimed at obtaining a more than adequate capital position. In this regard, the ECB has confirmed that Mps, subject to all parts of the transaction being successfully completed, will be able to exclude/limit the impact stemming from the disposal of all bad loans as part of the Transaction, for the calculation of loss given default (LGD) estimates.

Banca Mps is supported by JP Morgan and Mediobanca as financial advisors, as global coordinator of the capital increase and as arranger of the bad loan portfolio securitization. Banca Mps is also supported by Lazard as independent financial advisor and by BonelliErede law firm, while professors Piergaetano Marchetti and Francesco Carbonetti are advising the bank, respectively, on company and supervision legal aspects.

As for the timeline, Mps’s ceo Fabrizio Viola told in a conference call last Friday that “the business plan will be presented next September before the capital increase. Next October or November the shareholders’ meeting will vote the whole transaction and by end of the year we will close the capital increase and the bad loan derecognition”. The Here are the details of the proposed transation.