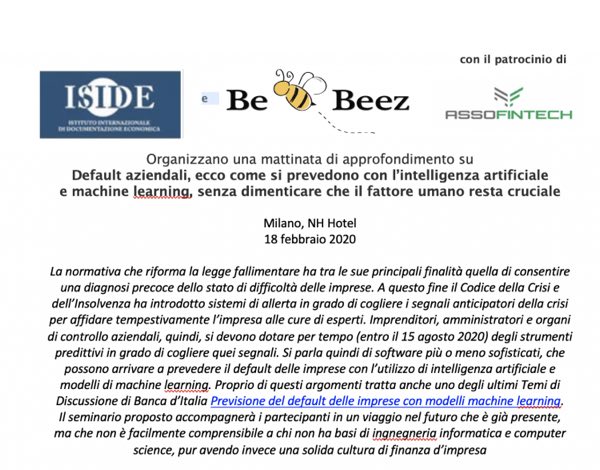 The NH Hotel in Milan will host on 18 February 2020, Tuesday, an event about “Corporate defaults, that’s how they are expected
with artificial intelligence and machine learning, without forgetting that the human factor remains crucial”. The event is promoted by Iside and BeBeez with blessing by Assofintech, the Association of fintech and insurtech companies in Italy (see here a previous post by BeBeez). Stefania Peveraro, the Chief Editor of BeBeez will hold the panel opening speech at 10 AM. Further speakers of the roundtable are Valeria Lazzaroli, chief risk officer of ARISK; Bruno Lorenzelli, founder and ceo of TXC Markets; Fabrizio Milano D’Aragona, founder and ceo of Finscience (part of Datrix); Paolo Rinaldi, a senior partner of Studio Rinaldi; Alessandro Fischetti, ceo and cofounder of Leanus. The subscribers of BeBeez News Premium get a 10% discount for the event fee, find out here how to subscribe to BeBeez News Premium for just 20 euros per monthand read the BeBeez Reports and Insight Views

Italian credit servicer Europa Factor issued two Milan-listed minibonds of 2.5 million euros each (see here a previous post by BeBeez). One of them pays a 4.9% coupon and is due to mature in December 2024, the other pays a 5.15% coupon with maturity in December 2026. Zenit and Iccrea Bancaimpresa subscribed the liabilities. The company will invest such proceeds in its organic development. The Bottone family founded the business in 2003. Pierluca Bottone (95.2%) and Federica Bottone (4.8%) own Europa Factor which has a turnover of 22.8 million, an ebitda of 1.8 million, and a net financial debt of 11.7 million.
Cassa di Risparmio di Volterra (CRV) sold a portfolio single name bad loans with a face value of 64 million euros (see here a previous post by BeBeez). CRV carried on such transaction through Single Name Italy, the platform of Banca Akros for the sale of distressed credits. Giovanni Manghetti and Stefano Picciolini are the chairman and coo of CRV, of which Fondazione Volterra has 75%, Credit Agricole 20%, and Fondazione San Miniato 5%.

Prelios Innovation, the fintech unito of Gruppo Prelios, signed a three-years partnership with Centrale Credit Solutions, part of Cassa Centrale Banca – Credito Cooperativo Italiano (See here a previous post by BeBeez). The 80 banks that are part of Credito Cooperativo will handle their NPLs through the BlinkS, a digital marketplace that Prelios launched in December 2018. Cassa Centrale aims to reduce its NPL ratio to below 7% of its credits by 2021. Gabriella Breno and Francesco Uggenti are the ceo and the Head of Business Development of Prelios Innovation, while Fabrizio Berti is the ceo of Centrale Credit Solutions. Cassa Centrale Banca – Credito Cooperativo Italiano has assets of 6.7 billion euros and a CET1 of 19.7%.

Carlyle wrote to the distressed Maccaferri Group a letter reminding it that the bond settlement provides for the enforcement of the guarantees to be activated automatically (see here a previous post by BeBeez). However, the US fund would accept a write-off of Officine Maccaferri‘s existing debt (excluding banking debt) and would supply fresh resources for the company and Seci, the controlling shareholder of the Maccaferri Group. In December 2019, Carlyle acquired the 190 million euros Milan-listed bond that Officine Maccaferri issued. The liability pays a 5.75% coupon and is due to mature in 2021. The company issued this bond for 200 million in June 2014 and on January 10, Friday, its price was of 87 eurocents. Maccaferri has to make a decision by 4 February, Tuesday, the date that the Bologna Court set for a hearing for discussing the company’s relaunch plans of Seci and three other firms. Seci reportedly attracted the interest of Oxy Capital and Hps, which tabled to Rothschild, the company’s advisor, a 200 million binding offer for whole Maccaferri Group. Fortress Investment Group, an American company that belongs to Softbank, also made a bid for the Maccaferri Group.