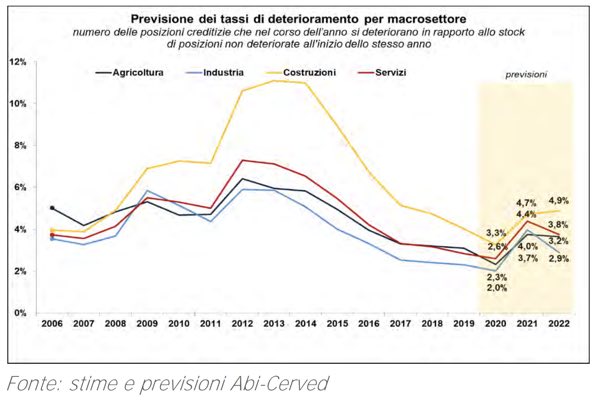 The expected increase in the stock of non-performing loans on the books of Italian banks due to the consequences of the pandemic at the end of 2020 had not yet been seen, because the extraordinary measures in support of businesses adopted by the Government and at the initiative of the banks during the pandemic have so far prevented that the blocking of economic activities due to the health emergency would translate into a surge in corporate defaults. But it is only a matter of time. This was said in the latest Abi-Cerved Outlook on impaired loans of Italian companies published Friday 5 March (see here a previous post by BeBeez). But it the report is also reassuring: although the deterioration rates of non-financial companies (or the share of performing loans that have passed to the status of impaired) will worsen in 2021 to 4.3% from 2.5% in September 2020, in 2022 it will fall back to 3.7%, a level higher than that at the end of 2019 (2.9%), but much lower than that reached at the peak of the 2012 crisis (7.5%).

Italy is negotiating with the European Commission to extend until May 2022 the GACS (Guarantee Fund on the Securitisation of Non-performing loans) (see here a previous post by BeBeez). The negotiations for extending the GACS don’t involve the Utps. The Italian authorities believe that rating agencies are unable to adequately assess the recovery capacity of utp managers.

Unicredit has just sent investors teasers for the sale of two portfolios of non-performing loans, each worth one billion euros, MF Milano Finanza wrote, specifying that the first portfolio would be mixed Npl and UTP, while the second would be composed only of unsecured bad loans (see here a previous article by BeBeez). We remind you that the sale of the Dawn portfolio, a one billion euro portfolio of Utp small ticket is also esxpected and that under consideration, in the case of a merger between MPS and Unicredit, there would be the sale of 14 billion euros of NPEs by Unicredit to AMCO, with the latter that could also purchase another package of impaired loans from Mps, after the 8.1 billion already bought on 1 December. Unicredit was very active on the de-risking front last year. At the end of the year, the stock of NPEs of the group had in fact fallen to around 21.2 billion euros from 25.3 billions at the end of 2019, with a gross NPE ratio down to 4.5% from 5% and a net NPE in slight increase to 1.9% from 1.8% at the end of 2019. In particular non-core impaired loans fell to 3.7 billion, below the target set at 4.3 billion by the industrial plan for 2020 and therefore accelerating to reach the target of zero non-core NPLs at the end of 2021 (for a focus on the credit quality situation of the top seven Italian banks at the end of 2020, see here the BeBeez Insight View of last March 1st (available for BeBeez News Premium subscribers).

IBL Banca, an Italian corporate and consumer lender, closed its first deal of senior financing for a securitization of distressed credits amounting to 7 million euros (see here a previous post by BeBeez). IBL subscribed the senior tranche of securitization of secured Npls and Utps with a partly paid structure and a face value of 35 million. IBL (5%), Ben Oldman European Asset Backed Lending (90%) and an undisclosed market participant (5%) subscribed the junior tranche.

The good news is that in 2020 private debt transactions in Italy conducted by specialized funds increased by 62% (410 deals spread over 320 companies). The bad news is that the fundraising dropped by 24%, amounting to 293 million euros compared to 385 millions in 2019 (see here a previous post by BeBeez). As for the type of investors, 64% of the capital raised came from insurance companies, 24% from institutional funds of funds and 10% from banks. Furthermore, 90% of the capital raised came from Italy. Investments are also down (-9%): in 2020 1,197 million euros were invested, compared to 1,322 million in 2019. 50% of the amount was invested by international entities, which nevertheless achieved 10% of the number of transactions (excluding the activity of lending platforms), a clear sign that investors from overseas have focused on larger transactions. This is what emerges from the data presentation put forward by AIFI (Italian Association of Private Equity Venture Capital and Private Debt) and Deloitte. It should be noted that the BeBeez Report on Private Debt in 2020 (available for BeBeez News Premium subscribers), which also considers direct lending, securitisations and the purchase of loans on the secondary market, has in fact estimated a market equal to 13.1 billion euros for 2020, a sharp increase from just under 12.2 billion euros in 2019 and from 10.8 billion in 2018,

Italian fintech scaleup Credimi made a securitization of SMEs loans amounting to 170 million euros that Deutsche Bank (DB – 150 million) and Banca Sella (20 million) subscribed (see here a previous post by BeBeez). Further to the asset-backed notes, DB subscribed warrants that will allow getting 2% of Credimi. In 2020, Credimi issued 660 million euros (+40%) through cash invoice.

Twinset, the fashion firm that belongs to Carlyle, made a review of its covenants with the investors of the 170 million euros Vienna listed bond issued in March 2018 and due to mature on 5 March 2025 (see here a previous post by BeBeez). The company invested the proceeds of such issuance in repaying a 150 million Luxembourg-listed bond issued in 2014 with a coupon of 590 basis points over the Euribor rate, for partially repaying a shareholders loan and paying the fees of the whole transaction. In 2018, Twinset also received from Unicredit a super senior revolving financing facility with a tenure of 6 years worth 30 million. Alessandro Varisco is the ceo of Twinset. Between 2012 and 2017, Simona Barbieri and her husband Tiziano Sgarbi sold to Carlyle their holdings in the company. Twinset has sales of 227.3 million, an ebitda of 36.1 million and net cash of 40 million.

On 5 March, Friday, Alessi Domenico, an Italian jewellery company, placed a short term minibond of 0.3 million euros through Fundera, a crowdfunding platform that belongs to Gruppo Frigiolini & Partners Merchant (see here a previous post by BeBeez). The bond is due to mature on 5 March 2022, pays a 3.8% coupon and has the warranty of Mediocredito Centrale (MCC) for 0.2 million. For 2020-2021, Alessi aims to issue short term revolving minibonds of 3 million with the support of Frigiolini & Partners. The company will invest the raised proceeds in its commercial and financial structure. In September 2020, Alessi issued a Milan-listed 0.5 million bond due to mature in May 2021 and with a 4.2% coupon. Alessi Domenico’s controlling shareholders are Filippo Aldo (ceo), Alice Tobia, and Paolo Alessi (chairman). The company has sales of 83.57 million with an ebitda of 1.81 million. Sign up here for BeBeez Newsletter about Private Debt and receive all the last 24 hours updates for the sector.

Frigiolini & Partners Merchant (F&P) launched Pluribond Gruppo CR Asti and Pluribond Sviluppo Artigiano (PSA) (see here a previous post by BeBeez).  CR Asti is the originator of Pluribond, while Fundera, the crowdfunding portal of F&P, will act as placement agent. Pluribond will involve SMEs based in Piedmont, Lombardy and Veneto that may issue bonds of 0.3-2 million euros that will receive a 90% warranty from MCC or Sace. The companies that are part of Confidi Veneto Sviluppo Artigiano can apply for the facilities of PSA and issue bonds of 0.3 – 0.8 million. Sign up here for BeBeez Newsletter about Private Debt and receive all the last 24 hours updates for the sector.

Emmeffeci, an Italian thermohydraulics company, issued a callable (with a reward for the subscribers) short term minibond worth 0.15 million euros with a gross coupon of 4.2% and due to mature on 23 December 2021 (see here a previous post by BeBeez). Rete Fidi Liguria is the anchor investor. Ascomfidi Nord-Ovest subscribed part of the minibond placed on Fundera, part of Gruppo F&P Merchant. Fondo di Garanzia per le Pmi (80%) and Ascomfidi Nord-Ovest (10%) provided the warranty for the liability. Sign up here for BeBeez Newsletter about Private Debt and receive all the last 24 hours updates for the sector.