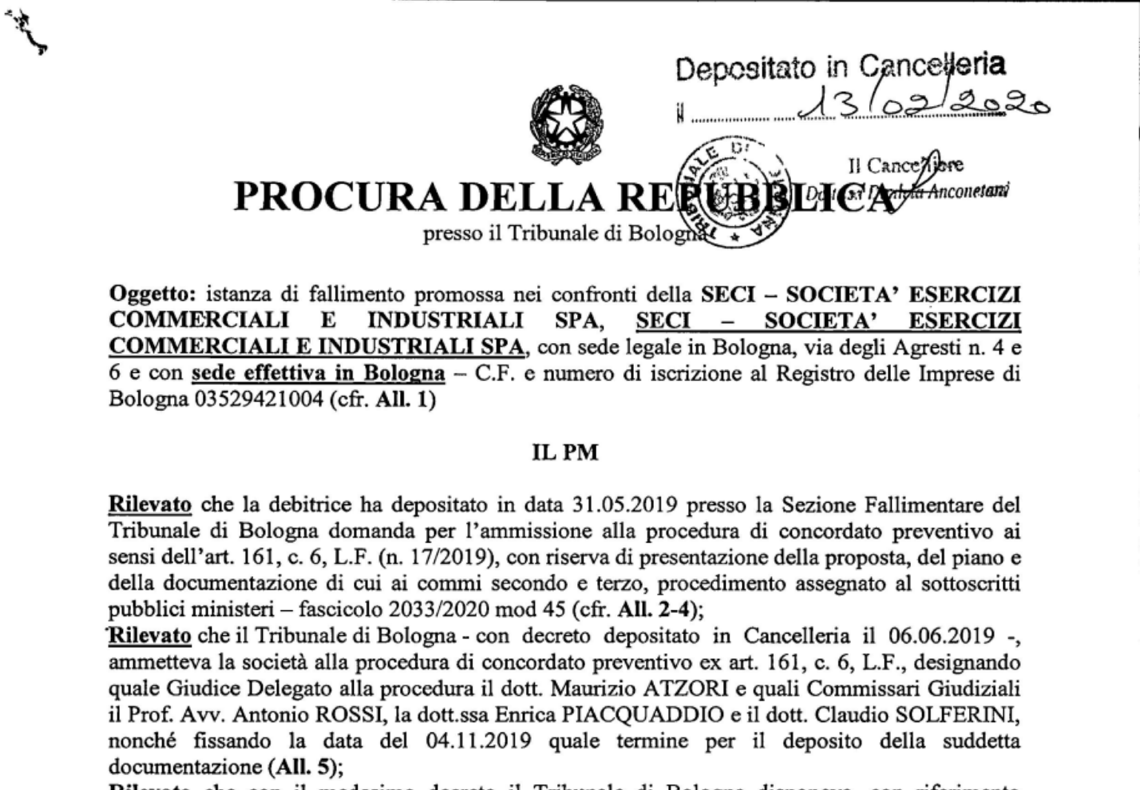 On 13 February the Public Prosecutor’s Office filed a bankruptcy petition under Article 162 of the Italian Bankruptcy Law for Seci, the parent company through which the Maccaferri family controls the homonymous Group (see the complete document of the court here). The Court accepted the request and set a hearing for April 3rd to hear the company and the creditors recurring on the assessment of the conditions for filing for bankruptcy.
The Court of Bologna had previously set a date for a hearing about on a relaunch plan as part of an ongoing arrangement, which involves Seci, together with subsidiary Samp. That date had been moved from 4 February to mid month (see here a previous post by BeBeez). But things have then taken a very different turn.
In fact, the Prosecutor believes that the company is in a “real irreversible state of insolvency“, with a negative equity worth of over 65 million euros as of 31 December 2018, worsening at about -120 million euros at 30th September 2019. 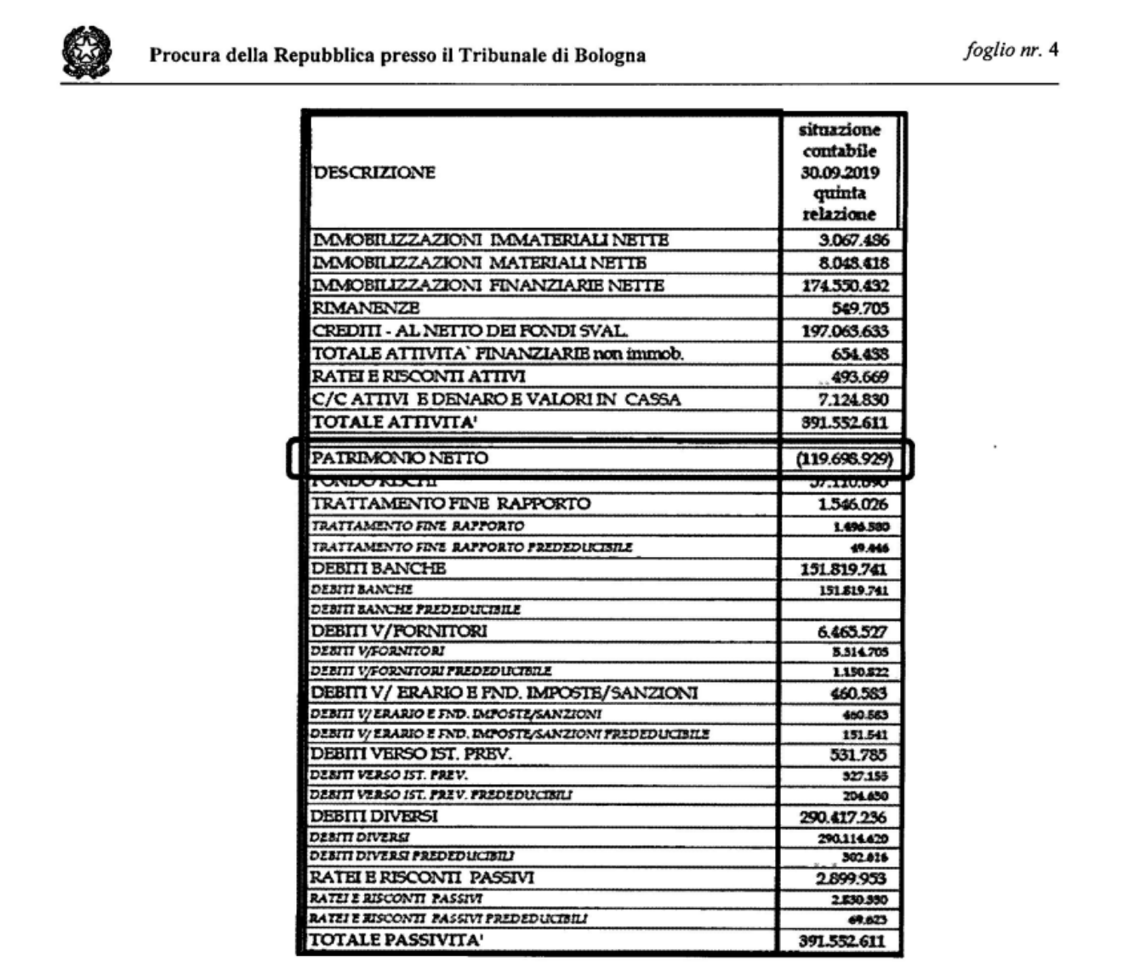 The Prosecutor considers it even more serious, if you consider that out of the 391.5 million euros of assets at the same date of 30th Sept 2019 there were 197 million euros of credits almost exclusively due to subsidiaries and associates and that many of them arose following the enforcement of guarantees previously lent by Seci  towards third party lenders. These are therefore credits that cannot be realized, given the crisis facing the Maccaferri Group.
Not only. Net financial assets also included Seci Lux, to which Seci spa had conferred 46.1% of Manifatture Sigaro Toscano in January 2019 at a value of approximately 136 million. The shares of Manifatture Sigaro Toscano and Seci Lux are encumbered by a pledge in favor of the underwriters of the 90 million euro bond issued by Seci spa between January and March 2019, on whose enforcement judgments of the Milan and Luxembourg courts are pending. That bond was subscribed by the minority shareholders of MST, that are Mcg holding of the Montezemolo family, Compresa of Aurelio Regina, Antelao of Piero Gnudi and Aragorn Value Leadership of Francesco Valli (see Il Resto del Carlino). Sources told BeBeez that Manifatture Sigaro Toscano expects to be able to honor the service of the bond and that after 4 years Seci will evaluate whether to sell it or refinance the bond. Maccaferri’s relaunch plan hinges on Manifatture Sigaro Toscano, considering that the latter is healthy and able to guarantee the liquidity necessary for the plan.
An eventual bankruptcy of Seci would also drag the companies headed by the holding company into the abyss. The bankruptcy petition is a due act of the Public Prosecutor’s Office, considering that Seci has not respected the deadline of January 2020 for the presentation of the plan. The bankruptcy process will cease when the company presents the recovery plan. According to what BeBeez learned from the company, Sadam, Seci, Seci Energia and Ewa’s plans are expected to be presented later this week.
The Maccaferri Group had opened the arrangement with reserve for Seci holding at the beginning of June 2019; for Seci Energia, sub-holding of the energy sector; and for Enerray, an energy company. Subsequently, the construction company Sapaba, the sugar producer Sadam and the factoring company Felsinea Factor, also requested the agreement, for a total of 400 employees involved out of the 4,500 total of the Maccaferri Group (see  here a previous article by BeBeez) and Samp, mechanical engineering company (see here a previous article by BeBeez). The plan was presented to the Court for Felsinea Factor, which will be liquidated, and for Enerray, of which the maintenance company branch has already been leased to Lt Holding (also photovoltaic sector), which is already bound to the purchase. Sapaba, Exergy (sold in October 2019 to the Chinese of NanjingTica Thermal Solution, see here a previous article by BeBeez) and Sebigas continue their path of arrangement.
Last week Officine Maccaferri reached a so-called forbearance agreement (i.e. containing concession measures) with the holders of the 190 million euro bond listed on the ExtraMot Pro, with a 5.75% coupon, expiring in 20121 and acquired by Carlyle and its co-investors last December (see the press release here and here a previous article by BeBeez). At the end of January 2020, Carlyle had written a letter to the Maccaferri Group stating that the bond regulation provides for the enforcement of guarantees to be activated automatically (see here the Offering Memorandum, pages 134-135 and here a previous article by BeBeez) . To avoid the acceleration and therefore the signing of an agreement, the US fund had offered the write-off of Officine Maccaferri’s existing debt (excluding bank debt) and, within a larger plan, new finance for the same Officine Maccaferri and for Seci. Evidently a general agreement in this sense has been found, given that the note from Officine Maccaferri states that “the company is currently finalizing a revised business plan which will include, among other things, new financial or liquidity instruments and consequently will start to a process of soliciting consent and summoning a bondholders’ meeting is brief in order, among other things, to modify some terms of the Indenture to allow the company to take certain measures to implement the new loan through financial or liquidity instruments ” .
The possible saviors of Maccaferri, in addition to Carlyle, could be Oxy Capital and Hps (see here a previous article by BeBeez), Fortress Investment Group (see here a previous article by BeBeez) and Quattro R (see here a previous article by BeBeez), which had presented bids in 2019. According to Il Resto del Carlino, Bonfiglioli Riduttori also entered the game last week, who would have submitted a bid for Sampingranaggi, one of the six divisions of Samp agreed in autumn 2019.