After three years of SC Lowy care, Solution Bank (previously named Credito di Romagna) is a completely different bank, grinds profits and also finances small, but even more often medium-sized companies, participating in syndicates which before it would have not had access. And that’s not all, because, thanks to the experience of the parent company, SC Lowy, in fact, the bank also finances both short and medium-long term companies that are in what are defined as “special situations”, as they are living a moment of liquidity crisis or because have just emerged from an insolvency procedure and traditional banks still do not trust to support them. This is a market niche that is still very little covered in Italy.

The recovery story of the bank has been told to BeBeez by the general manager, Frank Fogiel, and Michel Lowy himself, the former Belgian investment banker who, together with Soo Cheon Lee, his colleague for 15 years in Deutsche Bank and Cargill, founded the Hong Kong-based banking group that bears his name and has a solid track record of managing credit funds and investing in high yield and distressed debt.

We recall that in April 2018 SC Lowy announced the purchase of 90% of the then Credito di Romagna by subscribing a capital increase of 50 million euros (see here a previous article by BeBeez). The bank, founded in 2003 and based in Forlì, was going through a difficult phase. In 2010 it had in fact been commissioned by the Bank of Italy which had imposed a controlled administration lasting 14 months as part of an investigation involving the San Marino-based  Istituto bancario Sanmarinese. In July 2016, Bank of Italy then imposed the removal procedure, a move adopted for the first time in Italy with the effect of alienating management. And this is because the Supervisory Authority asked for discontinuity with respect to 2010. Meanwhile, between 2014 and 2017, the bank had recorded overall losses of more than one third of the capital. And in those conditions it would no longer have had enough assets to operate. SC Lowy’s intervention therefore avoided liquidation.

“In Italy there are many small, under-capitalized banks that do not have the experience to be able to lend money to companies without taking too many risks. We have that experience and we wanted to export it here, in order to seize what was and still is an interesting market opportunity for us, because lending to medium-sized enterprises is still an uncovered segment in Italy. To do this we needed a platform in Italy and we found it in Credito di Romagna”, Michel Lowy explained to BeBeez and added:  Since we bought the bank, we have invested a lot, especially in people, by changing the management team and investing above all to build a young and top-level team focused on investment banking and credit risk analysis. At the same time we managed the non-performing loans that were on the bank’s books, in most cases we were able to close the positions with agreements with the debtors and bringing the companies back to performance and in a few other cases we sold the credits instead. In the meantime, we have begun to provide new loans to new client companies, in many cases also in Southern Italy, thanks to the new skills of the bank’s team”. In all this, added Lowy, “Bank of Italy has supported us, it sees our project with great favor”.

To do all this, “SC Lowy has invested around 100 million euros in the bank over three years. In particular, recently SC Lowy converted the 8.6 million euros of net profit 2020 to capital and already paid another 10 million euros into a future capital increase account”, Michel Lowy explained. And in fact, as stated in the FY 2020 Financial Statements, “since its entry, therefore, SC Lowy has injected assets for 94.4 million euros”. And that’s not all, because, according to the Financial Statements, the board of directors has approved a capital increase of approximately 37 million euros reserved to shareholders, which will take place by converting most of the 44.4 million euros of reserves to capital. Moreover, on the basis of the new Business Plan 2021-2024 and “given the forecast of possible further capital injections over the plan period, the willingness of the controlling shareholder to support its development was confirmed, in order to support the planned investments and at the same time maintain adequate capital ratios, where this is necessary”.

Today Solution Bank is in a strong position. Frank Fogiel explained to BeBeez: “In June 2021, the bank had assets of around 930 million euros and a CET1 Ratio of over 14%, but at the end of 2017 (see here Financial Statements for FY 2017, FY 2018 and FY 2019, note of the editor), the year before our entry, the assets were only about 650 million euros and the CET1 ratio was only 1.4%. This is why we immediately recapitalized the bank. We closed 2020 with 8.6 million euros of net profit, after the losses accumulated in previous years. I remember that the bank had lost 30 millions in 2017. And last year we returned to being profitable with a ROE of 15.3%. Net revenues in 2020 were 23.7 millions (reclassified data) and by the end of 2021 we expect them to rise to 30 millions, a sharp increase from around 18 millions in 2017″. All this in the face of almost 750 million euros of deposits at the end of June 2021. In this latter regard, Fogiel said again, “the raising takes place both from traditional customers and from new foreign online customers, thanks to an agreement that we have signed with the fintech company Raisin“. 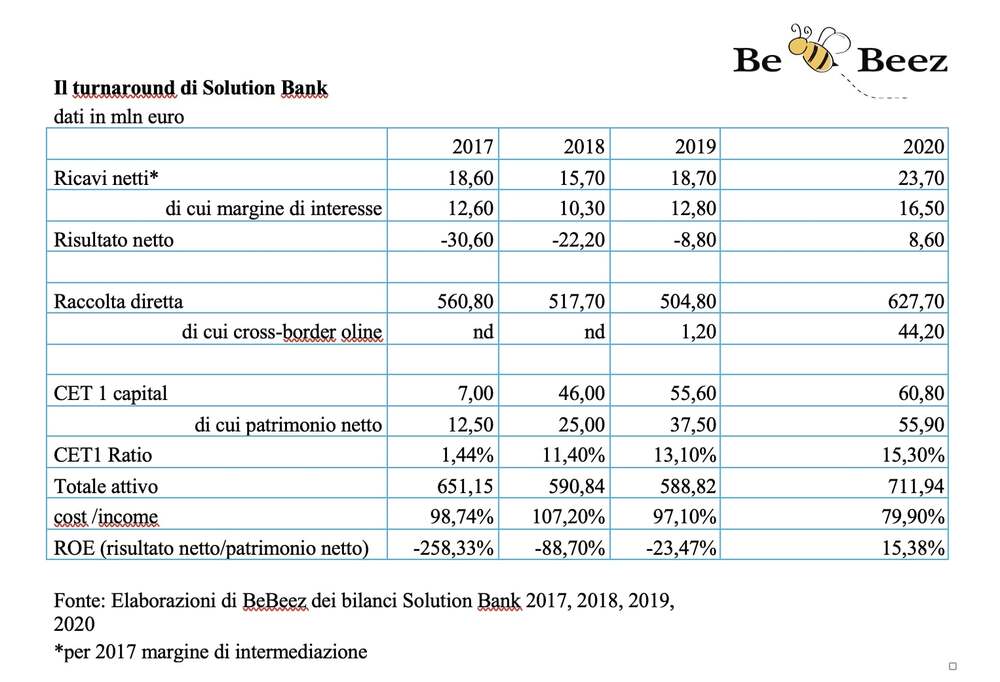 And speaking of fintech, Michel Lowy is keen to say that “Solution Bank has also invested a lot in technology and could be defined as a challenger bank, but although technology is a tool that we use in an important way, it is not our main characteristic. What we are good at are our credit analysis skills”.

And in fact, under the new ownership, Solution Bank now continues to be a commercial bank in the area at the service of businesses and households, but, it was said, in parallel it has expanded its activity to the market of syndicated loans and illiquid assets, with particular attention to sub-performing loans. All that tanking into account the possibility to work alongside SC Lowy’s global distressed credit fund. We recall that SC Lowy before the outbreak of the pandemic had also launched the fundriasing of a vehicle dedicated to Italy with a target of 200 million euros (see here a previous article by BeBeez), but due to the pandemic it blocked the marketing and “for the moment we prefer not to continue and invest instead opportunistically with our global fund”, Michel Lowy said.

This was done in the past, for example, by acquiring from Mps, Mps Capital Services and Bnl Bnp Paribas the credits of Acaya, a company controlled by Aligros of the Montinari family and owner of the tourist-hotel complex Acaya Golf Resort & spa in Salento in Apulia. SC Lowy signed an agreement with the company at the beginning of 2019 to support the relaunch plan which provided for the sale of the resort to third parties, in order to allow Acaya to fully pay off its debt and at the same time undertake new real estate development operations in the ‘business continuity perspective (see here a previous article by BeBeez).

Among the bank’s latest operations, on the other hand, we recall for example that of last July on Officine Maccaferri. Solution Bank has in fact financed the company together with Banca Private Leasing for 20 million euros (10 million each, see here a previous article by BeBeez). The new finance, already authorized by the Court of Bologna, will allow Officine Maccaferri to arrive calmly at the approval of the arrangement, after the same Court had repeatedly rejected the proposals for new finance by Carlyle and its co-investors ((see here a previous article by BeBeez), which last December had won the auction for the company that belonged to the SECI of the Maccaferri family, in turn declared bankrupt in recent weeks (see here a previous article by BeBeez).

Solution Bank then last February participated in a pool with other banks in two debt restructuring agreements pursuant to art. 182-bis of Italy’s Bankruptcy Law with Trevi SE and its subsidiary Sofitre srl (see here a previous article by BeBeez). Trevi SE was for a long time the reference shareholder of Trevi Finanziaria Industriale, the underground engineering group that got into difficulty in autumn 2017, then returned to balance thanks to a capital increase last year subscribed by the shareholders FSI Investimenti-Cdp Equity and Polaris Capital Management, contextual to a debt restructuring agreement pursuant to art. 182-bis (see here a previous article by BeBeez).

And again in February, the former Credito di Romagna pooled financing with Illimity Bank for a total of 12 million euros Frette, the Italian textile brand specialized in luxury household linen Frette, controlled by Change Capital Partners and held for a minority by JH Partners (see here a previous article by BeBeez). Frette is a healthy company today, despite the current market difficulties, but it has had difficult years. We recall that JH Partners had initially invested in Frette in December 2004, renting the business unit when the company was in crisis due to the bankruptcy of the parent company Fin.Part. Subsequently, in December 2005, JH Partners had taken over the Frette business unit and its international holdings and in October 2006 it had finally exercised the purchase option of the Frette brand. However, things certainly did not go well in the years following the 2008 international financial crisis. When control of Frette passed to Change Capital Partners in July 2014, the fund undertook a profound restructuring of the business, with the company continuing to make losses until 2017.

As for the future, concluded Michel Lowy, “now the bank has everything it needs to grow by itself in an important way: we have the right team and we have the deposits. Of course, if we decide to enter a sector in which the bank is not present today, such as leasing, then we could think of an acquisition. But for the moment it is not a hypothesis under study “.