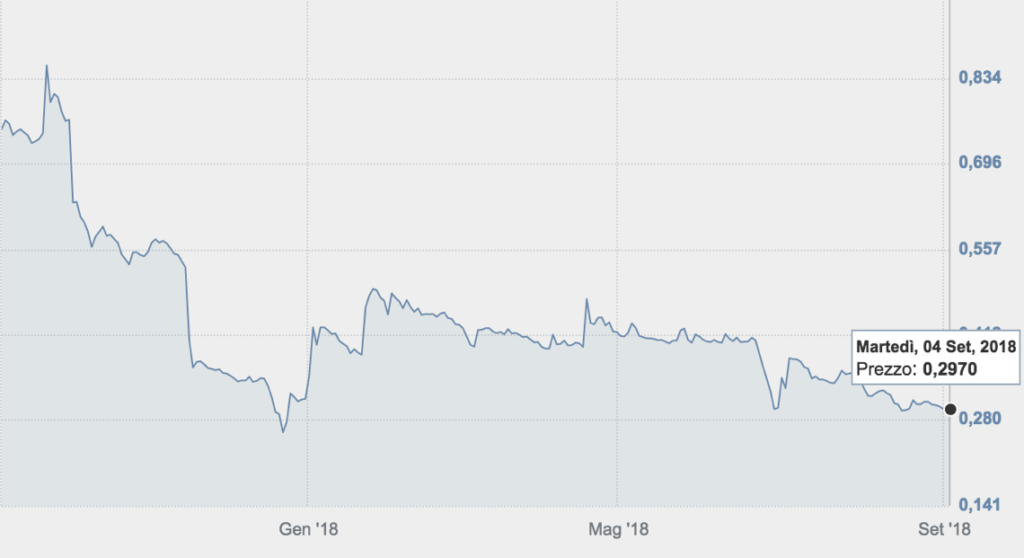 Trevi Finanziaria Industriale spa stock dropped below the minimum prices of last June in the last few days closing at  0.297 euros yesterday on the Italian Stock Exchange for a 48.8 million euros market cap. While on ‘ExtraMot Pro the 50 million euros bond is still quoting 79 after having dropped more than 5 figures on Aug 10 when the company announced talks with Bain Capital Credit were going to take more time than expected.

Market is then rather cautions about the future of Trevi, a group active in subsoil engineering and in the drilling sector, which is controlled by the Trevisani family with a 32.73% stake and by Cdp Equity (16.85%).

By Sep 14 Trevi will say yes or no to Bain Capital Credit binding offer as last Aug 10 the group accepted to prolongue exclusive talks with the credit fund till that date (see here the press release).

Bain Capital Credit has been in talks with Trevifin since last Spring in order to subscribe a capital increase that might rescue the group as far as Trevifin signs a debt restructuring agreement with its lending banks (see here a previous post by BeBeez). Bain entered in exclusive talks at the end of July (see here the press release). Private equity funds have been studying Trevi’s dossier since last November when the group announced that it was taking action in order to strenghten its capital structure due to a too big debt burden (see here a previous post by BeBeez).

In the meantime Trevi’s lending banks are signing the standstill agreement that was discussed last July. They have time till next Sep 15 and lenders representing at least 93% of the financial debt are due to sign the agreement for this to be convalidated.

An agreement with banks is the first necessary step for Bain Capital Credit’s offer to be confirmed. Actually the fund has offered to issue a super senior loan to  Trevi spa and  Soilmec spa for a maximum of 100 million euros (so less than the 150 million euros previously offered, see here the press release). The loan would come together with a debt to equity swap in a measure to be decided on the basis of the effective needs that will be shown and all that would be done in the framework of a restructuring debt agreement  signed by the Milan Court on the basis of art. 182-bis of the Italian Bankrupcty Law (see here the press release).

Meanwhile last July 30 Trevi’s shareholders meeting approved a 400 million euros capital increase to be subscribed in cash for a maximum of 150 million euros and with debt to equity conversion for the rest (see here the press release).