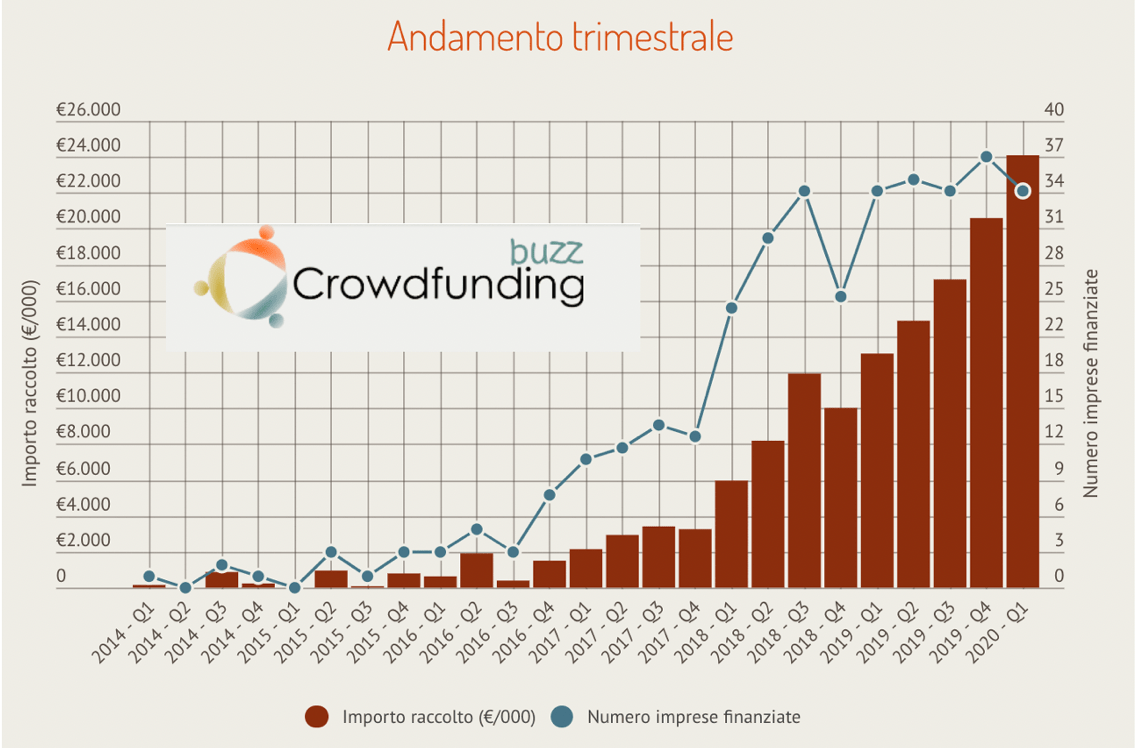 Italian equity crowdfunding stroke a boom in fundraising in the first quarter of 2020, which closed with 24.07 million euros in funding, after 65 millions in the whole 2019 (see here a previous article by BeBeez) and despite the coronavirus. The sector data were released yesterday by CrowdfundingBuzz, an online magazine dedicated to crowdfunding published by Edibeez, as well as BeBeez.

There were 34 companies financed, only 3 less than the record of the last quarter, for an average of 711k euros in average funding, much higher than that of last year (469k euros). There were more than 3,500 equity crowdfunding investors, or 105 on average per campaign, with an average investment almost double that of 2019: 6,700 versus 3,600 euros.

It is true, however, that the figure for the month of March, the one most impacted by the measures to contain the contagion from Covid-19, marked a fundraising of 10.44 million euros, which is almost entirely attributable to the record campaign of the investment vehicle Fin -novia, made on BacktoWork, the platform partially owned by Neva Finventures, the corporate venture capital of Intesa Sanpaolo. Fin-novia actually raised over 7.6 million euros to invest in e-Novia, in turn an investment vehicle dedicated to the creation of startups (see here a previous article by BeBeez). The success of the campaign which ended at the beginning of the month was due to the support of Intesa Sanpaolo Private Banking, which, through its network, decided to propose the operation to its customers. The same type of approach that also led the scale-up of the D-Orbit new space sector to raise 2.6 million euros on ClubDealOnline: in that case, in fact, the fundraising was carried out in collaboration with the  private banking structures of Banca Sella and Sparkasse (see here a previous article by BeBeez). The CludBealOnline data, however, do not enter into the CrowdFundingBuzz figure, because it is a platform that is not really aimed at the crowd, but rather at the so-called HNWI (high net worth individual).

Alessandro Lerro a partner of Avvocati.Net, legal advisor of both campaigns, as well as chairman of AIEC, the Association of Italian equity crowdfunding platforms, commented: “Equity crowdfunding is at a real turning point, not only for the expansion of the products that can be offered online, but also because the world of private banking is realizing the great opportunity to offer customers investments in the real economy, easily understandable and decidedly alternative compared to the products usually offered. interaction between the offer on the platform and the private banking network allows you to reach a very large audience, in line with the most appropriate risk profile for investing in illiquid real economy instruments, and to achieve important results in terms of funding: the campaign of Backtowork24 with Intesa on e-Novia is a European record, while the Club Deal Online initiative on D-Orbit it ranks among the three highest collections in Italy, despite the tragic period for the country “.

Lerro added that, based on his experience, “offering an investment in the real economy through private banking requires a very careful selection of the investment targets and, even more, a process of professionalization of the offering company in terms of governance and transparency, launching a qualitative definition which then becomes essential in the listing. It is reasonable to imagine that some equity crowdfunding platforms will specialize in an increasingly qualitative offer, with ambitious targets, for mature SMEs already close to an IPO process.  Others, however, will remain more focused on talent scouting and the promotion of innovative and scalable solutions. Still others will enhance their vertical experience on markets that have their own ontological autonomy such as the environment and real estate “.

Returning to the CrowdFundingBuzz data for March, net of the Fin-novia campaign, the month’s fundraising was less than 3 million euros. Moreover, in March, the average size of funding also fell, below  300k euros, and the average number of investors also fell, despite an increase in the average investment of individual investors: therefore probably the crisis discouraged private investors retail, but not HNWI.

The platforms that successfully closed multiple campaigns in the first quarter of 2020 were Backtowork and Crowdfundme with 9 campaigns each (the first raised 8.5 million and the second 4.3), followed by Mamacrowd (5 campaigns for 3.6 million) and TwoHundred (2 campaigns for 2.7 million). Other 6 platforms have successfully closed a campaign: WeAreStarting, Mybestinvest, Concrete Investing (real estate), Starsup, Fundera, Walliance (real estate). For MyBestInvest it was the debut campaign on the market.

Another positive sign for the sector is the fact that some campaigns, still in progress and launched between February and March, at the beginning of the crisis, are in any case overfunded with collections of over 100k euros  such as: Nausdream (tourism ), Tulips (e-commerce), Ener2Crowd (P2P energy lending), Yakkyofy (logistics), Remembrane (biotech). 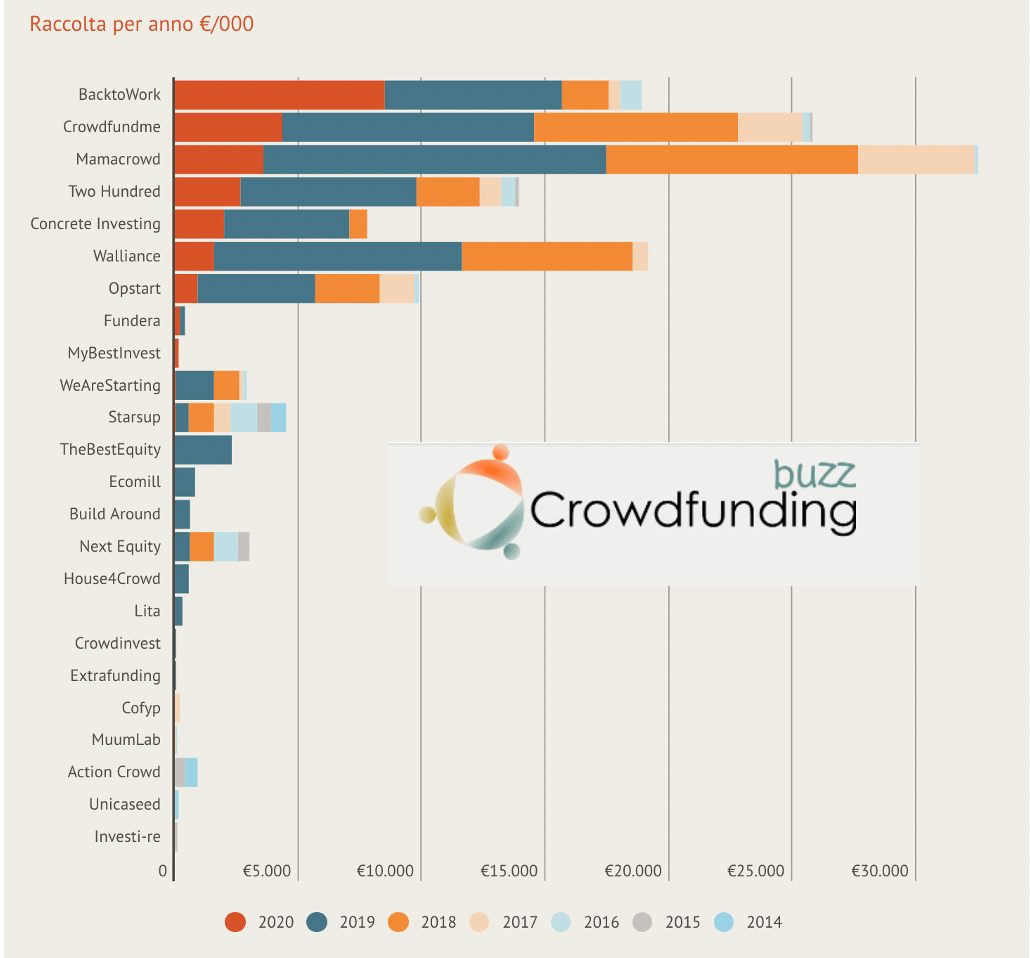