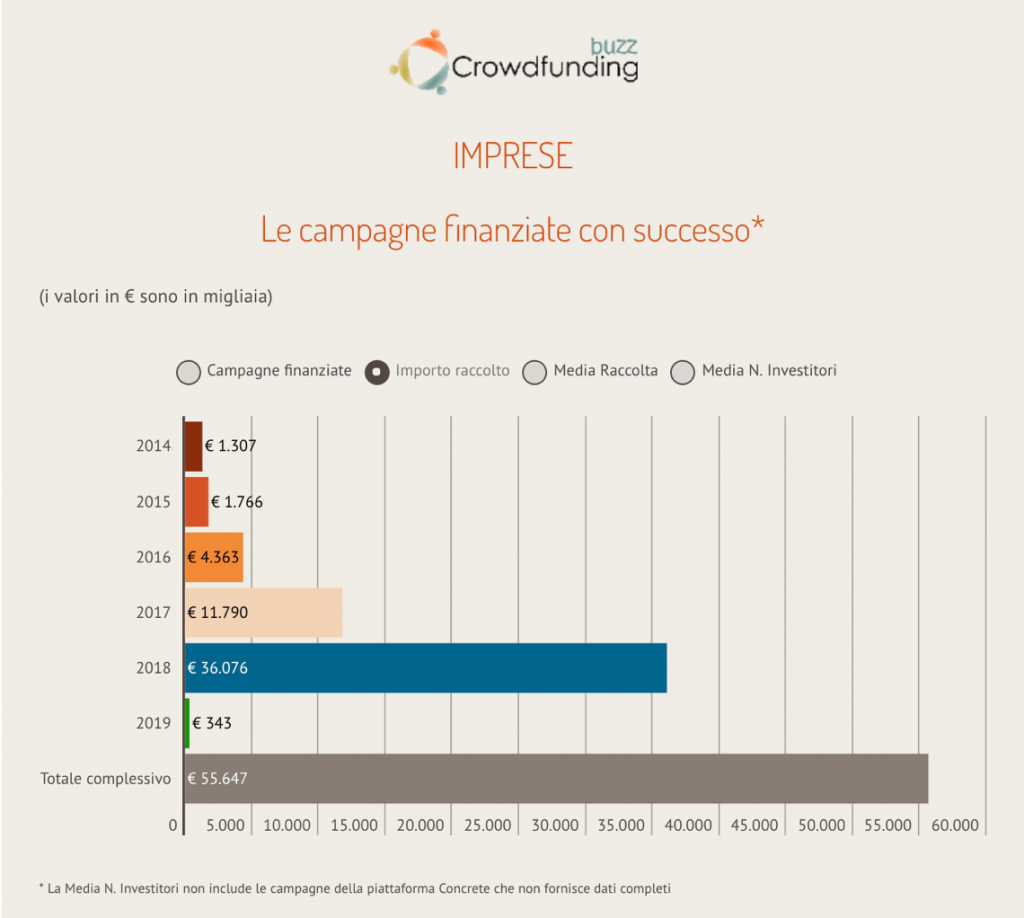 In 2018 Italian equity crowdfunding platforms collected more than three times the amount collected in 2017 with more than twice the number of successful campaigns. This was calculated by CrowdfundingBuzz,which summarized the crucial points of the year in this sector in this video Total fundraising exceeded 36 million euros in 2018 (11,7 miillions in 2017) and 114 companies were financed (50 in 2017). The number of investors also tripled, from around 3,300 in 2017 to almost 9,500 in 2018.

Among other things, these are results that have exceeded the estimate of the future of the market by 2 million euro, elaborated by EdiBeez (the publisher of BeBeez and CrowdfundingBuzz) only a little over two months ago in a study blessed by AIEC, the Association of Italian equity crowdfunding platforms (see here a previous post by BeBeez ).

The increase in the average size of the collection is also due to the fact that for the first time real estate crowdfunding campaigns have been closed, with an average of 1.1 million euros, much more than the sector average (7 successful campaigns of which 6 on Walliance and one on Concrete, for a total of 7.7 million euros). However, even net of the real estate crowdfunding, the average collection for startups and SMEs campaigns grew anyway: from 229k euros in 2017 to 265k 2018, thanks also to the largest number of investors per campaign (78 against 64).

The first three collection platforms (Mamacrowd, Crowdfundme and Walliance) contributed 70% of the total funding. But two of the other seven that have successfully closed campaigns have raised more than 2 millions (Opstart and 200 Crowd) and three have reached or exceeded one million (BacktoWork24, Starsup and WeAreStarting). In 2017, only Mamacrowd, Crowdfundme and Opstart had exceeded one million.

The campaigns that collected more than 500k euros were 17 (the previous year had been only 5) for a total of 16.9 millions (47% of the total fundraising), of which one (GlasstoPower, on Crowdfundme) above 2 millions and six over one million (4 real estate on Walliance, and one respectively on Mamacrowd and 200 Crowd). In general, this special ranking includes the aforementioned Walliance (6 campaigns closed over 500k), Mamacrowd (5 campaigns), BacktoWork24 (2 campaigns) and 200 Crowd, Crowdfundme, Concrete and NextEquity with one each.

Finally, last December three new platforms entered the market, two of which were generalist (Crowdinvest and TheBestEquity) and a real estate (Concrete). Two others announced their entry into the first quarter of 2019.

Deals on non-performing exposures topped 101 bn euros in Italy in 2018. New deals have been already announced for at least other 21 bn

Banca Ifis closes FBS acquisition. Here’s all you need to know about NPEs servicer m&a in Italy in 2018