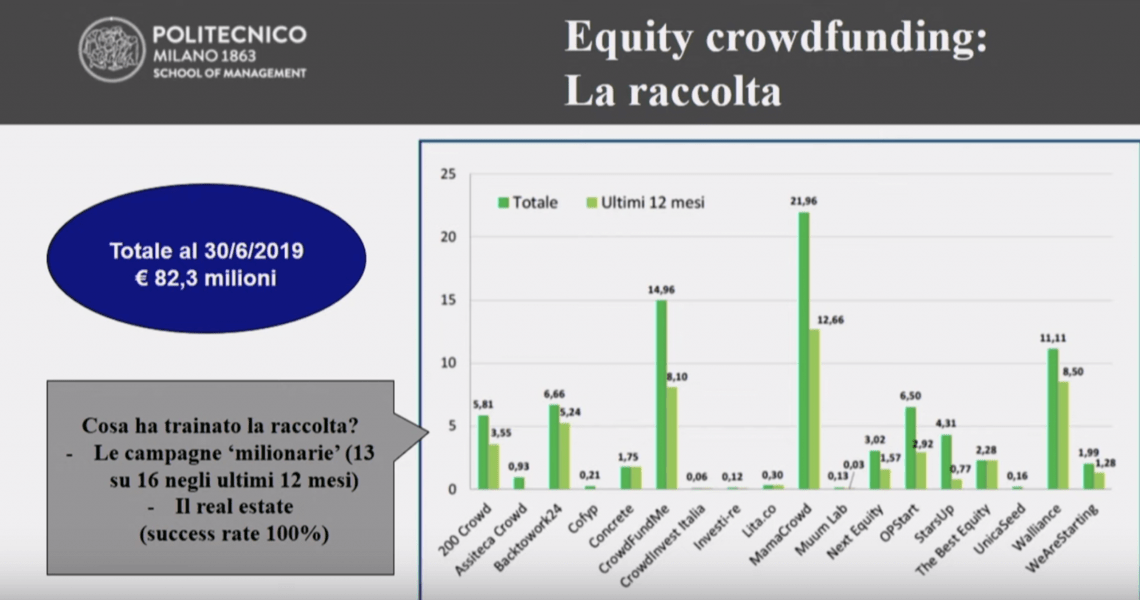 The total value of crowdinvesting in Italy since the start of the market in 2014 doubled in one year  to 517 million euro (see here a previous post byBeBeez), said the Fourth Italian CrowdInvesting Report of the Osservatorio Crowdinvesting of Milan Polytechnic School of Management of which Giancarlo Giudici is the director. More in detail, on June 30th equity crowdfunding platforms in italy had raised a total of more than 82 million euros from when the market was launched while lending crowdfunding platforms reached a total raising of 435 millions.  For 2019 equity crowdfunding may amount to 60 million euros.

Italian innovative startup and SMEs investor i-RFK and Cesynt Advanced Solutions, the owner of e-learning platform iSkilled  are both entering a crowdlisting path including a previous equity crowdfnding campaign and then listin on one of Euronext’s markets (see here a previous post by BeBeez). i-RFK alread opened its equity crowdfunding campaign on CrowdFundMe with a  pre-money valuation of 8 million euros and a minimum investment of 20k euros and a target of 500k euro equal to a 5.9% stake.  Cesynt Advanced Solutionswill instead launch its own equity crowdfunding campaign on Opstart targeting one million euros of raising.

Winelivery, the ecommerce platform for the wine sector, launched a round bridge with a target of 1.5 million euros to close by mid-October, said the company’s founder Francesco Magro to BeBeez and CrowdfundingBuzz (see here a previous post by BeBeez). The round , which may include convertible notes, is in view of the launch of an ipo scheduled for the next two years, as soon as Winelivery will have a positive ebitda. Andrea Antinori co-founded the company in 2016.
Giuseppe Vegas, the former chairman of the Italian stock market regulator Consob, is a board memebr of the soon-to-be listed Italian economic and financial social network UCapital24, that ceo Gianmaria Feleppa founded (see here a previous post by BeBeez). Vegas is also involved with other Italian fintech startups both as an advisor (SelfieWealth) and as an investor (PopFin and ARisk). As for UCapital 24, investors may join the ipo too, sources said to BeBeez.  UCapital24 is looking for placing a 10% stake of its capital on the market in a 3-5 million euros capital increase deal.
Italian editing startup Boom imagestudio raised 3 million euros of seed capital from private investors and family offices (see here a previous post by BeBeez). Federico Mattia Dolci,Giacomo Grattirola, and Jacopo Benedetti founded the company in 2018.
The Italian marketing scaleup Next 14 acquired Iottacle, an IoT startup (see here a previous post by BeBeez). Daniele Righi and Marco Abitabile (cto) founded the target company. Marco Ferrari(ceo) and Matteo Scortegagna founded Next 14 in 2014.
Dilium, a digital transformation startup, won the Call for Ideas Automotive Intelligence and Big Data that Réseau Entreprendre Lombardy launched together with Arval, a provider of long term car rental that belongs to Bnp Paribas (see here a previous post by BeBeez). Donato De Ieso(ceo) founded the company together with business developer manager Gianluigi Gollo.