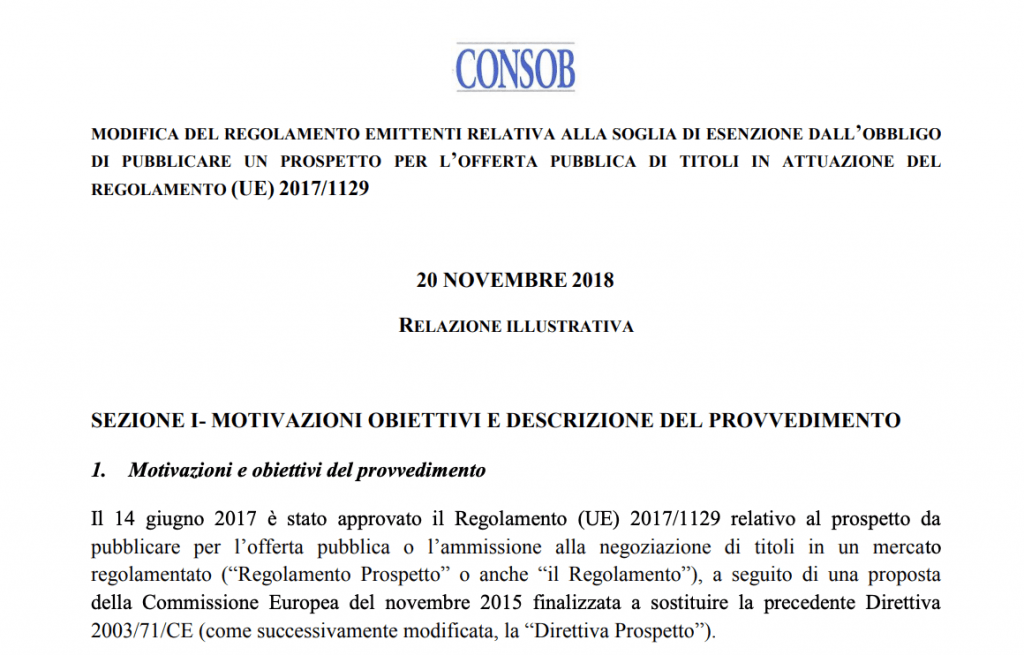 The European Parliament’s Commitee for economic and monetary matters drafted new rules for equity crowdfunding and confirmed it raised to 8 million of euros the upper limit for a single campaign, but has not included the possibility to host ICOs on the platforms as it was proposed in a first draft (see here a previous post by BeBeez).
In the meantime Italy’s Consob allowed Italy’s issuers of financial instruments to raise capital without publishing a formal prospect till a maximum raising of 8 mln euros (see here a previous post by BeBeez). The news which was confirmed yesterday, was anticipated last Friday at a conference in Milan by Alessandro Lerro, the chairman of the Italian Association for Equity Crowdfunding (AIEC) and of the scientific commitee of Assofintech, the Italian association of fintech businesses. Lerro stressed that the news is quite helpful for the development of the Italian equity crowdfunding market and as well as it will be the news that equity crowdfunding platforms may host the placement of minibonds and other debt instruments for institutional investors as requested in a amendment to the 2019 Italy’s Budget Law by a group of MPs of the Italian Party Lega (part of the Government): Erik Umberto Pretto, Giuseppe Ercole Bellachioma, Vanessa Cattoi, Emanuele Cestari, Rebecca Frassini, Alberto Ribolla, and Maura Tomasi.

Brandon Group, an Italian company that develops online sales for the sectors of fashion, sport, home & living, and beauty, raised 3 million of euros from Primomiglio, Invitalia Ventures, Sella Venture, Sinergenis (a company that Franco Gianera, the former country manager of Amazon Buy Vip, founded), Ecilog, and Vulcano (the investment vehicle of Fabio Cannavale) (see here aprevious post by BeBeez). Brandon Group was born in 2012, and in 1H17 generated sales of 4.7 million (+250% yoy). The company will invest these proceeds in strengthening its core business.

Soisy, a fintech lending platform for online commerce, closed in advance its equity crowdfunding campaign on 200Crowd, as it raised 1.25 million of euros in one week (see here a previous post byBeBeez). Soisy raised 0.35 million more than the initial maximum  target of 0.9 million target.