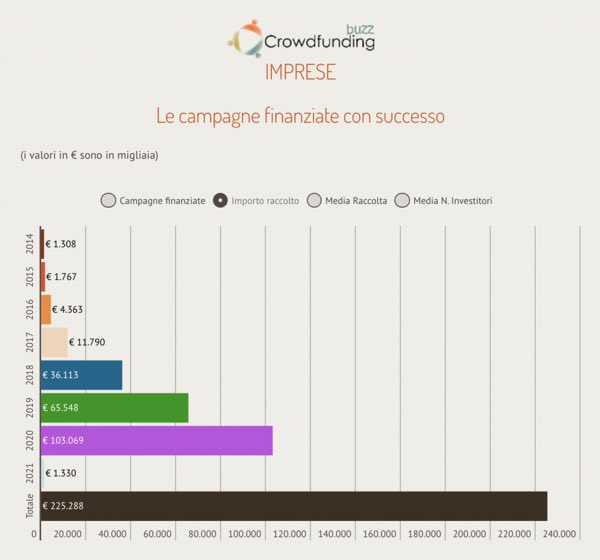 In 2020, Italian equity crowdfuding platforms raised 103 million euros for 159 campaigns (65 millions for 139 campaigns in 2019), according to the data of CrowdfundingBuzz (a publication EdiBeez srl, the publisher of BeBeez) (see here a previous post by BeBeez). In 4Q20, the Italian platforms raised 47 million for 61 campaigns.

Angelini Pharma, a pharmaceutical company that belongs to the eponymous family, acquired Arvelle Therapeutics, a Swiss developer of drugs for neurological diseases (see here a previous post by BeBeez). Angelini has sales of 1.7 billion euros and invested its own resources and a facility of 500 millions from Intesa Sanpaolo, Bnp Paribas, Crédit Agricole, Mps, Banco Bpm, and Popolare di Ragusa. The target’s enterprise value amounts to up to 960 million US Dollars (610 millions paid once received the approval of regulatory agencies and 350 millions as eventual earn-out). Headquartered in Basel, Switzerland, Arvelle was founded in 2019 by Gregory M. Weinhoff, Ilise Lombardo and Mark Altmeyer and has cashed in a 207.8 million dollars Series A funding round in multiple tranches, including thelast in May 2020, from LSP, NovaQuest, BRV Capital Management, Andera Partners, HIGBioHealth Partners, F-Prime Capital and KB Investments which allowed the newborn Arvelle to acquire the exclusive marketing rights in Europe of the cenobamate from SK Biopharmaceuticals. The latter is parte of SK group, a Korean conglomerate listed at the Seul Stock Exchange. SK Biopharmaceuticals is a shareholder in Arvelle too and will sell its 12% stake to Angelini.

Italian startup for reforestation Treedom raised 3 million euros from Banca Generali’s vehicle 8A+ Real Innovation born in June 2020 (see here a previous post by BeBeez). The fund invests 70% in debt (senior secured loan and real estate financing for European assets) and 30% in equity. In November 2019, Treedom launched a round of 8 million on the ground of a pre-money value of 33 million. The round will end on 30 June, Wednesday. Treedom will invest these proceeds in its expansion in the UK, France, Spain, Benelux, Sweden, Denmark, and Finland ahead of the launch of an IPO. In April 2017, the company raised 2.45 million from Ersel, Antonello Manuli Holding, Rancilio Cube,U-Start Club,Sella Ventures, and othe private investors. Treedom has sales of 3.65 million, an ebitda of 0.517 million and net cash of 1.6 million.

PatchAi, an Italian sartup that created an AI and machine learning based virtual assistant for patients, raised 1.7 million euros from UV Cap, SFEM Italia and Healthware Ventures (fka Estense Venture) (se here a previous post by BeBeez). PatchAi received the acceleration support from Silicon Valley – based Plug and Play and raised 2.56 million since its birth in in August 2018. In March 2019, the company raised 0.110 million through a round that Germany’s fund UVCAP led. In July 2019, PatchAi attracted 0.75 million from UVCAP, Healthware Ventures, Padda Health, Avalanche Investments, and other business angels. Alessandro Monterosso, Filip Ivancic, Kumara Palanivel, and Daniele Farro founded PatchAi.

Vitesy, a California-based producer of smart devices for air-cleansing, raised 1.2 million euros through a club deal on crowdfunding portal Doorway (see here a previous post by BeBeez). Alessio D’Andrea, Vincenzo Vitiello and Paolo Ganis founded Vitesy in 2015. Doorway raised 0.5 million from its members, 0.5 million from business angels and 0.2 million as a bridge facility.