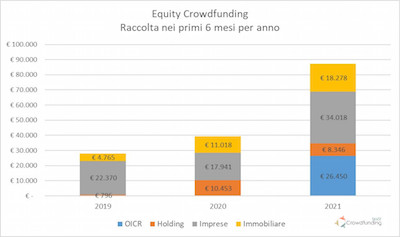 The data of CrowdfundingBuzz (part of EdiBeez srl, the publisher of BeBeez) said that in 1H21 the crowd investments in Italy amounted to 87 million euros (40 millions in 2020) (see here a previous post by BeBeez). CrowdfundingBuzz data say that the Italian equity crowdfuding platform raised 103 million in 2020 for 159 campaigns (65 million for 139 campaigns in in 2019).

InfinityHub, an Italian social energy and benefit company, launched its 12th equity crowdfunding campaign on CrowdFundMe on the ground of an enterprise value of 37.5 million euros ahead of a listing that will take place in 2023 (see here a previous post by BeBeez). The company already raised 651k euros for this campaign, well above the 329k euros target, for a 1.7% stake. Massimiliano Braghin founded Infinityhub which has a turnover of 3.5 millions.

Cdp Venture Capital launched FuturED, an acceleration programme  for the edtech sector, through its subsidiary Fondo Acceleratori (see here a previous post by BeBeez). The programme has resources of 1.65 million euros and may raise further 1.5 millions for follow-on post acceleration investments. FuturEd has a tenure of 3 years and aims to accelerate 30 startups.

YouniteStars, a venture company that targets high performance e-businesses and owns the brand Senso, received a direct lending facility of 2.4 million euros with the support of Azimut Direct (fka Epic sim) (See here a previous post by BeBeez). The company previously attracted a direct lending facility of 3 million from HI CrescItalia Pmi Fund, a private debt vehicle gestito of Hedge Invest. YouniteStars raised 6 million in equity and financing facility since Gianmaria Monteleone founded the business at the end of 2020.

ShippyPro, an Italian startup that developed a shipping technology for e-commerce companies, attracted a 5 million US Dollars investment from Five Elms Capital (See here a previous post by BeBeez). The company will invest these proceeds in expanding its international activities. Francesco Borghi (ceo) and Lorenzo Rogai (cto) founded ShippyPro in 2016.

Lampoo, an online marketplace for second hand clothes, attracted a 6 million euros investment from a club deal that Proximity Capital and FG2 Capital launched (see here a previous post by BeBeez). Enrico Trombini is the ceo and founder of Lampoo. The company will invest the raised proceeds in its proprietary technology and marketing. In February 2019, attracted a one million investment from Moffu Labs and others.