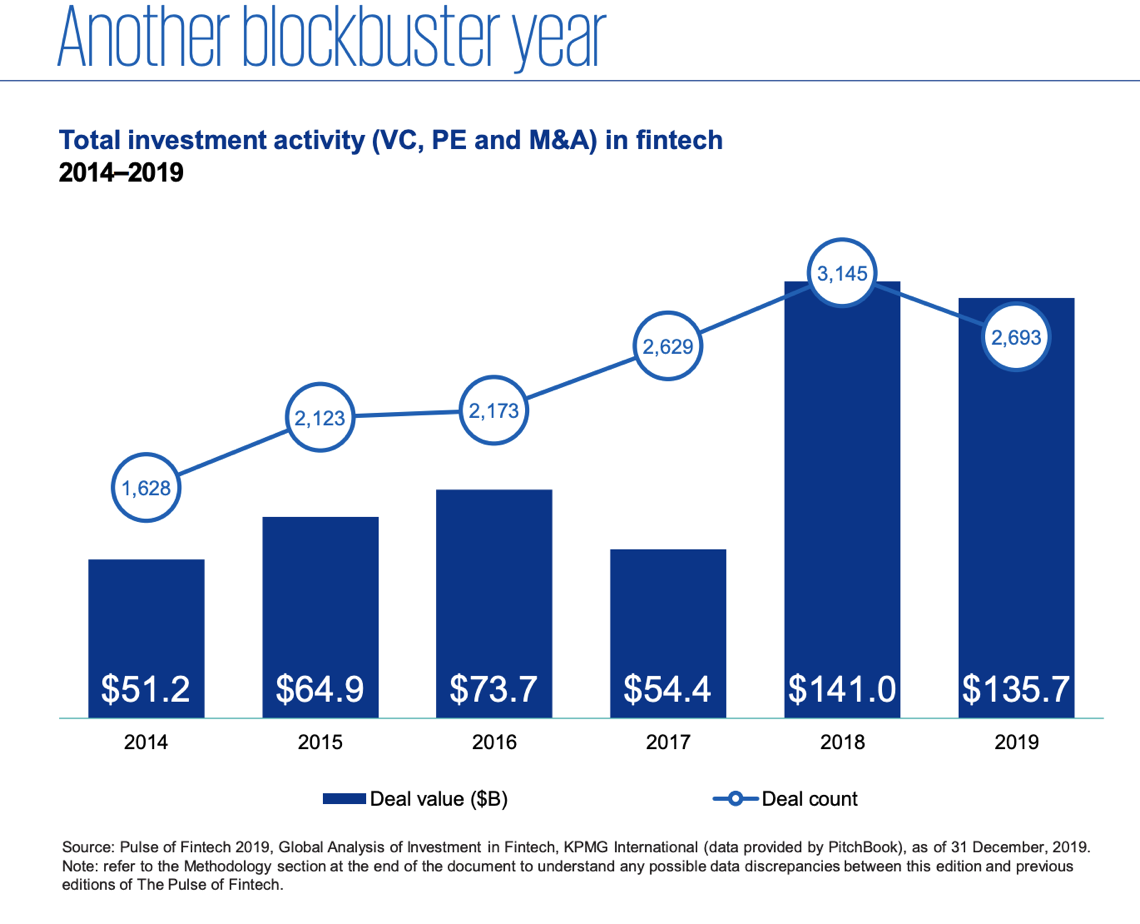 In 2019, the fintech sector attracted investments for 135.7 billion US dollars in the world for 2,693 m&a, private equity and venture capital transactions (141 billion for 3,145 deals in 2018)  The Pulse of Fintech Report by Kpmg says (see here a previous post by BeBeez). For 2020, the fintech could gain a boost from the growing interest for the open banking sector, the change of the regulatory frame as well as the development of the technology based on the artificial intelligence and the blockchain. The Covid-19 turmoil could support such trend. In 1Q20, the Italian fintech startups and scaleups raised 110 million euros, while venture capital investments in fintech companies in Italy for 2019 were worth 261 millions (200 millions in 2018), according to  BeBeez Private Data  (see here the BeBeez Fintech Report for 1Q20 and 2019 and BeBeez Fintech Report 2018 available for the subscribers to BeBeez News Premium). BeBeez includes debt rounds as well in the venture capital investments, which in turn also aggregate the investment holdings, the corporate venture capital, companies, family offices, business angels, and investors in equity crowdfunding campaigns. The PwC Report about Italian Fintech in 2020 says that investors may show less interest than before in seed rounds, while a consolidation trend could take place in the sectors of lending, customer experience, onboarding solutions, KYC, cybersecurity, Artificial Intelligence, advanced analytics, conversational interfaces, and the blockchain, said Roberto Lorini, FinTech Leader of PwC Italy.

Japal, an e-commerce firm that Paolo Broglia, Jacopo Moschini and Jacopo Paoletti founded in 2018, raised 300k euros from private investors (see here a previous post by BeBeez). Japa raised a 55k euros seed capital facility through an equity crowdfunding campaign on OpStart on the ground of a pre-money value of 1.5 million. Broglia said to BeBeez that the company generated sales of 0.5 million and set a 1 million target. The company supported the no-profit Fondazione Rava for acquiring medical devices for acquiring intensive care devices.

Filo raised 2.5 million euros in equity and debt from LVenture Group, Pi Campus, Al.Pe Invest and several business angels (see here a previous post by BeBeez). The company will invest such proceeds in the launch of the Tata Pad, an antiabandonment pillow for children seats in the car. In October 2015, Filo attracted a 0.5 million investment from LVenture Group (0.1 million), PiCampus and Angel Partner Group, now part of Italian Angels for Growth. Andrea Gattini (cmo), Francesco Ceccherelli (cco), Giorgio Sadolfo (ceo), and Stefania De Roberto (cto) founded Filo in September 2014. The Rome-based company has sales of 0.807 million, an ebitda of minus 0.454 million and net cash of 87,000 euros.

Codemotion, an international network of professionals and companies for the software development sector, raised 6 million euros from P101 (lead investor) (see here a previous post by BeBeez). ITA500 (a co-investment fund that Azimut launched), Primomiglio, and Cdp Venture Capital (fka Invitalia Venture) joined the investment round. Chiara Russo (ceo) and Mara Marzocchi founded Codemotion. In June 2019, the company raised 2.5 million from Invitalia Ventures and Primomiglio. Codemotion will invest such proceeds in expanding its international activities and its organic development. The company aims to reach a turnover of 30 million by 2023.

The crowdfunding campaign for the Italian travel and leisure startup Nausdream went in overfunding on the platform Two Hundred (see here a previous post by BeBeez). The company also announced to have signed a partnership with Silversea, an English provider of luxury cruises. Primomiglio invested in Nausdream, which launched its equity crowdfunding campaign at the end of February 2020 with a target of 0.12 (for a 5.56% stake) – 0.35 million euros on the ground of a pre-money value of 2.04 million. Nausdream raised 0.125 million from 35 investors. Marco Deiosso (ceo) founded the company together with Antonietta Melis, Ousmane Dieng, and Giuseppe Basciu. Contamination Lab supported Nausdream which raised 0.63 million between 2017 and 2019 from Primomiglio, Gian Luca Puggioni, the current company’s chairman, and other business angels.

The Data Appeal Company (former Travel Appeal), an Italian scaleup for the tourism data analysis with the artificial intelligence, signed a partnership with open banking platform Fabrick for sharing its API and make them available from May 2020 (see here a previous post by BeBeez). Paolo Zaccardi is the ceo of Fabrick. Mirko Lalli is the ceo and founder of The Data Appeal Company that was born in January 2014 in the H-Farm Campus of Ca’ Tron. TDAC has sales of 1.11 million euros, an ebitda of minus 0.53 million, and net cash of 1.27 million. H-Farm poured 0.25 million in TDAC in 2014, when the company joined the acceleration programme of Unicredit Start Lab. In Aprile 2015, TDAC raised 0.1 million from Unicredit and H-Farm. In March 2017, the startup received 0.72 million from three entrepreneurs of the tourism sector who acquired a 12% of the business for a post-money value of 6 million. In May 2018, Dutch Airbridge Equity Partners acquired from Milan-listed H-Farm a 15% of TDAC for 0.9 million (si veda altro articolo di BeBeez). In October 2018, TDAC raised 3 million from Indaco Ventures Partners and Airbridge Equity Partners. Banca Sella has a controlling stake in Fabrick.

HUMCO, a provider of corporate support services based on artificial intelligence, developed a system for identifying the carriers of Covid-19 virus. (See here a previous post by BeBeez). The company is born in 2019 as an internal development of Logos Technologies, a B2B provider of ICT services. Humco attracted investments of board member Diego Barbisan, the vice president of IT company GPA and Morocolor Italia, a producer of pencils and markers.

Digital payments strike an 11% growth in Italy in 2019, while banks startup working with BigTech companies, the Milan Polytechnic Observatory on Innovative Payments says