Italy’s fintech scaleup Supply@Me will list in London on March 23. With a 227.5 mln pound market cap 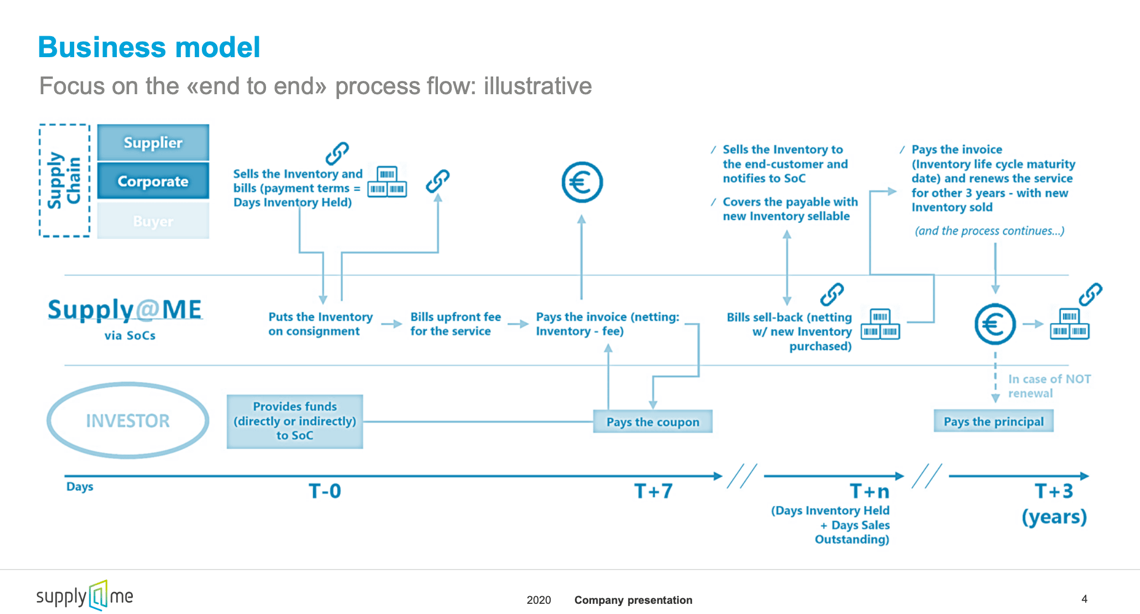 Supply@Me Capital plc is going to be listed on the main list of the London Stock Exchange on Monday 23 March, with a capitalization of 227.5 million pounds and a free float of 26%, following the reverse merger between the Italian scaleup fintech Supply @ Me srl and Abal Group, a so-called cash-shell company, which until the beginning of February was listed on the Aim market in London and which will be renamed precisely Supply@ Me Capital (see here the communication to Abal shareholders and here the press release).

When in February 2019 Abal Group was still called Imaginitik plc and still listed on Aim London, it sold its innovative management software to the Canadian company Planbox for 2.5 million pounds and as the software represented all of its assets, Imginitik renamed into Abel Group and  turned into a cash-only company. By regulation of Aim London Abal had 6 months to conduct an acquisition or to raise at least 6 million pounds on the market, otherwise it would have been suspended from trading. In August 2019 any  acquisition had not yet been completed, therefore the stock was suspended. Again according to Aim London regulations, the suspension could last for 6 months, but then, continuing the causes of the suspension, the title had to be delisted, which happened on 7 February 2020.

Meanwhile, Abal in late September 2019 entered into an agreement to acquire the entire capital of Supply@Me for 224.478 million pounds, announcing that it would have paid the acquisition with the proceeds of a new listing, this time on the main LSE list. The current shareholders of Supply@Me will subscribe the new shares at a price of 0.6945 pounds per share while a small portion of these new share will be also subscribed by third party investors for a total of 39.9 million pounds. Abal Group has also announced that it will place other shares at the same price as a capital increase for a total gross value of 2.2 million pounds, subscribed by professionals, high net worth individuals and institutional investors, to finance the development of the platform. All this will take place after the go-ahead of the Abal Group shareholders meeting scheduled for Friday, March 20. Alessandro Zamboni, founder and ceo of Supply@Me, will be the ceo of the new reality.

Supply@ Me is today 92.2% controlled by TheAvantGarde Group spa, which in turn belongs to Zamboni and other investors, while the remaining 7.8% is owned by a group of investors who in June 2019 had subscribed to a club deal investing 2 million euros in capital increase, based on a 100% equity value for Supply@ Me of 25 million euros. At the end of the operation, TheAvantGarde Group will dilute to 72.95%, while Equita sim and Ceresio sim will enter as new investors on behalf of their private customers,  and the Maltese asset manager Parrot Capital (Global Capital Plc), each with 4.98%.

Supply@Me operates in the segment of the so-called inventory monetization, that is, the enhancement of the warehouse of industrial companies. In fact, through the Supply@Me platform, companies can create value from their inventories, optimizing their working capital and improve the efficiency of the supply chain. Inventories are demobilized thanks to the use of smart contracts and the use of a blockchain by Sia, the group specialized in payment infrastructures controlled by Cdp Equity. Thanks to SiaChain the platform is actually able to analyze and monitor prices and quantities of the various stocks (see the press release here). Supply@Me purchases the inventories from client companies through SPVs which in turn securitize the inventories and sell the asset backed securities to institutional investors. Possession of inventories remains in the hands of the client company, which, when selling the goods, reimburses the SPV with further inventories from the warehouse. This tour lasts for 3 years and only the last transaction will be reimbursed in cash, while any unsold will be repurchased by a reseller with whom Supply@Me has already entered into a preventive agreement for the purchase at a pre-set price.

The important updated assessment of Supply@Me compared to that of mid-2019 is due to the fact that in the meantime “the company has originated contracts with client companies for the disposal of the warehouse for a total total of over 900 million euros and that it is three-year contracts, which offer investors of securitization notes a more competitive yield range than financial products existing on the market in the context of working capital”, Mr. Zamboni explained to BeBeez, adding that “in the meantime we are signing agreements with institutional investors” and that “we have invested more than 1.5 million euros in legal fees to have a bullet proof structure and be operational from this year “. And Mr. Zamboni added: “In April, we will bring our first issue on the market for a value greater than 250 million euros, which will be placed by an important UK operator with which we have an agreement for a total of one billion euros of issues distributed in four tranches and we have a target of 3.5 billion euros in 2023 “.