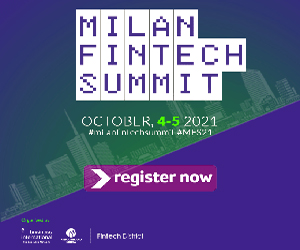 On 4 and 5 October October, Monday and Tuesday, took place the second edition of Milan Fintech Summit, an event of Fintech District and of Business International, part of Fiera Milano Media. BeBeez was media partner. The list of attendees included Lizzie Chapman, ceo & co-founder of ZestMoney, Eric Demuth, the ceo of Bitpanda, Yoni Assia, the ceo of eToro, and Alexander Kemper, the ceo of C2FO. Those who attended the Milan Fintech Summit get a 15% discount for the subscription to BeBeez News Premium and get access to BeBeez Report and Insight Views. Click here for the latest Fintech Report and send the proof of attendance to Milan Fintech Summit to info@edibeez.it to get a discount code.

Milan-listed Azimut launched Azimut Marketplace by Step, a platform that supplies SMEs with fintech tools and open banking services (see here a previous post by BeBeez). Marco Montagnani, Nuno Couceiro Cortesao and Alberto Almoguera Marton created the platform aimed at supplying a digital ecosystem of fintech tools for SMEs. Andrea Bertini and Pierluigi Giannico also invested in the project. Azimut owns 43% of Azimut Marketplace srl  (but it would acquire the whole business upon the achievement of undisclosed targets), while the rest of the capital is owned by Step 4 Business and other minority shareholders. Step aims to launch a similar marketplace in Spain and Portugal.  At the same time Azimut announced the launch of a venture capital fund with a 75 million dollars fundraising target, based in Singapore, focused on investments in Southeast Asia and Europe in the digital assets sector. The fund was launched by Azimut together with the Japanese asset manager SBI and Sygnum Bank, the first digital asset bank in the world, authorized by the supervisory bodies of Switzerland and Singapore, which is the same bank that last March joined Azimut in the issuance of the Azimut Token (Azim), the first token for investing in the real economy (see here a previous article by BeBeez). With SBI Ven Capital as the lead manager, the fund’s investment strategy will primarily focus on pre-series A and series A companies developing blockchain / distributed ledger technology (DLT) infrastructures, decentralized finance solutions (DeFi) and reg-tech tools. The launch of the Digital Asset Opportunity SCSp fund had been anticipated in recent months (see here a previous article by BeBeez).

Cdp Venture Capital and the European Investment Fund (EIF) signed an agreement for investing up to 260 million euros in the technological transfert sector in order to give continuity to the ITAtech initiative, a joint platform they launched in 2016 with a 200 million euros committement which has been now entirely called (see here a previous post by BeBeez). Cdp Venture Capital will allocate up to 130 millions in the new project that will have resources available for over 400 millions.

Skydweller Aero, an US-based scaleup operating in the sector of Unmanned aircraft systems (UASs) with solar power, attracted an investment of 4 million dollars from  Neva sgr (part of Intesa Sanpaolo), part of an 8 million dollar round which was also subscribed by Milan-listed Leonardo, Marlinspike Capital, and Advection Growth Capital (see here a previous post by BeBeez). Skydweller previously also attracted the resources of NYSE-listed Palantir Technologies and of ACE Investment Partners and ACE&Company.  While in novembre 2019 Leonardo had already invested 32 million euros.

Italian startup studio Mamazen launched IH1, a financial investment holding  (see here a previous post by BeBeez). Mamazen has the goal of creating 15 successful startups in 5 years: IH1 will invest a total of 10 million euros, of which 3 millions in Mamazen and 7 millions in the top ten startups that the Mamazen will launch. Alessandro Farhad Mohammadi, the ceo of Mamazen, leads IH1 together with Alessandro Mina and Alexandre Campra.

Vedrai, an Italian provider of Artificial Intelligence platforms for SMEs, acquired 51% of Premoneo (fka Dynamitick), a provider of dynamic pricing solutions for the tourism and leisure sectors(see here a previous post by BeBeez). LVenture Group, Boost Heroes, Wylab, Open Seed, and other business angels sold their stakes in the target. Federico Quarato, Marco Alò and Massimo Dell’Erba founded Premoneo in 2016.

Lithium Lasers, a spinoff of Milan Polytecnhic University that received the incubation support of PoliHub, raised 700k euros from investors (see here a previous post by BeBeez). The company attracted the resources of Poli360, the tech transfer fund of 360 Capital and Milan Polytechnic University. Alessandro Greborio founded the company in 2019. Lithium will invest the raised proceeds in its organic development and international expansion.

Deloitte Consulting and Assofintech signed a partnership for providing services for analysis and research about the fintech and insurtech sectors and their ecosystems (se here a previous post by BeBeez). Paolo Gianturco is the Business Operations and FinTech team leader of Deloitte Consulting. Maurizio Bernardo is the chairman of AssoFintech.