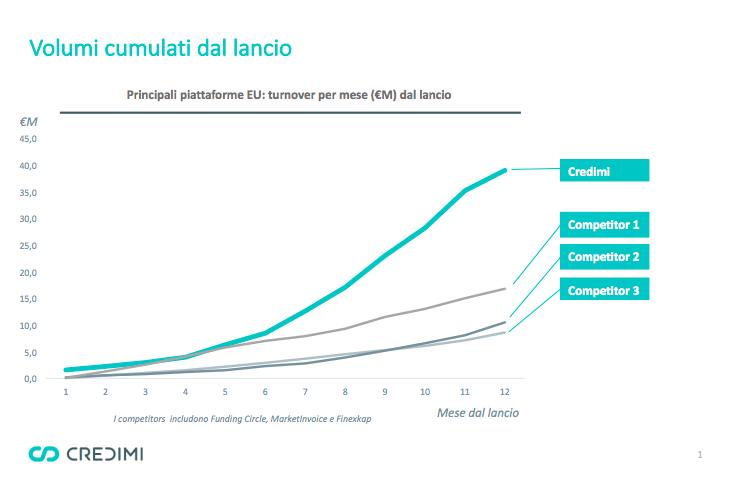 A 300 million euros of dry powder. This is now the financial power of Credimi, an Italian digital platform for instant financing of trade invoices, founded two year ago by Ignazio Rocco di Torrepadula (a former senior advisor at Boston Consulting Group and head of the financial institutions practice for Central Europe and now senior advisor to Tikehau Capital) together with a group of young managers with digital and financial expertise.

That decision actually brought the total equity that may be deployed in investing in trade receivables to 72.5 million euros, including a 5% commitment by Credimi itself. However, as each trade receivable has less-than-3 months maturity, this means that equity may be used more than 4 times per year. So that’s why about 300 million euros of dry powder.

Mrs. Todeschini explained that “since the end of 2016 till now we have been buying more than 2 thousand invoices and called about half of ìprevious committments from our  investors that are Anima sgr, Anthilia Capital Partners sgr, BG Fund Management Luxembourg sa ( Banca Generali) and Tikehau Capital. Those capital has been used on a revolving basis so that in ten months we have issued financing for about 40 million euros, which is a record in comparrison to what have done our European competitors (i.e. Funding Circle, MarketInvoice and Finexkap, note of the editor) in the early stage of their life”.

Mrs. Todeschini also added that “about 35% of our financing went to suppliers of big or medium-size companies on the basis of so-called ‘credito di filiera’ agreements. For example we signed those agreements with Italian companies  Ariston Thermo and Pittarosso and with foreign group JAB, owner of the well-known shoe brands Jimmy Choo and Bally. As for the remaining 65%, we have financed directly both medium-sized companies such as ItaChoo (JAB group) or Giglio Group and SMEs such as cybersecurity expert Emaze or Akinda web agency”.

Till now  gross yield for investors has been about 4%, including a 0.3% default rate. Investors do not buy invoices directly on the platform, while they subscribe partly paid asset backed securities issued by securitization veichle Lumen spv (former named Merlino spv). Those abs pay a quarterly coupon equal to euribor 3m plus 450 basis points per year.