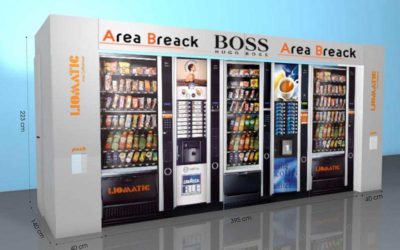 Piazza Affari blesses the business combination between IVS Group, a Milan-listed company active in the automatic distribution of snacks and drinks, and its competitor Liomatic, announced on Friday 22 October, which will create a group that in 2020 has sold over 700 million drinks with over 260,000 vending machines installed and which has 3,400 employees and a market share in vending in Italy in the order of 17-18%. The IVS price on the stock market yesterday closed the session up by 3.22% to 6.42 euros, corresponding to a capitalization of around 250 million euros.

In the transaction, IVS Group is assisted by TALEA Tax Legal Advisory for the investment agreement and by Latham & Watkins for the market profiles. The Caporali family is followed by ADR.

In essence, this will be a business combination, which initially involves the acquisition by IVS of the shares of Liomatic now owned by the Caporali family and the subsequent reinvestment in IVS Partecipazioni spa by the Caporali family of a preponderant part of the agreed consideration (between 70% and 80%), becoming one of the main shareholders, with a stake of between 10.8-10.9% and 13.2-13.3%. IVS Partecipazioni is the controlling shareholder of IVS Group, with a 62.15% stake (calculated net of treasury shares), while the Caporali family today controls the 80% of Liomatic through their holding Cafim srl (see here the press release of IVS of 22 October, here the clarification note from IVS released yesterday, here the note from Liomatic and here the press release of the advisors).

The net consideration that will be raised by Cafim for the sale of Liomatic, in fact, will be between 100 and 105 million euros. This figure is reached by considering for Liomatic an initial total enterprise value of approximately 154 million euros, excluding operating properties and ancillary minority interests held by Liomatic and not subject to line-by-line consolidation. The preliminary value attributed to all of these assets (properties and minority shareholdings) is other approximately 52 million euros, but this assessment is subject to confirmatory due diligence, an activity already started following the signing of the framework agreement. The exact equity value of the Liomatic group will be determined on the basis of the net financial position (NFP) at the closing date of the transaction. By way of reference, considering only the consolidated assets to which the EV of 154 millions is attributed, the NFP is equal to 63.5 millions, which means an equity value of approximately 90 millions. Figure to which the equity value relating to the properties and equity investments not fully consolidated should then be added.

Liomatic, founded by Paolo Caporali in 1973, is one of the main operators in the vending sector, based in Ponte S. Giovanni (Perugia) and a consolidated presence especially in the regions of central Italy. Liomatic has 6 branches and 33,000 vending machines and operates in Italy, Spain, Portugal and Germany. Its name derives from that of the first freeze-dried coffee dispenser for offices: the Liofaemina. The consolidated turnover of Liomatic in 2020 was 109 million euros, down from 144 millions in 2019. The activities of the Liomatic group also include the main Italian organization in the resale of products to vending operators, with a turnover of approximately 55 millions in 2020 and 64 millions in 2019. Today the company is led by Paolo Caporali, together with the chairwoman Bruna Lepri and the two co-ceo Ilaria and Camilla Caporali.

IVS Group is the Italian leader and second operator in Europe in the management of automatic and semi-automatic vending machines for the supply of hot, cold and snack drinks (vending). The core activity of vending takes place mainly in Italy (82% of turnover), in France, Spain and Switzerland, with approximately 230,000 automatic and semi-automatic vending machines; the group has a network of 87 branches and approximately 2,750 employees. IVS Group, which serves more than 15,000 companies and entities, closed the 2020 financial statements with 329.9 million euros in revenues, an adjusted ebitda of 61.9 millions and a loss of 15, 3 millions, with a net financial debt of 353.8 millions (see the press release here), while in the first 6 months of 2021 it reached 167.2 million euros in revenues (+ 3.5% from the first half of 2020 ), 34.6 millions adjusted ebitda (+ 6.9%) and returned to profit which was worth 3.7 millions, against a net financial debt down to 328.3 million (see the press release here).

The group that will be born from the business combination, therefore, in 2020 had recorded a consolidated (pro-forma) turnover of 439 million euros against 700 million consumption and an ebitda margin of 18%. But in 2019, before the impact of the lockdown, consumption had been more than one billion, the consolidated (pro-forma) turnover resulting from the business combination was 607 millions and the ebitda margin was 20.5%.

Paolo Caporali stated: “We see great potential for improvement both in the service offered on a national scale and in boosting the issues of sustainability and enhancement of human capital, which have always been key assets of our corporate strategy. The investment that the Caporali family signs in the shareholding of IVS Partecipazioni testifies to the desire for continuity and sharing of this great aggregation project”.

Antonio Tartaro, co-ceo of IVS Group, added: “The agreement with the Caporali family is an essential step in the inevitable consolidation process in the vending sector, in which those who will be able to offer customers innovative and increasingly better services will be successful. . The combination of two excellences such as IVS and Liomatic will increase results and development capacity, also looking at increasing digitalization, with targeted investments. Vending is in direct contact every day with tens of millions of consumers, whose personalized knowledge represents a great advantage for responding effectively to the evolution of consumption models in specialized distribution and, more generally, represents an opportunity for the entire sector. food & beverage, which in many market segments, such as that of espresso coffee, is a typically Italian excellence, to be developed also on an international scale “.

Founded in 1972 by Cesare Cerea and Pietro Gualdi, IVS Group was to all intents and purposes a pioneer in the vending sector in Italy and was also the first Italian company which merged with a Spac. IVS in fact landed in Piazza Affari in the spring of 2012, following the business combination with Spac Italy 1 Investments sa, the first investment vehicle of this type listed in Italy (see the press release of the time here). In January 2011, Spac had raised 150 million euros from investors and was promoted by managers Vito Gamberale, Carlo Mammola, Gianni Revoltella, Roland Berger, Florian Lahmstein and Gero Wendenburg (see the press release at the time).

At the time of the business combination, in March 2012, IVS was wholly owned by IVS Partecipazioni, in turn owned by the group’s managers, none of whom held a controlling interest. As a result of the merger, IVS Partecipazioni had remained the majority shareholder of the combined entity. For the purposes of the business combination, IVS had been valued at approximately 220 million euros, based on the 2011 financial statements which indicated revenues of approximately 280 millions, an ebitda of 60 millions and a net financial debt of 241 millions. A minority of Spac shareholders had exercised the withdrawal right at the time, with the Spac having therefore repurchased the shares for a total value of 31.72 million euros. So fresh capital worth around 118 million euros gross arrived to IVS thanks to the business combination (114 millions net, see here the 2012 Financial Statements), which had served to finance a series of acquisitions. Subsequently IVS’s m&a campaign continued, supported by a series of bond issues. In total, since the listing in 2012 and until last June, the group has conducted over 125 acquisitions for a total of over 210 million euros invested (see here the presentation of the H1 2021 data).

Among the latest acquisitions, we recall that IVS Group in April acquired 70% of the share capital of IVS H24 srl, a company set up by DAI 24 srl through the transfer of the business unit that carries out the H24 vending activity  (see the press release here). DAI 24 operates in the Genoa area with a network of 11 automatic shops and a turnover under normal conditions of more than one million euros. Among the latest most significant acquisitions, we would also like to recall that in September 2019 IVS took over from Nexi Payments, a company of Milan-listed Nexi Group, the majority of Moneynet spa, a company specializing in the provision of paid services (see here a previous article by BeBeez).

As for bond issues, in October 2019 IVS listed on the MOT a 300 million euro bond maturing October 18, 2026 with a 3% coupon (see here a previous article by BeBeez), the proceeds of which were used to repay the 240 million euros bond with a 4.5% coupon issued in November 2015 with maturity 2022, which in turn had refinanced the previous issues under more favorable conditions, i.e. the 200 millions bond maturing in 2020 paying a 7.125% coupon issued in March 2013, then expanded by another 50 millions in March 2014 (see here a previous article by BeBeez).

Finally, we recall that last February IVS Group also signed a memorandum of understanding with Enel X Financial Services and PayTipper, of a non-binding nature for the parties, aimed at developing various collaboration agreements in the field of payment services and systems (see here the press release).