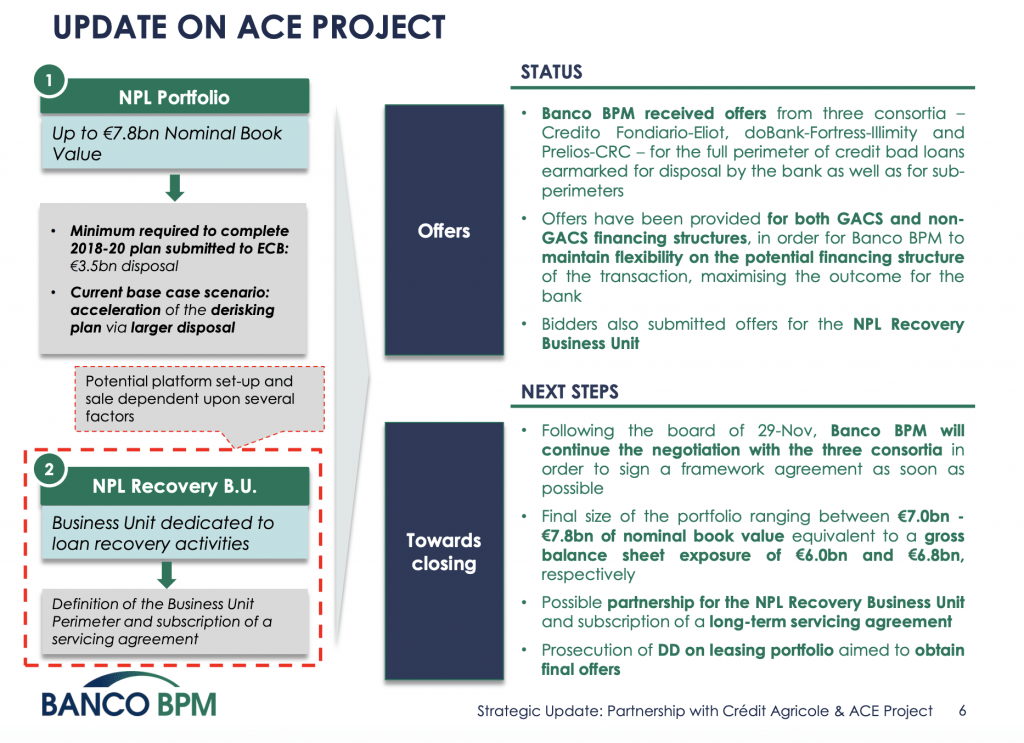 Banco Bpm agreed to sell to  Credito Fondiario and Elliott Management a bad loans portfolio of a size in a range between 7 and 7.8 billion euros GVB and a 70% stake in its non-performing exposures management platform (see here the press release).

The final closing of the deal is subject to SUperivion Authorities authorization and is expected to happen by the first half of 2019. Credito Fondiario was advised for the deal by  Goldman Sachs International (financial advisor), PwC Deals FS (industrial advisor) and Gatti Pavesi Bianchi and  Gianni, Origoni, Grippo, Cappelli & Partners law firms.

The consortium finally won an auction that attracted a lot of interest from all major players in the market since last Spring when Banco Bpm’s ceo Giuseppe Castagna swas still evaluating whether selling just a smaller bad loans portfolio for about 3.5 billion euros GBV or both a portfolio and part of all the NPE management platform (see here a previous post by BeBeez). As the bank itself confirmed in a Strategic Update published some days ago, bidders having reached the last step of the auction were alsoother two consortia or doBank-Fortress-Illimity and Prelios-CRC.

More in detail, the so-called ACE Project will include two steps:
1)  the acquisition by Elliott of ABS junior and mezzanine notes coming from the securitization of a 7-7.8 bn euros GBV bad loans portfolio while senior notes will be structured in order to be ready for the pubilc guarantee (GACS); Credito Fondiario will act as master servicer and corporate servicer of the securitization;
2) a joint venture between Credito Fondiario and Banco Bpm aimed at the creation of a bad loan servicing platform and the signing of a ten years’ servicing agreement;  Credito Fondiario will also buy a 70% stake of the platform and Banco Bpm will retain a 30% stake; the platform will manage as a servicer the bad loans portfolio that Elliot will have bought, the residual NPE stock on Banco Bpm’s books and the 80% of all new NPE flows for the next 10 years. 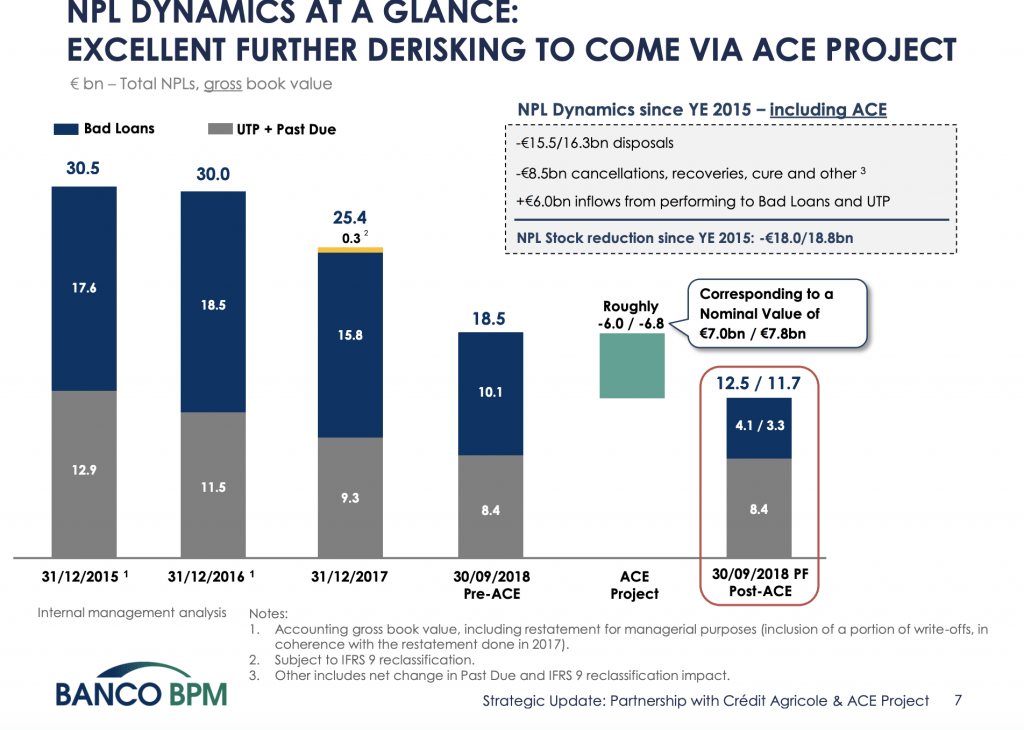 In order to finance all those activities, Credito Fondiario will complete a new capital increase, subscribed by its major shareholder Elliot, by the other shareholders and by the management.

At the end of last October Credito Fondiario announced that Elliott Management would have subscribed a 65 million euros capital increase  as already agreed last May between Elliot, Tages Holding and the other shareholders (see here a previous post by BeBeez). Following that capital increase, Elliot raised its stake from  40% to 69.48%  but ot was stated already that Elliot might have raised its stake in the next future till 81.63%.