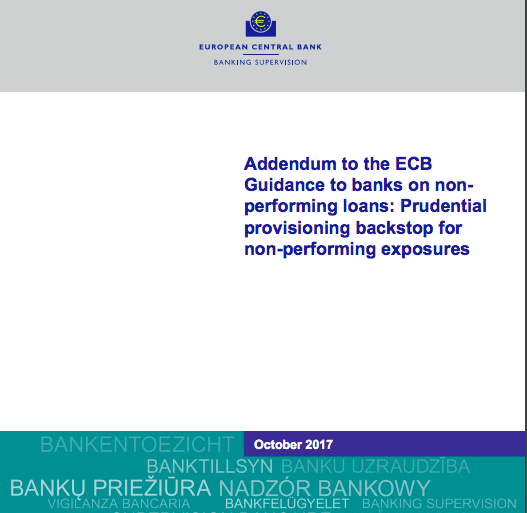 It was a bad day yesterday for Italian banks at the Milan Stock Exchange as their stock prices dropped by 2.3% on average versus a -1.2% of the European banks index. More in detail Banco Bpm lost a 5.3%, Ubi Banca a 3.8% and Bper almost a 3%. This was after the Ecb published for consultation an addendum to its guidance to banks on nonperforming loans: prudential provisioning backstop for non-performing exposure. Ecb guidance on Npl was published previously last March..

The prudential provisioning expectations will apply to all exposures that are newly classified as non-performing in line with the Eba definition as of 1 January 2018 and proposes a 100% coverage (see here the press release). The public consultation started yesterday and will finish next December 8th, while a public hearing will be held on November 30th.

More in detail, the prudential provisioning expectations take into account the length of time a loan has been non-performing and the extent and valuation of collateral. More specifically, banks are expected to provide full coverage for the unsecured portion of new NPLs after 2 years at the latest and for the secured portion after 7 years at the latest. Furthermore, banks are expected to explain any deviation from the guidance to supervisors.

Somebody on the market thinks that some banks might decide before year 2017 ends to re-classify as non perfoming loans some loans which at the moment are still performing but might become non performing soon, so to avoid to cover them 100% next year. Moreover it is reasonable to think that unsecured loans are going to have a higher cost for SMEs.