Gacs, from 2016 till now Italian banks securitized 63 bn euros of bad loans. Senior tranches yield 0.8% on average, while mezzanine give a quite richer 7% 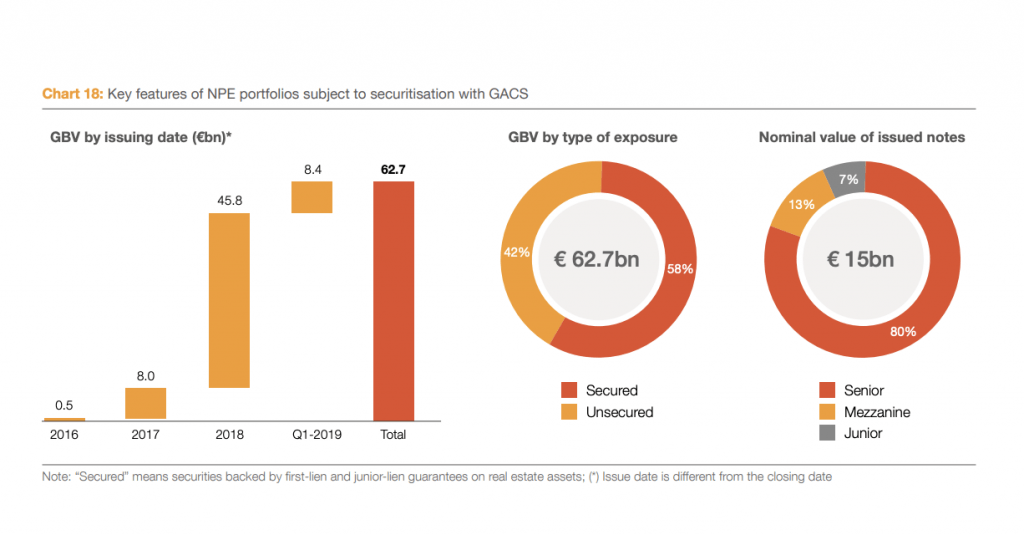 From the start of the Gacs regime (Italy’s Government guarantee on the securitization of non-performing loans) in 2016 to last March, bad loans had been securitized by Italian banks for a total gross value of 62.7 billion euro, equal to over 35% of the totale value of transactions on impaired loans closed in the period, PwC calculated in its latest study on the sector, “The Italian Npl Market. Assembling the Puzzle “.
PwC has mapped 21 transactions whose underlying have been portfolios of non-performing loans for an average of 58% secured loans. Also on average, senior notes were issued for a value of 19% of the gross value of the portfolio, mezzanine notes for 3% and junior notes for 2%. Finally, the weighted average yield of senior notes was 0.8%, while the average yield on mezzanine tranches was 7%, with a maximum of 8% for the mezzanine tranche of the securitization of MPS (Siena NPL 2018) and with peaks of 7.7% for those of the securitizations of Banco Desio and Brianza (2Worlds), BPER (4Mori Sardegna), Bnl (Juno 1 and Juno 2) and Banco Bpm (Leviticus). The lowest yield among the mezzanine tranches (4.8%) was ticked by Unicredit for the FINO 1 securitization, which however is the one that saw the highest return for its senior tranche (1.2%). 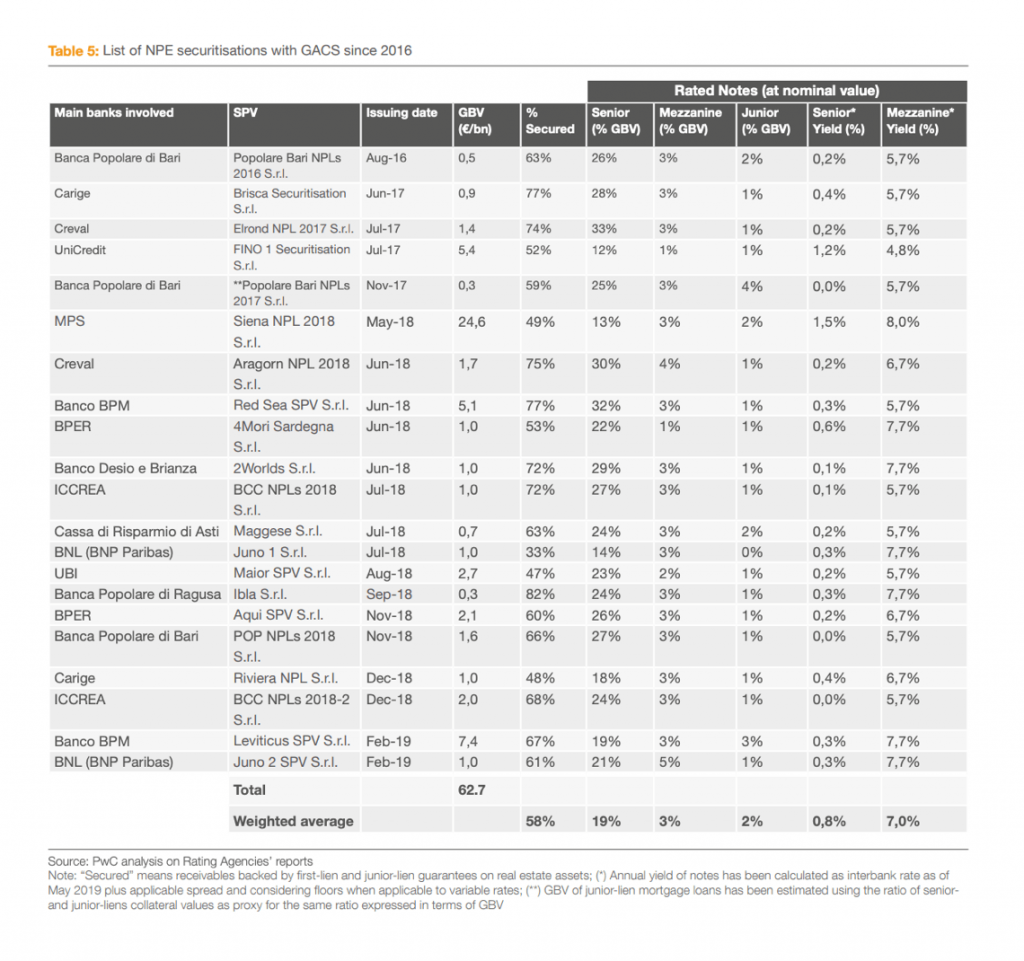 For the rest PwC has confirmed numbers already anticipated last May in an update on the UTP market (see here a previous post by BeBeez). In detail, NPE volumes fell from the record value of 341 billion euros at the end of 2015 to 180 billion at the end of 2018, of which 79 billion were Utp (from 127 billion in 2015). The net value of those gross 79 million of Utp on the books of the banks is 51 billion euros, compared to 97 billion euros gross of bad debts, which on banks’ balance sheets net of adjustments are worth less, that is only 33 billion.
“Following the acceleration of the deleverage process, market and supervisor pressure remains high. In particular, attention to Utp exposures has increased and the share of transactions made on the secondary market is expected to increase: for this 2019 we expect, on the whole, a market of around 50 billion euros gross. In this market and regulatory context, traditional banks, challenger banks and servicers will necessarily be driven to review their strategies and business models, thus contributing to definitively composing the ‘Npl puzzle’, explained Pier Paolo Masenza, Financial Services Leader of PwC.
In mid-May, the Italian market for non-performing loans deals had already reached 15 billion euros from the beginning of January and operations are on the way for another over 36 billion. The figure emerges from the BeBeez Npl Report May 2019 (for subscribers to BeBeez News Premium, discover here how to subscribe for just 20 euros per month) and follows the 101 billion euros of gross value of operations announced in 2018 (see here the Report Npl 2018 by BeBeez).