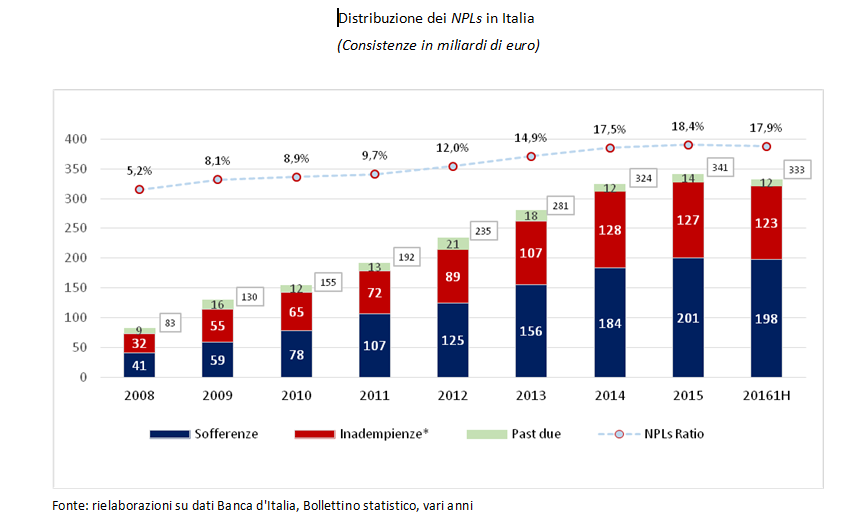 On June 30th the Italian banks were burdened by  198 million euros of groos book value of bad loans, by 123 millions of unlikely-to-pay loans and by 12 millions of past due loans all resulting in a 17.9% NPE ratio dowb from Dec 31st 2015 when the NPE ratio was 18.4%. Figures have been calculated on Bank of Italy data by Sda Bocconi and Duke&Kay, an international advisory company focused on business turnaround who also calculated that the coverage ratio of bas loans was up at 58% last June from 56% at the end of 2015, for a total of 84 billion euros in net bad loans (from 89 billions in 2015).

The downtrend in net bad loans however does not seem to follow in Q3 2016 as figures in interim results statements by the 8 major banking groups in Italy show a slight increase, MF Milano Finanza wrote last Saturday.

In the 12 months at the end of Sep 2016, Montepaschi group  ha recorded a 1.43 billion euros increase, or a 10.9% increase, in net bad loans at 10.9 billion euros. The same trend show the two banking groups of which the Atalnte fund had bought control before Summer: Veneto Banca (in the 12 months at the end of June, as data for Q3 are not available) shows a 9.8% increase in net bas loans value and Banca Popolare Vicenza a 5.7% increase. But other major groups show an upward trend in net bad loans.

The good news is on that the unlikely-to-pay stock and dast due stock have been reducing so that the total net non performing exposure for the major Italian banks is decreasing, Mps included (-7.6% in 12 months at 22.47 billion euros), even if net NPE ratio is still rather high at 21.5%. Which is still better than Popolare Vicenza’s net NPE ratio of 22.2% at the end of June or Veneto Banca’s 23.5%. 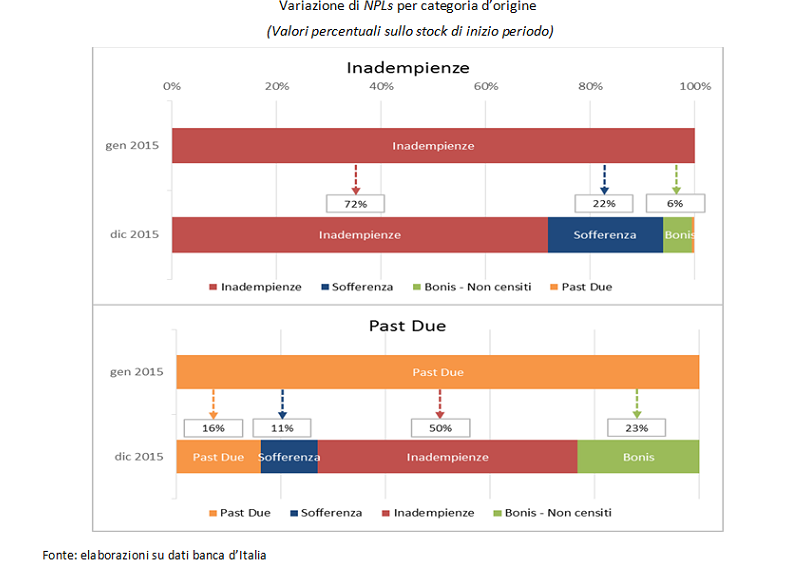 All that said, it is still true that a good portion of gross unlikely-to-pay loans becomes bad loans in one year’s time (22% in 2015) and that a bigger portion of gross past due loans becomes unlinely-to-pay loans in the same period (50% in 2015) or bad loans (11%), Duke& Kay and Sda Bocconi say. All that meaning that Italian banks have to work hard on those assets in order to avoid their transformation in bad loans.

And this is crucial also due to the new international supervision rules coming into effect in the next few years as they are going to make unlikely-to-pay and past due loans heavier of banks’ books (see the application of the new international accounting standard Ifrs9 or the new definition of default by the European Banking Association).

“More than 70% of gross non perfomring exposure on Italian banks’ books is versus non financial companies”,  Duke&Kay Italia’s managing partner Maurizio Ria told Milano Finanzas, adding that “a bank shoould wonder which of those companies is still possibile to save and relaunch, keeping in mind the economic and social negative impact of a company shut down as well as the negative impact on the bank activity in the specific local area”.

So the bottom line, say Mr. Ria, is that Italian banks should consider to select SMEs loans non perfoming portfolios and not just selling all non performing SMEs loans to distressed credit funds focusing on Npl, as their approach is just recovering their credit by selling guarantees.

Selling those loans to turnaround fund or working with them to a relaunch plan might instead be a better choice as a relaunch of the business might brign the company back to be able to repay its debts completely. Howvere, Mr. Ria added, “all that means that a company should be restructured from an industrial point of view. Financials are crucial but cannot be the only focus in a restrucutinrg process even this misleading approach has been implemented quite often in Italy”.

Mr. Ria said that “a joint research by Sda Bocconi’s PE Lab, Bank of Italy, Cerved and Duke&Kay showed that unlikely-to-pay loans (including debt restructuring agreements) generated write-offs for about 25% of their gross value on Italian banks’ books while bad loans (including banckrupty procedures) generated write-offs for about 60% of face value. This means that Italian banks try to sell their loans at prices close to their net book value which is 70-75% for unlikely-to-pay loans and 40-45% for bad loans”, which are figures that hardly meet international funds’ bids as “funds expect a 15-25% Irr from their investments in non perfoming exposures”.

That is why an alternative way to approach the problem is working together with those funds as the bank might freeze its credit for some years allowing the fund to realunch the company by injecting new money and restructuring the business so that at the end of the job the comapny might be able again to repay its debts, maybe all of them.

Francesco Trapani acquires a 9% stake in Tages Holding. A new private equity player might be on its way