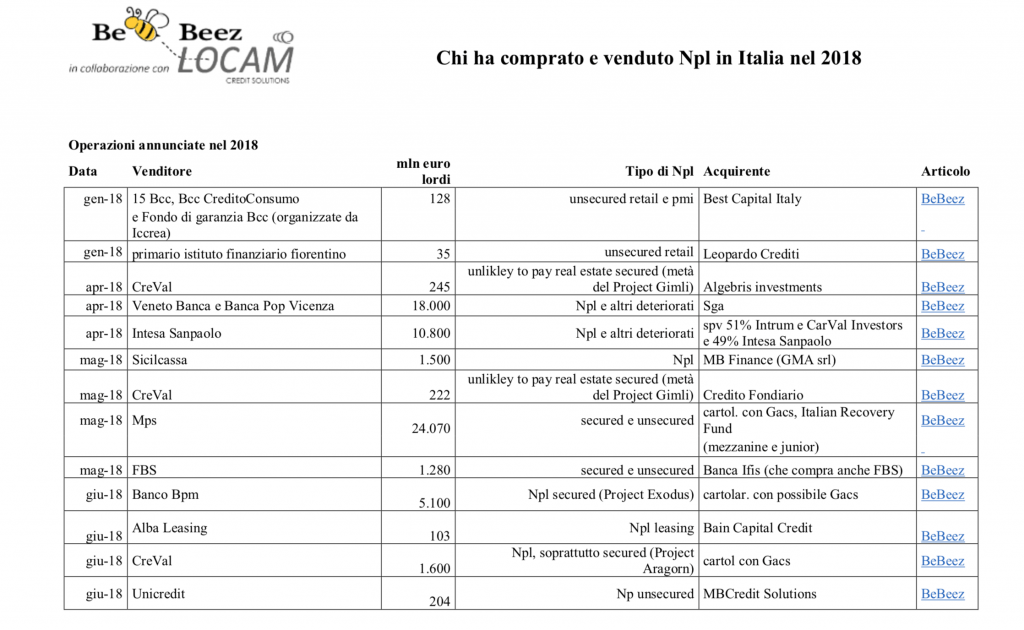 Market participants keep robust the deal flow for NPLs and private debt. According to BeBeez database, the gross value of announced sales of problematic credits is of 67 billion of euros (see here a previous post by BeBeez). However, such figure could increase by a further 38 billion by the end of 2018.

Värde Partners, Barclays investment bank and Guber Banca acquired from 53 Italian co-operative banks a portfolio of gross secured (39%) and unsecured (61%) NPLs  worth 1.397 billion of euros  (see here a previous post by BeBeez).  Gruppo Cassa Centrale Banca, the company that groups the Italian co-operative banks, carried on the single tranche securitisation of this portfolio through its subsidiary Centrale Credit & Real Estate Solutions which in turn created Futura Spv. Värde Partners is the majority shareholder of the company that acquired this portfolio and received financing support from Barclays Bank, Guber Banca has the role of servicer and sub-servicer and will hold a minority of the buying firm. Guber belongs to founders Francesco Guarneri andGianluigi Bertini (66.7%) and to US financial firm  Varde Partners (33.3%).

Banco Bpm set 11 Julyth as the deadline for tabling bids for Project Ace, a portfolio of problematic credits worth 3.5 billion of euro, and for a stake in the platform that manages NPLs  (see here a previous post by BeBeez). Press reports said that the bank may sell the whole amount of NPLs worth 10 billions that are still on its account and 100% of the platform for an interesting offer. The list of potential buyers includes Pimco-Phoenix Investment Partners, joint bidders Tpg Capital-Davidson Kempner Capital Management-Prelios, Varde Partners-Guber Banca, Cerberus Capital Management, Credito Fondiario, Elliott Management Corporation, and doBank –Fortress Investment Group.

Cerberus Capital Management acquired 57% of Officine CST, a Rome-based servicer for credits towards the public administration, from the ceo Gianpiero Oddone and other shareholders (see here a previous post by BeBeez). Oddone will keep 28% of the firm, while Roberto Nicastro, senior advisor of Cerberus, will act as non executive chairman. Officine CST handles credits for 16 billion of euros.

Iccrea Banca completed the first European rated multi-originator securitisation of NPLs on a portfolio worth a gross amount of 1 billion of euros  (see here a previous post by BeBeez). Iccrea Banca, which sold such NPLs together with 21 co-operative banks (BCCs), also applied for the Gacs, a warranty of the Italian Government. The portfolio was sold for a price worth 31% of the nominal value.The BCCs which took part to this transaction sold 18% of their NPLs through a special purpose vehicle that sold three kinds of securities: senior, with a Baa3/BBB- rating (Moody’s, Scope)  for 282 million and eligible for Gacs, paying a coupon of Euribor 6 months plus a 40 bps spread (the originator banks subscribed this tranche); a mezzanine, with Caa2 and B+ rating, for 31.4 million, paying a coupon of Euribor 6m + 6%; junior, unrated, of 10.5 million. An institutional investor acquired the mezzanine and junior tranches

The regional financial sponsor Fondo Strategico Trentino Alto-Adige, part of Finint Investments, subscribed the minibonds that  and Dolomiti Fruits issued (see here a previous post by BeBeez). Niederstätter sells and rents machinery for the construction industry and issued a minibond of 2 million of euros with a tenure of 6 and a half years. The company has sales of 26 million and will invest the proceeds of such issuance in the organic development and eventual acquisitions. Dolomiti Fruits, a food company, issued a 3 million bond due to mature in 6 and a half years. The firm generates abroad 71% of its 23 million of sales and will invest the proceeds of this issuance for building a further production plant.

AC Milan owner Yonghong Li, a Chinese businessman, couldn’t sell the majority of the iconic Italian football club to Russian investors (see here a previous post by BeBeez). According to market rumours, Dmitri Robolovlev, owner of Ligue 1 club Monaco, and Alisher Usmanov, minority shareholder of Premier League’s Arsenal, were part of the pool of potential buyers of AC Milan. US hedge fund Elliott became the owner of AC Milan as Li didn’t pay back to the firm a 32 million euro loan that the fund issued to allow him pay a tranche of 32 million of euros of a capital increase. The original debt of the Italian team was of 303 million but now is almost about 400 millions, including the new loan and PIK interests. Elliott will appoint new board members and could launch a capital increase of 150 million. Gordon Singer, the son of Elliott’s founder Paul Singer, will handle the sale of AC Milan, which attracted interest from Thomas Ricketts, the owner of baseball team Chicago Cubs, and Rocco Commisso, the Italian American owner of Mediacom. AC Milan will try to appeal before Tas Court which banned the team from the European competitions for having breached the Uefa’s rules on financial fair play.

La Scuola, an Italian publishing companies, acquired SEI-Società Editrice Internazionale (see here a previous post by BeBeez). After such an acquisition, La Scuola will have revenues of 30 million of euros and an ebitda in the region of 3 million. SEI has a net cash flow of 6 million and an enterprise value of 16 million that La Scuola paid with 10 million in equity and through the issuance of a 6 million minibond due to mature in 2022. The private debt arm of Tenax Capital subscribed the bond.

Italy’s listed financial firm Gruppo Azimut launched Azimut Private Debt, an initiative for retail and institutional investors (see here a previous post by BeBeez). The fund will have a life of ten years and will require a minimum subscription of  25k euros. P&G sgr, DeA Capital Alternative Funds sgr, and Green Arrow Capital sgr will support Azimut for the management of the fund which will invest in credit instruments or securitisations up to 70% of its resources. Paolo Martini, the ceo of Gruppo Azimut, said that the new fund would provide investors with an opportunity for diversifying their portfolios and achieve yields.

Piazza Italia, an Italian fashion retailer, issued a minibond of 3 million of euros with a 6 years maturity that Unicredit subscribed (see here a previous post by BeBeez). Earlier in April, the company issued a 12 million minibond due to mature in 2024. Piazza Italia has revenues of 408 million and will invest the proceeds of this issuance in developing its bus. Francesco Bernardo, the company’s cfo, said that he could consider further issuances.

Sintexcal, an Italian producer of chemical products for raods flooring which is part of Italian construction company Gruppo Tonon, issued a short-term minibond for one million of euros (See here a previous post by BeBeez). The liability will mature in July 2019 and pay a 4% coupon. Rete Fidi Liguria is one of the subscribers of the bonds. Sintexcal has revenues of 45.2 million and net profits of 0.71 million. Gruppo Tonon has sales of 263 million with net profits of 4 million.

Njord Partners said to be close to take control of Aerdorica, the Marche Region airport manager