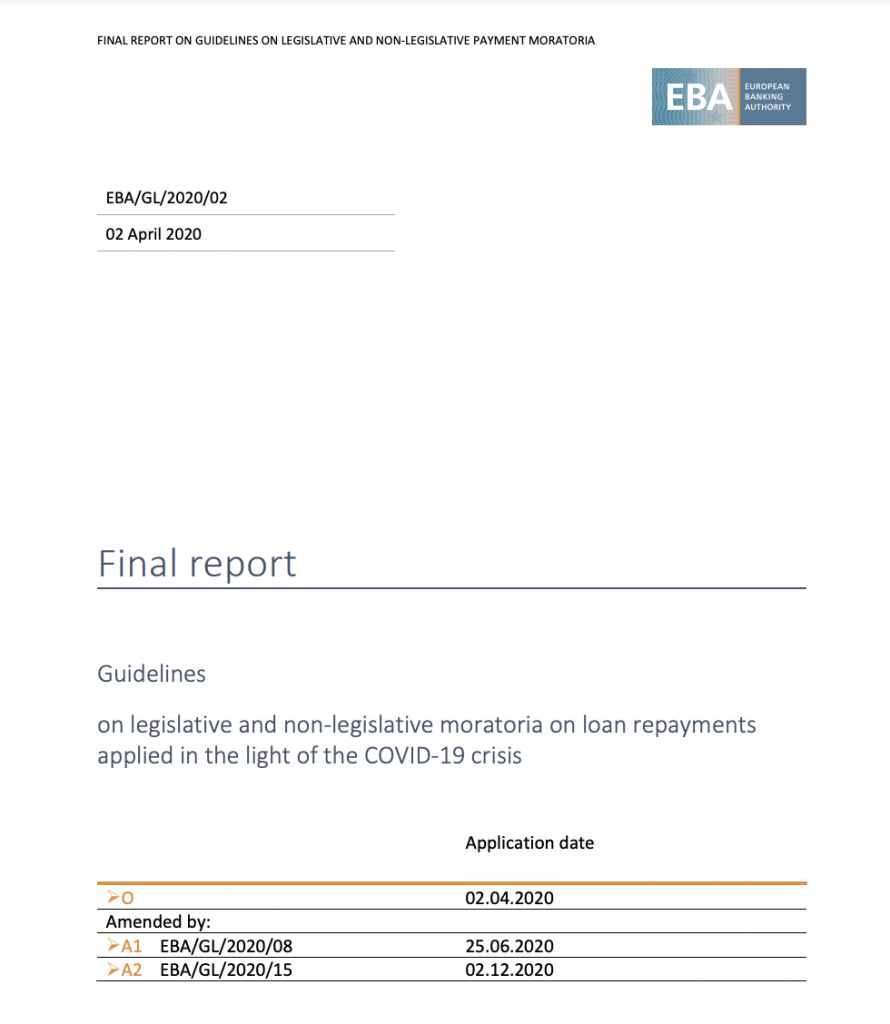 The European Banking Association (EBA) extended to 31 March the guidelines on loans with moratorium that expired on 30 September (see here a previous post by BeBeez). EBA made such a decision in light of the COVID-19 turmoil.

On 30 November, Monday, GHOS (Group of Central Bank Governors and Heads of Supervision), the surveillance unit of Basel Committee, released a statement for requiring an international coordination for facing the impact of the coronavirus turmoil on the global banking system (see here a previous post by BeBeez).  The GHOS asked to avoid regulatory clashes and changed the Capital treatment of securitisations of non-performing loans for easing the sale of portfolios of distressed credits.

Assifact said that the European directories for defaults that should be accepted by 2021 could have a devastating impact on factoring credits (see here a previous post by BeBeez). At the end of 2019 factoring credits amounted to 255 billion euros or 14% of Italian GDP

Amco formally bought NPEs and other assets and liabilities from Montepaschi as expected last December 1st (see here a previous post by BeBeez and here the press release by MPS). Amco bought distressed credits for 8.1 billion euros that are part of the Hydra portfolio and other assets from the bank. The bank must sell such distressed credits for allowing the Italian Treasure Ministry to sell its 68.274% stake acquired in 2017.

Iccrea Banca carried on a 2.4 billion euros worth securitization of NPLs for which doValue will act as special and master servicer (see here a previous post by BeBeez). This securitization will have a GACS warranty and will involve 90 banks, of which 88 belong to Gruppo Bancario Cooperativo Iccrea (84 Bcc, Iccrea Banca, Iccrea BancaImpresa, Banca Sviluppo, and Banca Mediocredito del Friuli Venezia Giulia). Moody’s assigned a Baa2 and a Caa2 rating for the senior notes. Scope assigned a BBB and CC rating for the senior and mezzanine notes.

Credito Fondiario is acting as master and special servicer for the securitization of a portfolio of secured NPLS with a gross face value of 1.67 billion euros which had been previously securitzed in a 2007 deal (see here a previous post by BeBeez). Credito Fondiario will also act as Corporate Servicer, Calculation Agent and Paying Agent.

P&G, an asset manager focused on structured credit,  launched P&G UTP Management Fund and acquired a UTP SMEs corporate portfolio worth 35 million euros GBV for 19.3 million euros from banks (see here a previous post by BeBeez). Earlier in January, P&G launched a vehicle for NPLs after it acquired portfolios with a face value of 50 million. P&G is to invest in the invoice financing sector.

Banca Ifis closed the acquisition of a 70.77% of Farbanca and called off its partnership with IBL Banca for the NPLs recovery through the issuance of loans with the assignment of a fifth of the salary as collateral (See here a previous post by BeBeez). Banca Popolare di Vicenza sold Farbanca for 32.52 million euros, while small shareholders will hold 29.23% of the firm.

Intesa Sanpaolo is said to be negotiating again with Intrum the strategic alliance signed in 2018 for managing the Npls (see here a previous post by BeBeez). Intrum Italy has a net debt of 4.8 billion euros with an ebitda of 308 million. Intesa could have taken such a decision as Davidson Kemper reportedly put up for sale Prelios. Intesa SanPaolo currently owns 49% of Intrum Italy and take over the whole company.

BeBeez and Leanus held on 25 November, Wednesday, a webinar about receivership procedures in Italy for 2019/2020 (see here a previous post by BeBeez). At the end of August 2020, more than 12,300 Italian companies were going through a procedure of insolvency, receivership or debt restructuring said a report that Leanus produced for BeBeez (see here a previous post by BeBeez). According to BeBeez Private Data (find out here how to subscribe for just 110 euros per month), 75 Italian companies are going through an insolvency procedure or a special situation with the support of turnaround investors. The Insight View of BeBeez of 23 November, Monday, provides a focus on special situations. Yesterday Stefania Peveraro, the Chief Editor of BeBeez and chairwoman of EdiBeez srl, and Alessandro Fischetti, the ceo of Leanus hosted a webinar about the receivership procedures for 2019/2020  and shared the results of the above report (see here a previous post by BeBeez). See here BeBeez Insight View about special situations, available to BeBeez News Premium’s subscribers.

Cerved launched a fintech platform for the trading of distressed credits (also single name) through its subsidiary Cerved Credit Management (see here a previous post by BeBeez). The platform is already active on Markagain a marketplace for the assets that Cerved handles for its servicing activities.

Eugenio de Blasio, the founder and ceo of Green Arrow Capital, said to BeBeez that Green Arrow Private Debt II aims to raise 250 million euros and reach its first closing by June 2021, while the vehicle for investing in infrastructures already raised committments for 100 millions out of a 500-700 millions target (see here a previous post by BeBeez). The new private debt fund aims to focus on mezzanine facilities in support of LBO transactions.

Valtellina, an Italian TMT company issued a 7-years minibond worth 10 million euros that Intesa SanPaolo subscribed as part the Elite Intesa Sanpaolo Basket bond (see here a previous post by BeBeez and here the BeBeez Report about Basket Bonds for July available to BeBeez News Premium‘s subscribers). In December 2019, the company had issued a 12 million minibond that Unicredit subscribed. Valtellina belongs to the eponymous family and has sales of 187.3 million with an ebitda of 18.1 million. The company will invest the raised proceeds for its organic development.

On 30 November, Monday, the basket bond programme of the Regione Puglia closed its second issuance of minibonds worth 18.6 million euros for six companies (see here a previous post by BeBeez). The issuers are Cedat85 (3.2 millions), Gelesis (5 millions), Casa di Cura Petrucciani (2.15 millions), Itel Telecomunicazioni (3.2 millions), Dream Project (2.25 millions), RossoGargano (3 millions). The companies will invest such proceeds in their organic development. Earlier in June, eight companies issued bonds for 33.6 million euros as part of the basket bond programme: Alfrus, Alidaunia, CDSHotels, Cirillo Group, Links Management&Technology, Tersan Puglia, The Digital Box, Upgrading Services. All the minibonds will receive a 25% warranty from Puglia Sviluppo. The bonds will mature in up to 7 years and Unicredit will subscribe them, securitize them and sell the asset backed securities to Cassa Depositi e Prestiti, Mcc (anchor investors) and other institutional investors. Unicredit will buy 5% of the asset backed securities (see here the BeBeez Report about Basket Bonds for July and here the BeBeez Private Debt  Report for 1H20.

Saie, an Italian provider of services for cemeteries, issued a minibond of 8.2 million euros due to mature in December 2025 that RiverRock Italian Hybrid Capital Fund (Ihcf) subscribed (See here a previous post by BeBeez). Medit Partners structured the issuance and acquired a minority of Saie together with the Ballerini Family. Saie has sales of 6.2 million with an ebitda of 1.4 million and will invest such proceeds in its organic development.

Sigla, a consumer credit company that belongs to Alchemy Special Opportunities, made a securitization worth 120 million euros of consumer loans (see here a previous post by BeBeez). Sigla will issue 4 classes of partly paid notes through Civetta spv for this securitization. Sigla previously belonged to Palomon Capital, Dea Capital, the ceo Vieri Bencini, and the managers that acquired the business in 2005 from Riello.

Patrimonio Destinato, according to the draft decree it may also invest in restructuring funds. Here are all the details