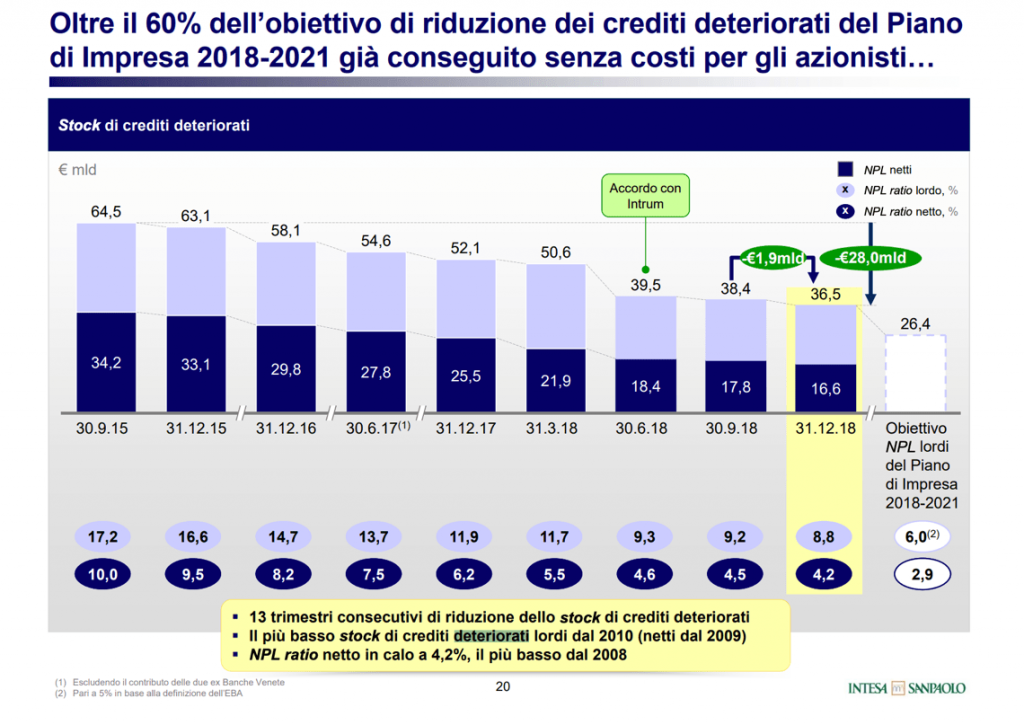 Intesa Sanpaolo signed a non binding agreement with credti servicer Prelios for a portfolio of UTPs loans worth 10 billion euros (see here a previous post by BeBeez). Intesa ceo Carlo Messina, aims to reduce to 6% its gross NPE ratio by the end of 2021. The listed Italian bank has UTPs for 14.3 billion. TMA, the Italian association of turnaround managers released its March newsletter focusing this month on what Italian banks are doing with their UTPs (see here a previous post by BeBeez). The newsletter is edited by BeBeez and another focus is about the non performing shipping sector. this latter focus has been anticipated by BeBeez in an Insight view to its BeBeez News Premium 12 months readers some weeks ago (find out here how to subscribe to BeBeez News Premium for just 20 euros per month ).

Illimity, the listed Italian investor in distressed credits, lent 85 million euros to a fund and a trade buyer for portfolios of UTPs and NPLs with a face value of 600 million (see here a previous post by BeBeez). Andrea Clamer is the head of the Npl Investment & Servicing division of Illimity, while Corrado Passera is the company’s ceo.

Gerardo Cesari, an Italian iconic wine producer that is part of  Caviro Group, borrowed 20 million euros from Banco Bpm see here a previous post by BeBeez). The company received a credit line of 12 million with a 12 years tenure for financing a development project and 8 million euros with 5 years tenure for an inventory loan. Carla Telenia Zanon, a senior banker who is part of the origination corporate team of Banco Bpm, spoken about the inventory loans market during a BeBeez event on 10 April 2018 (see here the video of the event). In 2014, Caviro acquired Gerardo Cesari which has sales of 22.8 million and an ebitda of 2 million.

TSW Industries, a producer of industrial machinery for the packaging sector, issued a Milan-listed minibond worth 1.4 million euros (see here a previous post by BeBeez). The company will invest such proceeds in its organic development. The minibond is due to mature on March 2024 and has an amortizing reimbursement structure and pays an annual coupon of 6%. Sella Corporate & Investment Banking acted as financial advisor to the company, while Chiomenti provided legal counsel. TSW has sales of 8.2 million euros, an adjusted ebitda of 1.6 million, and net financial debt of 3.3 million.

Interporto Regionale della Puglia, managing Interporto Bari, and its owner Italfinance, the holding of the Degennaro Family finalised the restructuring of their debt (see here a previous post by BeBeez). Real estate investor Tpg Sixth Street , through a fund managed by Prelios sgr, will acquire Interporto for 41 million euros, while the Degennaro’s will keep an operative role of the infrastructure. Interporto and Italfinance will invest these proceeds for paying its debt of 69.6 million with Mps, Banca Marche, Bpb, and Bpm, and of 4.5 million with the Apulia Region. The companies have also to pay taxes to BariMunicipality and the Italian Inland Revenue.

Charme III sells control of Spain’s Igenomix to EQT. But it will reinvest for 15%. Deal value is more than 400 mln euros