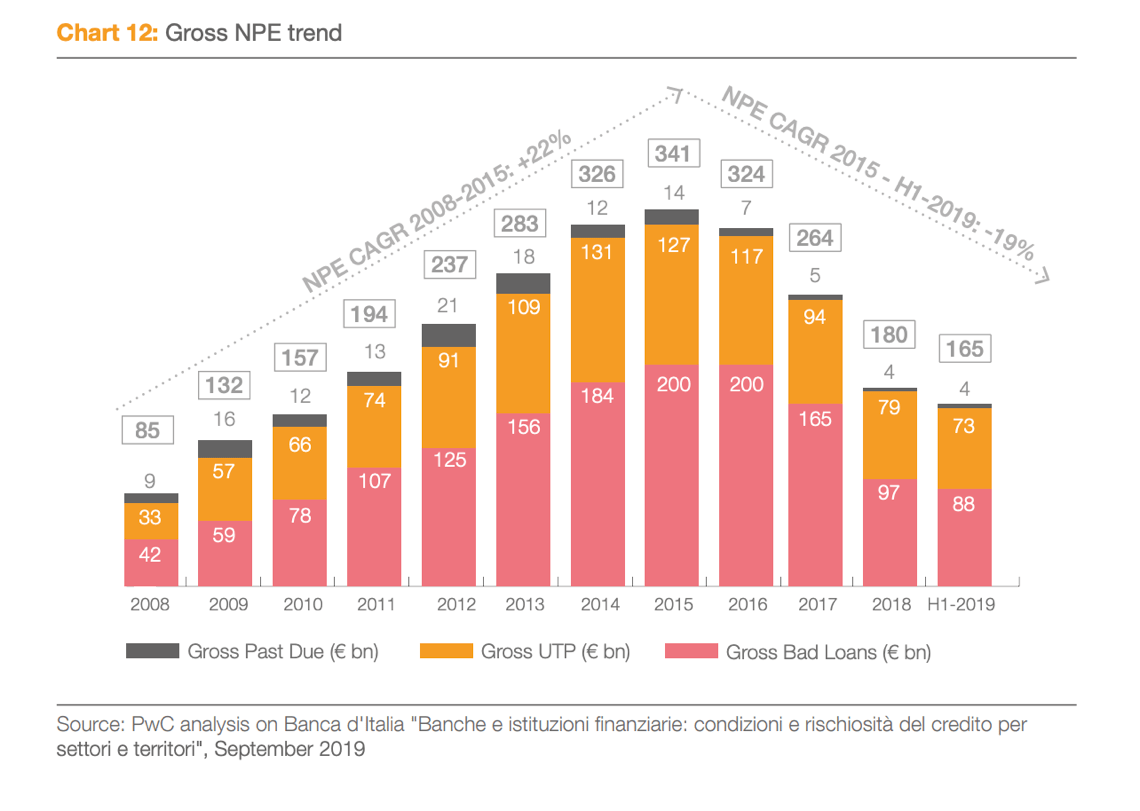 Ubi Banca closed the securitization of a portfolio of NPLs amounting to 857.6 million euros whose senior tranche may get the Gacs warranty (see here a previous post by BeBeez). Iseo spv, the spv securitization vehicle appointed Italfondiario and doValue as master and special servicer for the portfolio. Iseo issued senior investment grade shares for 335 million amounting to 39% of the gross face value with BBB rating from Scope Ratings and DBRS. These shares will pay a coupon of 6 months Euribor plus 50 basis points. Also Mezzanine notes for 25 millions and Junior notes for 13.5 millions were issued. A foreign Institutional investor is ready to buy 95% of mezzanine and junior shares for a 20.8 million loss for the bank. UBI’s for 4Q19 may amount to 8.5% (9.34% in 3Q19).

Cdp and Finlombarda launched the Elite Basket Bond Lombardia, a programme of bond issuances amounting to 100 million euros for supporting the local companies (see here a previous post by BeBeez). B.V. Tech and Montefarmaco OTC carried on the first issuance of 17 million at a fixed rate for a 9 years term.Cdp and Finlombarda are anhor investors of the programme. BV Tech previously issued a 9.8 million bond in December 2016 and another in March 2018 for 12 million.

SisalPay, the payment company of Italian gambling company Sisal, issued a Luxembourg-listed 530 million euros bond (see here a previous post by BeBeez). Sisal belongs to CVC Capital Partners. The company will invest such proceeds in developing a proximity bank with Banca 5 (Gruppo Intesa Sanpaolo). The liability will mature on 17 December 2026 and pay a coupon of euribor 3 months plus 387.5 basis points (0% floor). The bond have a call option with a strike price of 101 expiring on 17 December 2020. SisalPay and Intesa will create a newco of which Sisal Group will hold 70% and Banca 5 30%. Sisal belongs to CVC Capital Partners since May 2016. The company has a turnover of 845 million, an ebitda of 233 million, and net debts of 526 million.

Italtel, part of Milan-listed Exprivia, is going to launch a capital increase as independent auditors found out that the company’s goodwill, the deferred tax assets and other assets pushed the company’s equity below the least legal value (see here a previous post by BeBeez). Italtel is negotiating with banks new financing terms after a debt restructuring agreement signed at the end of 2017. The company has sales of 466 million euros (458.3 million yoy), an ebitda of 26.1 million (14.8 million), a net loss of 4.8 milioni (10.5 million), and a net financial debt of 168.9 million (164.5 million). In December 2017, Exprivia acquired 81% of Italtel for 113.8 million as part of the target’s debt restructuring, Cisco has 19%. Before the debt restructuring agreement, Italtel’s shareholders were Clayton, Dubilier & Rice (48.77%), Telecom Italia Finance (19.37%),  Cisco (18.40%), Capita Trustees Limited (10.81%), and Cordusio Fiduciaria (2.65%).

Coima extended to 7 years and an amount of 900 million euros for financing the Milan real estate development projects Porta Nuova Garibaldi and Porta Nuova Varesine (see here a previous post by BeBeez). Unicredit, Intesa Sanpaolo, BNP, Banco BPM, ING, Société Générale, and Crédit Agricole acted as lenders. The debt for Porta Nuova project amounts to 40% of the assets. After such an extension and a review of the financing terms, Coima will save 10% for financial costs.

Scame Parre, a producer of components for electric systems, issued a minibond of 4 million euros that Unicredit subscribed (See here a previous post by BeBeez). The bond matures in 5 years and pays a quarterly coupon linked to the euribor rate. Scame Parre will invest the proceeds in its organic development and has sales of 130 million.

Iccrea BancaImpresa issued a 10 million euros financing to Consorzio Caseifici Cooperativi (See here a previous post by BeBeez). The consortium has sales of 160 million euros and aim to support its international expansion, said Consorzio Caseifici chairman Paolo Carrà. The company will invest these resources in acquiring 32,000 forms of Parmigiano Reggiano (20%) and of Grana Padano (80%) cheese. The company has sales of 160 million.

Bianalisi, an Italian diagnostic company, received 65 million euros from Banca Ifis, Banca Sella, and the direct lending fund Springrowth (See here a previous post by BeBeez). In July 2018, Bianalisi received 35 million from Banca Ifis, Bnl Gruppo Bnp Paribas, Banca Popolare di Milano, and Crédit Agricole Italia. Bianalisi has sales of 33.5 million, an ebitda of 6.3 million. The company will invest these resources in the consolidation of the acquired companies. Springrowth raised 210 million euros and since October 2018 it belongs to Muzinich&Co

Ireos, an Italian utility, issued Milan-listed minibonds worth 100k euros each with a 4.5% coupon and maturity on December 2020 (See here a previous post by BeBeez). Such issuances are part of a 3 million programme. The bond may issue bonds of up to one million each. At the end of 2017, Ireos issued Milan-listed minibonds that matured in July 2018 and paying a 3.8% coupon. In August 2017 the company issued a minibond that matured in August 2018 with a 4% coupon, while in March 2017 it issued a bond with a 4.2% coupon that matured in November of the same year. The company has sales of  23.4 million and will invest the issuance proceeds in strengthening its working capital.

Italian carpentry company 2M issued Milan-listed short term minibods worth 250k euros (see here a previous post by BeBeez). The bonds will mature in December 2020 and pay a 4% coupon. The company will invest such proceeds in refinancing the 0.1 million liabilities due to mature on 19 December 2019 with a 4.2% coupon. 2M plans to issue short-term minibond for a total value of 1.5 million. 2M has sales of 8.5 million, an ebitda of 0.8 million, and a net financial debt of 3.2 million.

Lucaprint Group issued a 750k euros Milan-listed minibond that pays a 4.2% coupon and is due to mature in November 2020 (See here a previous post by BeBeez). This issuance is part of a 3 million programme. Lucaprint has sales of 17.9 million, an ebitda of 2.2 million, and a net financial debt of 4 million and will invest such proceeds in its working capital.

Italian textile company Plissé issued a long-term minibond of 1.5 million euros as part of a debt consolidation strategy (See here a previous post by BeBeez). The company has sales of 24.3 million (+9% yoy), with an adjusted ebitda of 3.2 million. Cerved rated the company with a B1.2 score. Plissè aims to diversify its financing sources with mid/long term banking loand and alternative finance instruments and less instruments of short-term financing. The company’s debt may stand at 10 million with positive effects on the working capital.

Naples-based dressmaking firm Isaia e Isaia (Iei) listed two minibonds on Milan market (see here a previous post by BeBeez). The liabilites are worth 7.5 million euros each, one has a 4.5% coupon and is due to mature on 1 January 2027. The other pays a 5.2% and is due to mature on 1 July 2027. Iei issued two Milan-listed minibonds in July 2015 for a total of 7.5 million. Anthilia Capital Partners subscribed 90% of the issuance, while Banca Popolare di Bari subscribed 10%. In early 2018, Iei reimbursed the bonds in advance. Iei has sales of 61.6 million, an ebitda of 9.1 million and a net financial debt of 36.1 million.

Asja Ambiente Italia, a renewable energy company, issued two Milan-listed green bonds (see here a previous post by BeBeez). One bond is due to mature in October 2024 and pays a 5.2% coupon and amounts to up to one million euros. The other liability is due to mature in June 2027, pays a 5.75% coupon and is worth up to 20 million. Asja Ambiente may issue further 2027 bonds for 14 million by 1 July 2021, while next year might issue new bonds maturing in September 2024 for a maximum of 5 million euros more (see here a previous article by BeBeez). Bonds maturing in 2027 have been already subscribed for 20.5 million euros by Anthilia BIT 3 fund (10 millions), Finint Investments sgr (8 millions), Consultinvest Asset Management sgr spa (2 millions) and Confidi Systema! (500k euros), while the Oct 2024 bond was subscribed by Banca Popolare di Ragusa.

Gruppo Horsa, a B2B IT consultancy firm for Italian midmarket companies, issued the first senior unsecured tranche of a 3 million euros di minibond due to mature in 7 years (see here a previous post by BeBeez). The bond has an amortizing structure and pays a 3.6% coupon. Mario Bottero, partner head of corporate finance of ADB – Corporate Advisory, said to BeBeez that the minibond is a ready-cash bond which means that i nvestors agreed to lend 6 million but will initially pour just 3 millions, while the remaining 3 millions will remain available as a facility. Horsa will therefore save passive interest costs. Iccrea BancaImpresa made available the further 3 millions for the second tranche of the bond while Horsa may increase the outstanding to up to 10 million. Horsa has sales of 100 million, an ebitda of 7.2 million, and net profits of 2.4 million. In July 2018, Horsa acquired CST Consulting. The target’s founders reinvested in the new company.

Investindustrial strikes a 3.75 bn euros fundraising for its VII fund