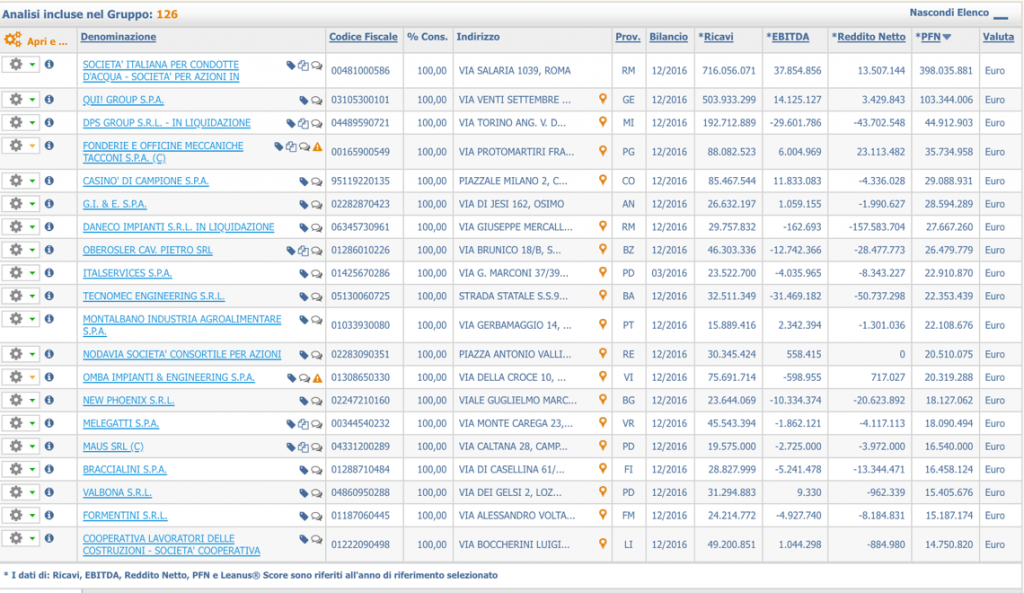 In 2018, 126 Italian companies generating at least one million of euros in sales ended their activities or applied for bankruptcy and receivership, Leanus data say (see here a previous post by BeBeez). These companies generated aggregated sales in the region of 5.3 billion in 2016 (-4.37% compared to 2015) an ebitda margin of minus 2.28% (0.52%), average sales of 42.1 million (45.1 million). The lit of these companies includes Condotte, QuiGroup!, DPS Group (Trony), Fonderie e Officine Meccaniche Tacconi, Casinò di Campione, Melegatti, Braccialini, Conte of Florence, Malo. The aggregate data (so without acces to single names) are available here for those who sign up for free and type in Crisi, società in procedura o fallite (BeBeez) in the research window and choose the latest version. To access single names, please upgrade to Leanus Premium, after having registred for free here.

The shares of Italian textile group Stefanel climbed after the announcement of 11 January that Treviso Court set 15 April 2019 deadline for presenting a receivership proposal and a restructuring plan (see here a previous post by BeBeez). The Court appointed as commissioner for the company Dino Biasotto, Danilo Galletti, and Pier Giorgio Cecchini. In 3Q18, Stefanel posted losses of 20.9 million of euros and an equity value of 7.5 million (13.2 million yoy). The company will hold a shareholders meeting on 15 and 16 January and will appoint a new ceo as Cristiano Portas resigned in July 2018. In October 2017, turnaround investors Attestor and Oxy acquired 71% of the company, while Giuseppe Stefanel kept a minority.

Industria Vetraria Valdarnese, a Tuscan cooperative producer of artisanal glass, successfully applied for restructuring its financial debt of 4.7 million of euros (see here a previous post by BeBeez). The total amount of the company’s receivership debt is of 10.7 million. MPS, Banca del Valdarno, CFI, Deutsche Bank, Iccrea, Banca di Cambiano, Coopfond, UBI, Unipol, and CRF (part of Intesa Sanpaolo), signed the restructuring agreement. General Finance (Factor), Banca del Valdarno, Deutsche Bank, CFI, and Coopfond provided new resources to the company. IVV has revenues in the region of 9 million, an ebitda of 0.55 million, and a net debt of 1.37 million. Simone Carresi, chairman of IVV, said that this turnaround process will allow the company to get in shape again.

In the last few days we had also some news in the distressed real estate market. Algebris NPL acquired Grand Hotel et Des Palmes of Palermo from Acqua Marcia Turismo and Amt Real Estate, both in receivership (see here aprevious post by BeBeez). Algebris said it aims to rebrand the asset as a luxury hotel.

Banca d’Italia, the Italian Central Bank, appointed Elisabetta Spitz, the former coo of the Italian agency for state property administration, for carrying on the extraordinary administration of real estate investor Sorgente  (see here a previous post by BeBeez). Maria Teresa Bianchi, Giustino Di Cecco, and Dino Donato Abate will sit in the surveillance board. Carlo Petagna will keep its role as Sorgente coo and operate under the supervision of Banca d’Italia, which made such a decision after a lawsuit that Enasarco, the pension fund of Italian sales agent and commercial brokers, filed in August 2015 versus Sorgente. Enasarco revoked Sorgente from its role of managing the funds Megas, which has asset under management for 500 million of euros, and Michelangelo Due (AUM worth 350 million). Prelios and Dea Capital Real Estate are now managing the funds. Sorgente has a portfolio of real estate assets worth 2.5 billion and its pivotal shareholder is Valter Mainetti.

Aligros, an Apulia based real estate company that belongs to the Montinari family, signed an agreement with Mps, Banca Popolare Pugliese, Mediocredito Italiano, Bnl, and UBI Banca for restructuring its debt worth 35 million of euros (see here a previous post by BeBeez). Marcello Priori asseverated this agreement stating that the company has real estate assets for 65 million of euros.

As for the Italian private debt market, Giuliana Albera and Marina Caprotti, the widow and the daughter of retailer Esselunga’s founder Bernardo Caprotti, that inherited a 70% stake of the supermarkets chain, aim to buy out the remaining 30% of the company that belongs to Violetta and Giuseppe Caprotti, the other founder’s kids from his first marriage (see here a previous post by BeBeez). Giuliana Albera and Marina Caprotti have a put option on the stake of Violetta and Giuseppe Caprotti and will ask independent auditors to assess the value of their shares. The majority shareholders may finance such transaction through the issuance of a bond. Once completed this buyout, Esselunga may launch an ipo or sell to an investor. In 1H18, Esselunga posted sales of 3.8 billion (3.75 billion yoy), an adjusted ebitda of 407.8 million, and a net financial debt of 724 million.

Naples based energy efficiency company Graded issued a 1.5 million of euros minibond with a 5 years maturity and an amortizing reimbursement structure (see here a previous post by BeBeez). Private debt fund HI CrescItalia PMI Fund managed by Hedge Invest sgr subscribed the bond. Lucio Grassi, the chairman of Naples Association of industrial entrepreneurs, founded Graded in 1958 together with Maria Rosaria de Donato. Vito Grassi, Lucio’s son, is the company’s ceo. The company has revenues of 15.5 million, an ebitda of 1.2 million, and net financial debt of 0.14 million. Graded will invest the proceeds of this issuance in its organic growth.

Werther International, an Italian aftermarket automotive company that Stargate Capital acquired in February 2018, listed on ExtraMot Pro a short term minibond of 0.1 million of euros due to mature in October 2019, and paying a 4.2% coupon (see here a previous post by BeBeez). The proceeds of such issuance will finance the company working capital. Werther plans to raise up to a further 2 million with minibonds by the approval of the financial statements for 2018.

October P2P lending platform topped 111 mln euros in lending in to SMEs in 2018, more than 28mln in Italy

Proiezioni Future sells to Orion the office development portion of the SeiMilano Project in Milan. Orion will invest 100 mln euro