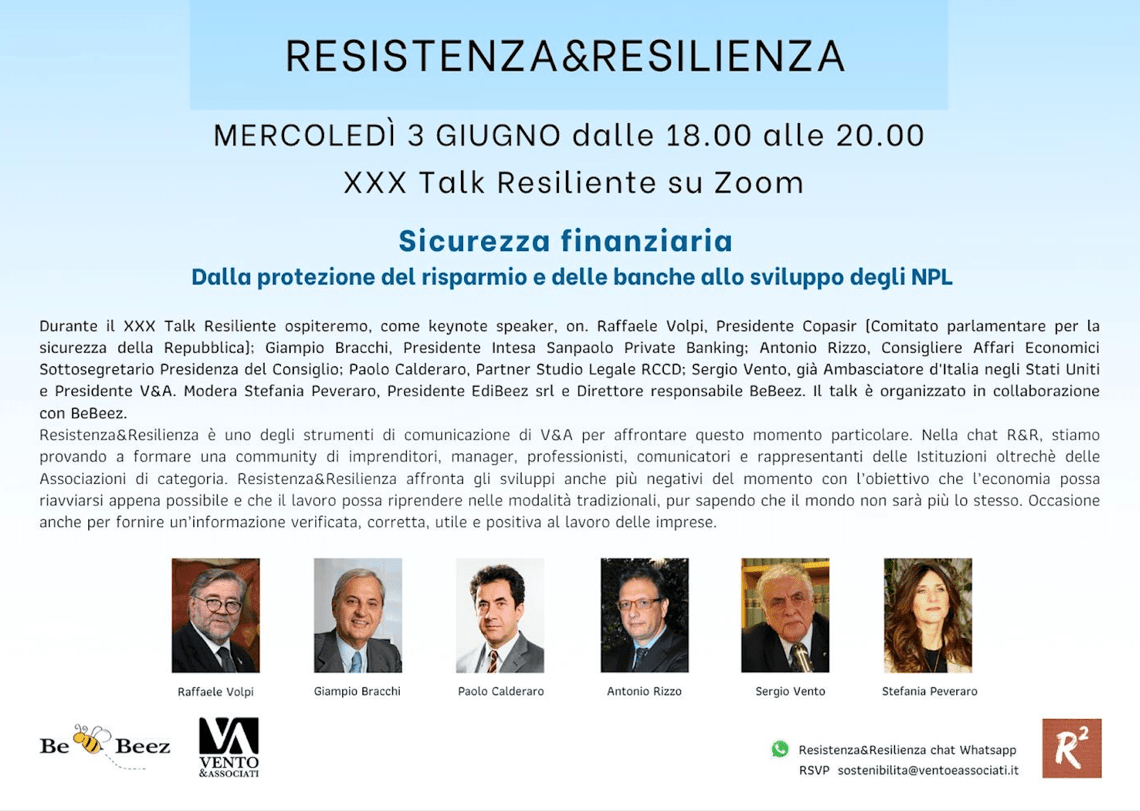 The golden power of the Italian Government will also involve the distressed credits with underlying strategic assets, said Antonio  Rizzo, the economic advisor to the Italian Premier Giuseppe Conte (see here the video recording of the event in Italian and here a previous post by BeBeez). Rizzo has been one of the speakers of XXX Talk Resiliente an online event of Vento&Associati (V&A) and BeBeez. The list of panellists included Paolo Calderaro, a partner of RCCD Law Firm; Giampio Bracchi, the chairman of Intesa Sanpaolo Private Banking; Raffaele Volpi, the chairman of Copasir; Sergio Vento, the former Italian ambassador in Paris and Washington and chairman of V&A. Stefania Peveraro, the Editor in Chief of BeBeez, moderated the event.

The European Banking Authority (EBA) said that the European banks could face the COVID-19 emergency grace to their substantial equity and good quality of credit (see here a previous post by BeBeez). However, each country and firm recorded different figures. Italian banks improved the quality of their assets with a 53.8% coverage ratio for NPLs well above the 44.7% EU median value, even though their distressed credits for 4Q19 make 6.7% of the total loans. At the end of 4Q19, the EU median NPL ratio was of 2.7%. However, Italian banks are improving such figure.

Prelios Innovation, a fintech subsidiary of Gruppo Prelios, sold Npls worth more than 35 million euros through BlinkS, the digital marketplace for NPL trading (see here a previous post by BeBeez). Part of these credits (27 million) had a warranty and a single credit name of more than 8 million. Gabriella Breno is the ceo of Prelios Innovation.

Guber Banca launched i 102, an initiative for aggregating 102 entrepreneurs that lead the production chain of their sector for supporting the company’s reverse factoring platform Anticipo 102 (see here a previous post by BeBeez). Anticipo 102 aims to pour 1 billion euros cash in the Italian production and supply chains and trading invoices with low fees. Matteo Marzotto is one of the ambassadors for the projects. Francesco Guarneri and Gianluigi Bertini founded Guber Banca in 1991. In March 2018, the company received a banking licence after having sold a 33.3% stake to Värde Partners in 2017. Earlier in May, Lorenzo Maternini, the vice-president of Talent Garden joined Guber Banca’s board of directors.

Assomineraria, the association of Italian mining and oil companies, and Frigiolini & Partners Merchant launched the Pluribond Assomineraria (see here a previous post by BeBeez). This issuance aims to support the oil and mining companies with a focus on sustainability. Frigiolini & Partners will act as arranger and global coordinator with the support of its subsidiary Fundera, a portal for placing minibonds with crowdfunding. Pluribond Assomineraria will be a virtual basket or an aggregation of minibonds that the companies part of Assomineraria will issue with a maturity of 12 -72 months and 24 months of pre-amortising. The short-term minibond will amount to up one million euros. Sign up here for BeBeez Newsletter about Private Debt and receive all the last 24 hours updates for the sector.

Intesa Sanpaolo and Sanlorenzo, the Milan-listed producer of yachts, signed a partnership for confirming and reverse factoring for supporting the cash flow of the business (see here a previous post by BeBeez). Sanlorenzo will allow its suppliers and the other rings of its production chain to get better access to credit through a 50 million euros facility for cashing the invoices of Sanlorenzo. In 1Q20, the company posted sales of 97.9 million (+11% yoy), an ebitda of 13.3 million (+45%), and net profits of 5.9 million (+88.2%). The bank signed the same kind of partnership with Merlo, a producer of machinery for handling and lifting, (See here a previous post by BeBeez). Gruppo Merlo will involve with this project 500 suppliers and 130 distributors. Gruppo Merlo has sales of 500 million.

Eurosintex, an Italian producer and distributor of systems for urban waste recycling, issued a 1.5 million euros minibond due to mature in 2025 (see here a previous post by BeBeez). Mediocredito Trentino Alto Adige subscribed the liability that has the warranty of InnovFin, a programme of the European Investment Fund. Angelo Martina and Annalisa Lazzari founded Eurosintex in 1996 and has sales of above 25 million. Sign up here for BeBeez Newsletter about Private Debt and receive all the last 24 hours updates for the sector. BeBeez welcomes you after the lockdown period with an unmissable offer: subscription to BeBeez News Premium and BeBeez Private Data for only 550 euros plus VAT from 1 June to 31 December 2020 Click here for more info

Unicredit subscribed a 10.5 million euros minibond that Elettra Investimenti, a Milan-listed investor in energy companies, issued in early May 2020, when the company received a financing facility of 11 million from the same bank with the warranty of Sace  (see here a previous post by BeBeez). The bond will mature in 72 months and has a pre-amortising period of 19 months, with a median duration of 4.4 years. The issuer will invest the proceeds in modulating its banking debt. The Bombacci Family founded Elettra Investimenti in 2009. The company has sales of 56.57 million (55.02 million yoy), an ebitda of 7.32 million (8.38 million), and net financial debt of 23.38 million (14.83 million). In 2019,  Electra acquired Novagreen, Light Venice Port, Gea, and Esco Biogas.

Riello Investimenti Partners launched Impresa Italia II, its second private debt fund with a fundraising target of 150 million euros (see here a previous post by BeBeez). The fund aims to attract resources of pension funds, insurers, entrepreneurs, and previous investors in other platforms of Riello. Alberto Lampertico will head the management team that will focus on senior secured debt transactions that involve companies operating in anti-cyclical sectors that will pay coupons and eventually an extra-yield linked to the business performance. The fund will look at companies with a clear ESG (Environmental, Social and Governance) strategy and rule out controversial sectors such as gambling and tobacco.

Borsa del Credito (BDC), the Italian fintech platform for financing SMEs in which invested P101, Azimut and GC Holding, launch the credit facility Cash Anti-Covid Fase 2 aimed to finance italian SMEs on the fintech platform (see here a previous post by BeBeez). Colombo II,  a new the direct lending fund 100% subscribed by Azimut will finance the facility up to 100 million euros, while Fondo di Garanzia del Mediocredito Centrale will guarantee 90% of the facilities. The cheme will allow SMEs to borrow 100k-600k euros with a tenure of up to 6 years (the first 12 months are of pre-amortising).

Andrea Enria, the head of the vigilance board of the ECB, said that banks are still too reluctant to use the buffers of liquidity for supporting the economy as they fear the reactions of rating agencies and are uncertain about the future policy of the European Central Bank (see here a previous post by BeBeez). However, Enria pointed out that the ECB will allow banks enough time to rebuild their buffers.

Eni to sell its natural gas assets in Australia. Macquarie, Santos and SK mull a deal worth up to one bn $