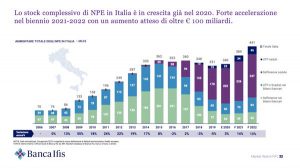 The total stock of non performing exposures in Italy, including those still in the portfolios of banks and those passed into the portfolios of investors, reached 340 billion euros in 2020 (of which 54 billions of bad loans still on bank balance sheets, 55 billions of UTPs and 5 billions of past due), but in 2021 it could rise to 389 billion euros and even touch the historical record of 441 billion euros in 2022 (see here a previous post by BeBeez). Banca Ifis calculates these figures in its latest Market Watch Report released a few days ago (see here the press release and here the complete study), which mapped NPEs  transactions for 37.7 billion euros GBV in 2020, of which 9 billions on UTPs and which estimates transactions on NPEs for at least 40 billion euros in 2021. Banca Ifis’s calculation on 2020 transactions for approximately 38 billions is a figure lower than the over 42 billions mapped by BeBeez (see here the 2020 Report on bad loans and other NPEs in its latest version, updated with the announcements arrived in recent weeks , but still related to 2020 operations, available to BeBeez News Premium subscribers). But it is possible that the difference is due to the fact that some operations mapped by BeBeez have not yet actually concluded, although they have been officially announced.

Davis & Morgan (DM), an Italian investor in distressed credits, aims to list on Milan stock market segment MTA or Star and could launch a pre-ipo in H1 2021, ceo Andrea Bertoni said to BeBeez (see here a previous post by BeBeez). Bertoni explained that the company aims to list through the launch of a capital increase and increase its equity value from 6 million euros to at least 15 million for seizing the opportunities that may arise in 2022.

La Murrina, the Italian iconic producer of Venetian-style ornaments whose ceo is Simone Ceriani, filed a receivership plan with Como Court (see here a previous post by BeBeez). The Ceriani Family owns the company since 1974.

If successful, the acquisition of distressed telco infrastructure company Italtel by the PSC group will be a complex operation, not only on the financial front, but also as in terms of effort to restructure and integrate the company into PSC Group. Marco Neri, ceo of Alpitel and former executive vice chairman of PSC Group, explained to BeBeez that the management of PSC is already used to the so-called special situations, given that it already completed the turnaround of Atisa (company of the group that produces and supplies fancoils and air handling units in the civil and naval sector) and Alpitel, a company that works for the main operators in the tlc sector carrying out large projects and orders such as fiber optic cabling throughout the Italian territory and is therefore the leader of a production chain consisting mainly of highly specialized SMEs and micro technology companies (see here a previous post by BeBeez).  Mr. Neri said that to free up cash, Alpitel also opened new factoring lines to sell trade receivables from customers and at the same time signed new reverse factoring agreements to support the supply chain. Thanks to reverse factoring, in fact, the factoring company provides for the purchase, on a revolving basis, of invoices issued by Alpitel’s suppliers which are then paid by the factor at their respective due dates, while Alpitel is granted a financial extension with respect to the deadline original of the invoices. Not by chance, Neri added, “to this end we also went in search of alternative finance, for example we signed an agreement with the Supply Chain Fund managed by Groupama am sgr” as well as they normally do at PSC level. And Italtel too then is seen to manage its supply chain flows in the same way.

Officine CST, an investor in both performing and distressed credits, acquired a total of 160 million euros of bad loans during 2020 and managed 200 million euros of performing invoice financing through its fintech platforms (see here a previous post by BeBeez). Roberto Nicastro and Gianpiero Oddone are the chairman and ceo of Officine CST, whose 57.11% owner is Cerberus. London-based P Partners Investments, of which Riccardo Banchetti has a controlling stake, owns 11.37% of CST founded by Mr. Oddone. In December 2019, the company had issued a Milan-listed minibond of 4 million euros due to mature on 31 December 2021 and paying a 2.35% coupon. Amundi subscribed the issuance aimed at supporting CTS buys of distressed credits.

Sia, the European hi-tech company leader in payment services and infrastructures and controlled by Cdp Equity, has entered into a partnership with the Italian fintech startup WizKey in order to negotiate credits using blockchain technology. The initiative aims to create an ecosystem where financial sector players can create a transparent, efficient and liquid secondary credit market: this will make it possible to manage, through Sia’s technological infrastructure, the entire negotiation process and credit transfer, also in the context of Npl securitization transactions (see here a previous article by BeBeez).

Borsa Italiana and Finlombarda signed a preliminary agreement for the further development of the minibond market on ExtraMot Pro3 segment and the corporate banking services of the financial firm of Lombardy region (see here a previous post by BeBeez). Finlombarda will subscribe minibonds in partnership with institutional investors according to the guidelines of Progetto minibond, launched in February 2016 with total resources of 300 million euros (120 million from the financial services firm and 180 million from the partners).  Finlombarda and Borsa Italia are working together already since December 2019 when they launched the Elite Basket Bond Lombardia, a basket bond issue programme worth a total of 100 million euros, aimed at financing the development plans of Lombardy SMEs in Italy and abroad. Cassa Depositi e Prestiti and Finlombarda are anchor investors, Banca Finint plays the role of arranger, while Elite, a company owned by Borsa Italiana, committs to the development of capital markets through the promotion of innovative financial instruments at the service of companies and real economy (see here a previous another article by BeBeez).

Cassa Depositi e Prestiti invested 20 million euros in October SME, the Eltif managed by the fintech lending platform to European SMEs October (see here a previous post by BeBeez). The Eltif also attracted 115 million from European insititutional investors such as Bpifrance, the European Investment Fund (EIF) and the Spanish Credit Institute (ICO). October SME is an Eltif that aims to invest in European private debt that October launched in July 2019 with a fundraising target of 250-300 millions.

By 15 March 2021, Milan-listed investment firm Gequity (fka Investimenti e Sviluppo), will issue a 1.4 million euros minibond that RiverRock will subscribe (see here a previous post by BeBeez). The minibond is due to mature in 2 years, will pay a 7.5% coupon and have the warranty of Fondo centrale di garanzia. The company will invest the raised proceeds in refinancing a convertible bond that issued in February 2016 due to mature on 31 March 2021 and paying a 4% coupon. This bond can be converted in equity between 25 February and 25 March. In May 2017, Believe (fka HRD Italia) acquired 50.51% of Gequity from Sintesi, a company in receivership. Believe launched a delisting offer on the remaining shares.

Mondial Suole, a producer of soles for Italian luxury shoes, received a 6.5 million euros financing facilities from Illimity Bank (see here a previous post by BeBeez). Mondial Suole has a turnover of 40 million. Sign up here for BeBeez Newsletter about Private Debt and receive all the last 24 hours updates for the sector.

EthicalFin NPL, an investor in distressed credits, aims to raise 35k-75k euros through a lending crowdfunding campaign on Business Lending (see here a previous post by BeBeez). The company will borrow resources from investors and in 18 months with an annual ROI of 5.5% and a total ROI of 8.25%. Investment tickets will be of 100 – 8.750 euros. EthicalFin will invest the raised proceeds in its organic development. EthicalFin NPL has a turnover of 281,000 euros, an ebitda of 18,000 euros and net profits of 8,595 euros.

Massimo Di Carlo, the co-founder and senior advisor of Springrowth sgr, joined Milan-listed Illimity as Chief Lending Officer of the bank and chairman of the firm’s Credit & Corporate Turnaround Fund that has a fundraising target of 350 million euros (see here a previous post by BeBeez). In April 2020, Illimity raised 417 million for its direct lending fund.