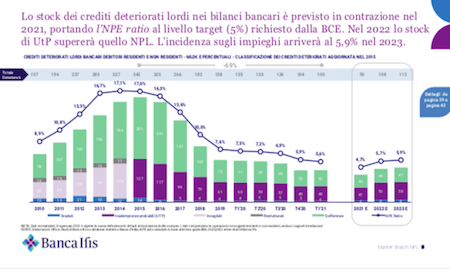 In 2022 Italian banks will have on their books more UTPs than NPLs while distressed credits will amount to 108 billion euros (90 billion at the end of 2021, 104 billion at the end of 2020) Market Watch Npl of Milan-listed Banca Ifis says (see here a previous post by BeBeez). All this will happen while investments in NPEs by specialized investors will continue, so much so that in 2023, 75% of the stock of Italian NPEs, equal to 317 billion euros out of a total of 430 billion, will be passed from bank balance sheets to those of investors. More in detail, Banca Ifis still expects a slight prevalence of bad debts over unlikely to pay on banks’ balance sheets by the end of the year (42 billions against 41 billions, plus 6 billions of past due loans), while in 2022 the stock of UTPs on the balance sheets of Italian banks will rise to 56 billions, bad loans will only grow to 44 billions and past due loans will amount to 8 billions. The trend should be confirmed in 2023, when Banca Ifis forecasts 58 billions of UTPs against 47 billions of bad loans and another 8 billions of past due. The decline in the stock of NPEs on the balance sheets expected for the end of the year is not a surprise and was already evident from the H1  FY 2021 Interim Reports reports of the first Italian six banking groups. The Insight View of BeBeez of last August (available to subscribers to BeBeez News Premium and BeBeez Private Data) 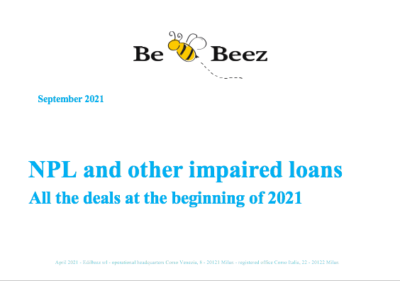 showed that there were approximately 57.4 billion euros of gross NPEs on the balance sheets of the top six Italian banking groups (now considering UBI Banca integrated into Intesa Sanpaolo) at the end of June 2021, still down from the 61.5 billions at the end of March (see here a previous Insight View by BeBeez), when a further drop from the 65 billions at the end of December 2020 was recorded. Meanwhile portfolio disposals are continuing. In almost nine months in 2021 NPLs transactions were finalized worth 8.1 billion euros GBV and the pipeline still sees 26 billion euros expected, of which over 9 billion of operations already in progress. On the UTPs front, Banca Ifis also expects 10 billions in sales by December 2021. Numbers are in line with the ones mapped by BeBeez in his latest NPL Report even if sometimes  they differ as banca Ifis includes transactions already accounted for by BeBeez at the end of 2020 or that BeBeez estimates will be official announced in 2022. Frederik Geertman, the ceo of Milan-listed Banca Ifis, said that the firm might consider bolt-on buys and partnerships, but nothing is currently on the table.

Solution Bank (fka Credito di Romagna), a lender of which Hong Kong’s SC Lowy acquired 90% in 2018, is now a completely different bank. Actually, after three years of SC Lowy care, Solution Bank now grinds profits and also finances small, but even more often medium-sized companies, participating in syndicates which before it would have not had access. And that’s not all, because, thanks to the experience of the parent company, SC Lowy, the bank also finances both short and medium-long term companies that are in what are defined as “special situations”, as they are living a moment of liquidity crisis or because have just emerged from an insolvency procedure and traditional banks still do not trust to support them relevant lender for companies in special situations. Discover what coo Frank Fogiel and Michel Lowy said to BeBeez (see here a previous article by BeBeez).

Equita Private Debt Fund (EPD), part of Equita Group, reached its fourth fundraising closing with total commitments of 178.5 million euros (see here a previous post by BeBeez). The final target is of 200 millions with a hard cap of 250 millions. Earlier in June, the fund reached its third closing of 148.5 million. The first closing in September 2020 amounted to 100 million and the second in May was worth 131.5. EPD attracted the resources of Fondo Italiano d’Investimento and the European Investment Fund.

Idea Food, the official franchisee of US-based fast-food chain Kentucky Fried Chicken (KFC) for the Centre end South of Italy, issued a 5-years minibond of 3.5 million euros that Zenit subscribed (see here a previous post by BeBeez). Idea Food has sales of 3.1 million, an ebitda of 0.209 million and net cash of 0.115 million. The company will invest the proceeds in the opening of further 4 shops and improving its management and governance. Sign up here for BeBeez Newsletter about Private Debt and receive all the last 24 hours updates for the sector.

Pistacchio, an Italian producer of semifinished pistachio products, issued a 3 million euros minibond that Anthilia, Eltif Economia Reale Italia and 8A+ Real Italy Eltif subscribed (see here a previous post by BeBeez). The 5-years bond has a pre-amortizing period of 12 months and an amortizing reimboursement. Pistacchio has sales of 14.3 million and an ebitda of 1.7 million (an ebitda margin of 11.3%). In 2018, Red-Fish Kapital (RFK) acquired 69.4% of the business that in 2019 issued a 0.75 million bond. The company will invest the raised proceeds in its organic development and the expansion of its foreign operations. Sign up here for BeBeez Newsletter about Private Debt and receive all the last 24 hours updates for the sector.

Tozzi Green, a developer of renewable energy plants, received a green financing facility of 22 million euros from Bnl Bnp Paribas with the warranty of SACE (see here a previous post by BeBeez). The company will invest such proceeds in the development of the wind farms in Sicily with a total power of 17.6 MW. Tozzi Green has sales of 88.3 million with an ebitda of 45 million and net profits of 4.5 million.