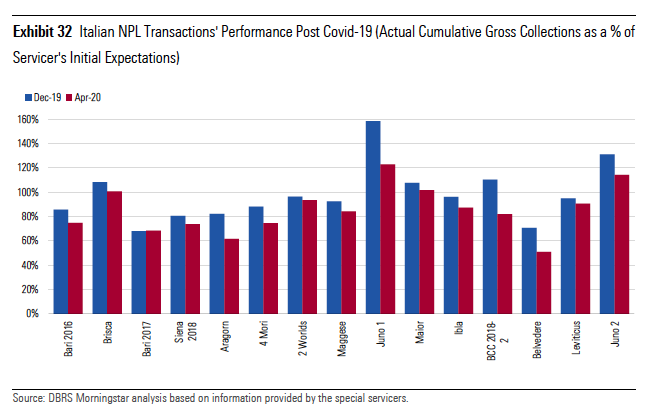 At the end of April 2020, the Italian securitization vehicles for Italian Npls that received a rating in half 2019 from DBRS Morningstar, worsened their performance as a consequence of the Covid-19 turmoil (see here a previous post by BeBeez). The vehicles’ cumulative collection ratio in April recorded a worse performance than in December 2019 (between -3% and 25.5%). Christian Aufsatz, the head of European Structured Finance of DBRS, presented such data together with the report European Nonperforming Loan Securitisations: Steady Supply but Uncertain Outlook on Performance Post-COVID-19.

French credit investor iQera Group (fka MCS-DSO), launched iQuera Italia and appointed Francesco Magliocchetti as country manager (See here a previous post by BeBeez). iQuera Italia is the parent company of the two Italian companies that MCS-DSO acquired in the last two years. MCS-DSO coms from the merger of MCS Group and DSOGroup, an asset that belongs to BC Partners and Montefiore Investment Management. In 2019 MCS-DSO acquired Sistemia from KKR, which purchased the majority of the asset from the ceo Guido Fienga and the managing director Paolo Sgritta. MCS-DSO changed its name into iQera Group in late 2019.

Unicredit and Intesa Sanpaolo appealed against the decision of Reggio Emilia Court, to accept Ferrarini’s new receivership plan and the company’s renunciation to previous restructuring agreements (see here a previous post by BeBeez). The banks think that Ferrarini aims to delay the presentation other proposals on top of those that Pini and Bonterre-OPAS-Casillo-Intesa Sanpaolo tabled for Ferrarini and its subsidiary Vismara. Ferrarini has debts of 200 million euros with Unicredit, Intesa, Amco, and Mediobanca. Vismara also made a new receivership proposal for its creditors after Amadori withdrew its plan for investing up to 30 million in the company. According to the plan, Vismara would pay 20% of its 84 million unsecured debts to the holder of hybrid instruments and 100% of its senior debt.

The Court of Ascoli Piceno is investigating about the bankruptcy of Saco, a construction company (see here a previous post by BeBeez). The company has debt of 300 million euros and in September 2019 withdrew its receivership application after Cerberus, the company’s main creditor, dropped the implantation of a restructuring plan. Cerberus acquired Saco’s debts in November 2017 together with a portfolio of Npls of Banca Marche with a face value of 760 million. Rev, the bad bank that grouped the 10.3 billion of distressed credits of Banca Etruria, Carichieti, Cariferrara, and Banca Marche, which provided Saco with facilities of 135 million.

Astaldi, the Milan-listed troubled contractor, set Astaldi Concessions after having spun-off Astaldi Concessioni (see here a previous post by BeBeez). Earlier in April, the European Commission approved Webuild’s (fka Salini Impregilo) buy of Astaldi and gave a boost to the realization of Progetto Italia, an integration of Italian contractors with the support of Cdp.

Padoa’s Court accepted the receivership application of Pittarosso, the Italian shoe retailer (See here a previous post by BeBeez). The court set a 120 days deadline for the company to table a restructuring plan. Pillarstone’s RSCT Fund acquired a relevant portion of the company’s debt that also attracted the interest of KKR. In April 2019, Lion Capital, which owns Pittarosso since 2014, started to restructure the company’s debt and asked lenders (Intesa Sanpaolo, Unicredit, Mps, Banco Bpm, Sparkasse- Cassa di Risparmio di Bolzano, and Bnl) to agree a standstill for the business’ 200 million liabilities. Lion Capital purchased Pittarosso from 21 Investimenti and Quadrivio on the ground of an enterprise value of 280 million.  Pittarosso has sales of 366.8 million, an ebitda of 16.2 million and a net financial debt of 97.3 million. In August 2018, Marcello Pace replaced Andrea Cipolloni in his ceo role.

Italian network of parking companies ParkinGO raised a direct lending facility from an institutional investor with the support of Azimut and fintech platform Epic (See here a previous post by BeBeez). ParkinGO provided services for parking and recharging of electric vehicles. In November 2019, ParkingGO launched a Swiss STO (Securities Token Offering) with the help of Stoker, which owns an European licence for banking, Giuliano Rovelli (80% owner), previously said to BeBeez. In 2013 HAT Sicaf (fka HAT Holding) acquired 20% of ParkinGO. Sign up here for BeBeez Newsletter about Private Debt and receive all the last 24 hours updates for the sector. BeBeez welcomes you after the lockdown period with an unmissable offer: subscription to BeBeez News Premium and BeBeez Private Data for only 550 euros plus VAT from 1 June to 31 December 2020 Click here for more info

Plissé, an Italian textile company that owns the brands Sfizio and Beatrice B, issued a Milan listed of 0.75 million euros on 12 June, Friday (See here a previous post by BeBeez). The bond pays a 4% coupon and is due to mature on 12 June 2022. The company will invest the resources in facing the COVID-19 turmoil. This is the fifth issuance of Plissé that in 2019 repaid a 0.5 million short-term minibond matured on 31 May 2020. Morena Bragagnolo (ceo and 40% owner) and Paolo Mason (60% owner and co-ceo) founded the company in 1988. Plissè has sales of 25.1 million (24.4 million yoy) and an ebitda of 2.8 million (2.6 million).

Undo, a clean energy and precision mechanic company, generated a 2019 turnover of 13.5 million euros and set a 17 million target for 2020 (see here a previous post by BeBeez). Umberto Deodati, one of the founders of Undo, said to BeBeez that the company hired Ernst & Young and other financial advisors for issuing two bonds and carrying on three project financing deals.

Borsa del Credito, the lending platform for SMEs, launched the financing facility Cash Anti-Covid Fase 2  (see here a previous post by BeBeez). P101, Azimut and GC Holding invested in BDC. Colombo, the direct lending fund of BDC that Azimut subscribed, will finance CACF2.  Earlier in April, Colombo signed an agreement for  issuing up to 100 million euros in SMEs financing through BDC and the warranty of Fondo di Garanzia del Mediocredito Centrale for up to 90% of each facility.

Italian department store La Rinascente received a 35 million euros financing from Intesa Sanpaolo and the programme Garanzia Italia of Sace (see here a previous post by BeBeez). Sace provided the facility with a warranty that the Italian Government secured for 70%. La Rinascente will invest these proceeds in its working capital and supply chain, said cfo Mariella Elia. Intesa Sanpaolo’s global head of corporate and investment banking Richard Zatta, said that the bank allocated 50 billion for supporting Italian companies in restarting after the COVID19 turmoil. Thailand’s Central Retail acuired La Rinascente in 2011 on the ground of an enterprise value of 260 million from Investitori Associati (46%), RREEF (30%), Prelios (20%), and Gruppo Broletti (4%). The company has sales of 800 million (680 milion in 2018).

The Italian Government extended Sace’s warranty also to private debt investments and to factoring transactions (see here a previous post by BeBeez). The guarantee is for issuera with a rating of at least BB- or equivalent. The subscribers of issues of companies with a rating lower than BBB- will have to keep at least 30% of the debt for the whole tenure.

The COVID-19 turmoil impacted Italian factoring firms, whose turnover increased by  6.44% in 2019 and went down 0.45% in March 2020 and 5.53% in April, said Assifact, the Italian Association of Factoring companies (See here a previous post by BeBeez). The turnover could go down 11.91% in 1H20 and recover in 2H20, said Alessandro Carretta, the general secretary of Assifact, whose chairman is Fausto Galmarini.