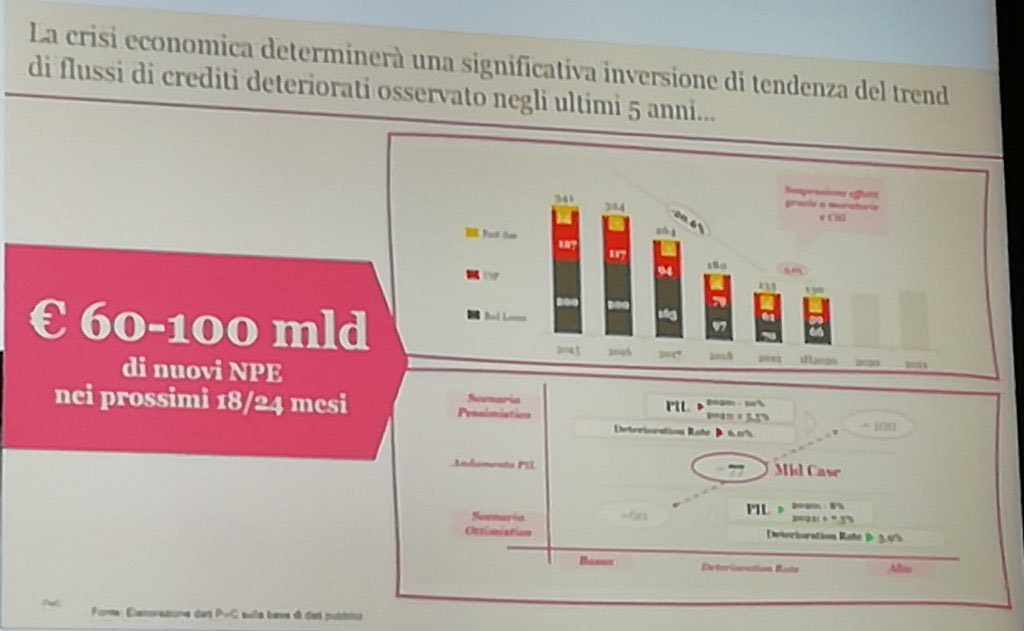 BeBeez will be a media partner for Global NPL, an online event of SmithNovak for 27 and 28 October, Tuesday and Wednesday (see here a previous post by BeBeez). The conference will allow for an effective networking through a conference app. More than 300 market participants will join the event that will host roundtables with more than 80 speakers. Click here for further information

In the next 18-24 months, the Italian NPEs may increase by 60-100 billion euros, Pier Paolo Masenza, a partner and financial services leader of PwC, said during the Credit Village Spring Day 2020  (see here a previous post by BeBeez). Masenza shared the results of the report “Distressed debt ecosystem: The Italian new deal” and pointed out that the Italian banking system is ready to bear a new flow of NPLs. Giuseppe Castagna, the ceo of Banco Bpm, said that such a new flow may be the trigger for the aggregation of Italian banks.

“Before the coronavirus emergency, the volumes on NPEs transactions were decreasing and we expected a 2020 and 2021 with the minimum of annual sales. After the coronavirus emergency, banks’ NPEs and NPE ratios will rise and consequently we will have see significant sales volumes”, Andrea Clamer,  head of the distressed credit investment & servicing of Illimity, said to BeBeez (see here a previous post by BeBeez).  But Mr. Clamer added: “We will actually see impact on NPEs disposals only in 2022, when there will no longer be the timed life of credit moratoriums: I expect disposals over 40 billion euros per year “.

Zenith Service securitised the 8.1 billion euros worth NPEs Hydra portfolio originated by Montepaschi that AMCO is going to acquire (see here a previous post by BeBeez). The deal will be structured in an innovative way as the securitization spv will not buy the NPEs but simply issue a loan facility to AMCO which will be collateralized by the Hydra portfolio loans, so that the NPEs portfolio will remain on AMCO’s books.

Prelios and Generalfinance signed an agreement for supporting companies that have Utp debts with banks (see here a previous post by BeBeez). Generalfinance will collaborate with Prelios and supply fresh resources for the working capital of companies in distress.

Cribis Credit Management, a subsidiary of Gruppo Crif, and Nctm Studio Legale created the law firm NextLegal with a focus on recovery of impaired loans (see here a previous post by BeBeez). Gianluca Massimei will lead the Bologna-based company. NextLegal will sell its integrated services based on proprietary methods and software to financial services firms and corporates.

Bergamo Court accepted the receivership application of Brevi Milano, a manufacturer of early childood products (see here a previous post by BeBeez). The court appointend Rosario Dentamaro as commissioner and scheduled a meeting with creditors on 10 February 2021. In June 2018, Phi Fund, a Spanish turnaround investor, acquired Brevi Milano and part of its banking debt. Since the acquisition, Phil poured resources for 2.5 million, but could not complete the turnaround in light of the birth rate drop. Wise sold Brevi in 2017. Giuliano, Attilio and Romano Brevi founded the company in 1954. Brevi Milano has sales of 12.1 million euros, losses of 3 million, equity of 0.576 million, and debt of 11 million (3.6 million with its suppliers).

Bain Capital and Neuberger Berman issued a high yield bond of 605 million euros for refinancing the bridge loan for the acquisition of Engineering Ingegneria Informatica (See here a previous post by BeBeez). The senior secured Luxemburg-listed bond is due to mature on 30 September 2026 and pays a 5.875% coupon. The issuance received a B2 rating with stable outlook from Moody’s, a BB- rating (corporate B+) from FitchRatings.

Italian fintech platform CrescItalia Lab, part of Crescitalia Holding, generated a turnover of 41 million euros in invoice financing to SMEs since it had started activity more than one year ago (see here a previous post by BeBeez). Mattia Donadeo Spada, is the ceo of CrescItalia.

Udinese Calcio, an Italian Serie A football team, received a 5 million euros direct lending facility from an undisclosed institutional investor (see here a previous post by BeBeez). The team will invest such proceeds in its working capital and signing the tranferts of new footballers. Udinese Calcio has a turnover of 113 million, while in the last season it achieved capital gains of 49.8 million out of the sale of footballers that pushed the ebitda from 16.1 million to 39.4 million. Sign up here for BeBeez Newsletter about Private Debt and receive all the last 24 hours updates for the sector.

Atlantia stock posted a jump of more than 9% yesterday, after the news of exclusive talks with Cdp on ASPI’s 88% stake sale. With Blackstone and Macquarie as co-investors