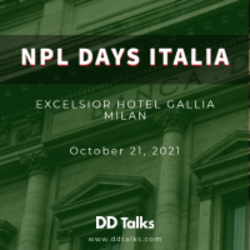 BeBeez is the sole media partner of NPL Days Italia, an event of DDTalks that will take place on 21 October in Milan at the Excelsior Hotel Gallia. Click here for further information. The attendees of NPL Days may pay 200 euros instead of 240 euros for a 12-month subscription to BeBeez News Premium. Write to info@edibeez.it with NPL Days Italia in the subject and a proof of attendance to get a discount code.

The debt of bankrupted SECI, the holding of the Maccaferri family, attracted the interest of other distressed credit funds after Apollo Global Management bought a significant slice of debt some months ago. Actually Unicredit’s 120 million credits with SECI are said to be now of interest to Apollo itself as well as ofSC Lowy, Europa Investimenti and Taconic (see here a previous post by BeBeez). On 21 September, Tuesday, Bologna Court accepted the receivership application of Officine Maccaferri and set a meeting with its creditors on 16 February 2022. Start-Cutter will subscribe a capital increase of Samputensili Cutting Tools and raise its current minority stake to 75%. On 24 febbraio 2022 the company will hold a meeting with its creditors. SECI’s debt is worth in the region of 750 million (500 million of financial debt which include debt of 90 million). The funds are keen on SECI’s 51% of Manifatture Sigaro Toscano (MST) which has sales of 106 million, an ebitda of 34.2 million and a net financial debt of 49.1 million.

Sources said to BeBeez that Gas, a troubled Italian brand for casual fashion that belongs to the Grotto family through the Grotto Group, will hold next week a meeting at the Italian Ministry of the Economic Development (MISE) with its creditors, the insolvency administrator and the labour unions for finding a soultion that may avoid a bankruptcy (see here a previous post by BeBeez). Three potential trade buyers are testing the waters with Grotto’s financial creditors for a white-knight deal. DeA Capital Alternative Funds, which acquired 51% of the company’s medium-long term debt in 2017 and all Unicredit’s short term debt in the last few weeks (for a total of 34.5 million euros out a 53.7 million euro of all SECI’s financial debt), did not express any opinion about the restructuring plan that Gas proposed on 16 September during the creditors meeting, a move that for the Italian law is the same as voting against (see here a previous post by BeBeez). Banco BPM (6.5 millions of debt) did not partecipate to the meeting, again also a move that for the Italian law is the same as voting against the proposed plan. While tit was not possible to have confirmation on the fact the vote of the other lending banks MPS and Intesa was in favour of the plan or not, but their credits amount to a total of about 4-5 millions. So the plan did not pass even if AMCO (12.7 million of SECI’s debt) and the Italian Inland Revenue (Agenzia delle Entrate) had voted in favour. The sources said that Dea and AMCO may agree to invest together with the MISE and the eventual trade buyer and convert in equity part of its credits with the company. Grotto needs 6-10 million of fresh resources, the sources explained. Vicenza Court may issue a bankruptcy sentence in November if talks don’t go through, and the company may go through a piecemeal sale while its workers may join the creditors for claiming their severance.

In 3Q21, Milan-listed illimity Bank acquired corporate and real estate distressed credits with a face value of 300 million euros and 50 million, 158 million of these are secured (see here a previous post by BeBeez). The gross value of the bank’s distressed credits amounts to 8.5 billion.

Italian design brand Alessi, a portfolio company of Oakley Capital, received a financing facility of 18 million euros from illimity, Intesa Sanpaolo and Banco BPM (see here a previous post by BeBeez). The loan has a tenure of 6 yeard and SACE provided a warranty. Alessi has revenued of 54.2 million, an ebitda of 17,000 euros and net cash of 4.5 million. The company will invest the borrowed proceeds in expanding in USA and China and developing further its e-commerce sales.

Media-Maker, a Paris-listed producer of multimedia contents, is mulling for the issuance of bonds worth in the region of 10 million euros and for applying for loans worth 10 million (See here a previous post by BeBeez). The company hired KNG Securities and Lucciola & Partners for sounding the ground and eventually start a roadshow. Media-Maker will invest the proceeds that eventually raise in its organic growth. The company has sales of 45.6 million (+48.7% from 30.6 million in 2019), an ebitda of 1.49 million (+4.1% from 1.43 million), net profits of 1.11 million (+92.4% from 0.58 million), net financial debts of 1.8 million (0.8 million), and equity of 5.9 million (4.5 million). Patrizia Amicucci founded Media-Maker in 2017.

Tages Capital hired Giovanni Mattioli for heading the private debt division that will create in early 2022 for investing in Italy (see here a previous post by BeBeez). Tages hired Eugenio Vecellio as head of sales for the division. Mattioli previously worked for Green Arrow Capital (fka Quadrivio Capital) as chief investment officer and director of the private debt fund and for Mezzanove Capital as Investment Manager. Vecellio is the former institutional sales manager of Pramerica. In 2017 he opened Groupama Asset Management’s offices in Milan and previously worked as relationship manager institutional and Wholesale of Global Selection (part of Ceresio Investors) and for Prometeia. Sign up here for BeBeez Newsletter about Private Debt and receive all the last 24 hours updates for the sector.

Gruppo Cornaglia, an Italian producer of automotive components, attracted financing facilities of 34 million euros from Intesa SanPaolo, UniCredit and Banco BPM (see here a previous post by BeBeez). The loans have a 6-years tenure and the warranty of Sace. Gruppo Cornaglia belongs to the eponymous family and has sales of 220 million. Tommaso Cornaglia, the company’s cfo, said that the company will invest such proceeds in implementing ESG strategies and the digitization of processes. Sign up here for BeBeez Newsletter about Private Debt and receive all the last 24 hours updates for the sector.

Umbra Rimorchi, an Italian producer of towbars, issued a bond of 1.2 million euros that starting on 19 November, Friday, will  be placed to institutional investors through the CrowdBond portal (see here a previous post by BeBeez). The bond pays a 4.5% coupon with an amortising reimboursement and the payment in advance of interest. Mediocredito Centrale provided the warranty for 80% of the issuance. Umbra Rimorchi has sales of 7.4 million and an ebitda of 0.218 million. Sign up here for BeBeez Newsletter about Private Debt and receive all the last 24 hours updates for the sector.

Casa di Cura Villa Regina, an Italian health care company, issued a minibond of 2 million euros that Mediocredito Trentino Alto Adige subscribed (see here a previous post by BeBeez). Casa di Cura Villa Regina issued a 750k euros bond in January 2020 that Mediocredito Trentino Alto Adige subscribed. The company belongs to the Guarnati Cariello family and has sales of 7.3 million, an ebitda of minus 1.4 million and net cash of 0.45 million. Casa Cura Villa Regina will invest the raised proceeds in acquiring the elderly care unit of Residenza Sacra Famiglia. Sign up here for BeBeez Newsletter about Private Debt and receive all the last 24 hours updates for the sector.

Tecna, an Italian producer of industrial components, issued a 6-years minibond of 2 million euros that Intesa Sanpaolo subscribed and received a warranty for 80% from Fondo Centrale di Garanzia (see here a previous post by BeBeez). In 2016, Damiano Bergami acquired Tecna which has sales of 20.4 million and an ebitda of 3 million. The company will invest the raised proceeds in its organic development. Sign up here for BeBeez Newsletter about Private Debt and receive all the last 24 hours updates for the sector.