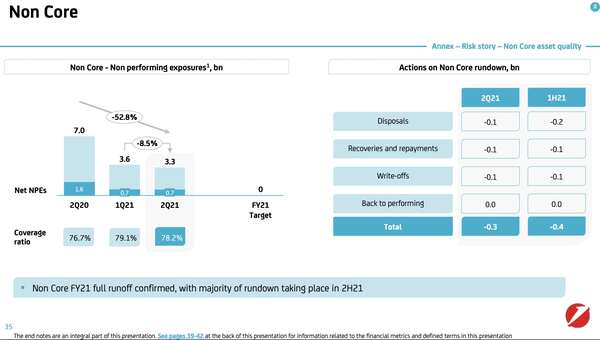 Unicredit is mulling for a sale of UTPs worth one billion euros (see here a previous post by BeBeez). The bank is said to be selecting the servicers for the portfolio, Pitches are coming from doValue, Prelios, Intrum, Gardant, and Aurora Recovery Capital.  Currently on the Unicredit table there would be the management of the whole UTPs loans on the banks book. Up to now, the approach has been to treat individual positions on a case-by-case basis, but other options are said to be considered, such as a partnership with an industrial operator active in debt management, such as the one signed in August 2019 by Intesa Sanpaolo with Prelios.

AMCO acquired NPEs from 33 co-operative banks that are part of Iccrea (see here a previous post by BeBeez). The majority of the portfolio includes Utp with a gross book value of 264 millions, secured NPLs worth 222 millions and leasing credits of 42 millions.

Fidia, a Milan Italian industrial company, has been admitted to the receivership  procedure by the Ivrea Court (see here a previous post by BeBeez). The plan provided for the receivership procedure is based on the intervention of the new financial investor Negma Group, specialized in hybrid debt and equity instruments, together with FAI Futuro all’Impresa, a Milanese advisory and investment company specialized in m&a and restructuring operations, alongside the entrepreneur Giuseppe Morfino, who currently holds a 52.03% stake in the company (0.2% are treasury shares and the rest is floating on the Milan Stock Exchange) After the transaction Fidia would belong to Negma (55%), FAI (25%) and Morfino (20%).

Fondo Italiano d’Investimento (FII) and Stellex Capital Management (SCM) will receive the financing support of the Eltif 8A+ Real Italy for the acquisition of Mecaer Aviation Group (MAG)’s majority on top of the support received by Anthilia BIT, Anthilia Eltif Economia Reale Italia and Solution Bank (see here a previous post by BeBeez). MAG’s enterprise value amounts to 100 million euros. Bruno Spagnolini, the company’s chairman and ceo, joined the buyers for the acquisition of MAG from Private Equity Partners, PEP holding, NB Renaissance Partners, and SBI, whose shareholders kept a minority of the target. MAG has sales of 139 million, an ebitda in the region of 20 million and a net financial debt of 27.3 million.

Milan-listed Bialetti Industrie, the iconic Italian brand of coffee machines, issued bonds for 10 million euros that illimity Bank subscribed (see here a previous post by BeBeez). Milan-listed illimity also acquired unsecured commercial credits  from other banks with the company for a total of 36 millions and a face value of 55% Bialetti’s unsecured credits. In 2019, Sculptor Capital Management subscribed a bond of 38.5 million. Bialetti has debts of 64 million. The company has sales in the region of 65 million and an ebitda of 11.8 million.

Plissé, an Italian fashion firm that owns the brands Sfizio and Beatrice B, issued a long-term 750k euros minibond due to mature on  30 September 2027 (see here a previous post by BeBeez). The bond pays a 4% coupon and received a 90% warranty of SACE. The company placed the bond on Fundera, the equity crowdfunding platform of Frigiolini&Partners Merchant. The company will invest the raised proceeds in its digital transition.