bybebeez
in Bad loans and other NPLs, Crisis & Relaunch, Private Debt, Real Estate
A A
Share on FacebookShare on Twitter 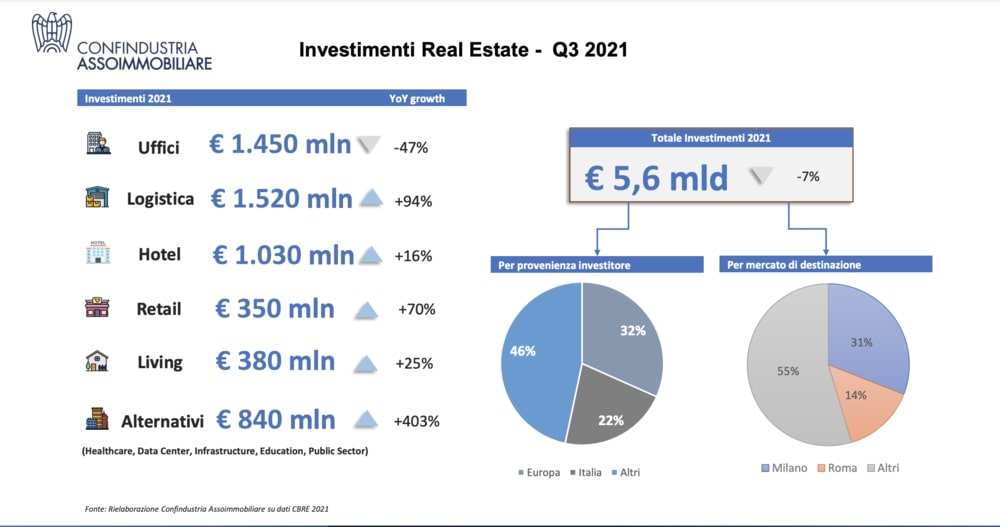 In 3Q21, the Italian investments in real estate amounted to 5.6 billion euros (-7% yoy), Silvia Rovere, the chairwoman of Assoimmobiliare, said during an event of Zenith Service (part of Arrow Global) on real estate securitizations that Stefania Peveraro, the Editor in Chief of BeBeez, moderated (see here a previous post by BeBeez). Mrs. Rovere quoted the data of a report of CBRE. According to JLL Italian real estate investments in 3Q21 amounted to 5.4 billions. According to BeBeez data, between January and August 2021 announced real estate investments amounted to 4.95 billion (see here the BeBeez Real Estate Report for January – August 2021 available for the subscribers to BeBeez News Premium and to BeBeez Private Data). Carlo Cottarelli, the head of the Observatory about Italy’s Public Finance – Milan’s Università Cattolica, and Alessandro Gatto, managing director and co-head structured finance South Europe of JPMorgan also took part of the panel.

Iccrea Banca carried on a securitization with GACS warranty of a portfolio of NPLs with a face value of 1.3 billion euros including both credits and assets related to non performing leasing loans (see here a previous post by BeBeez). Non performing leasing assets amount to 165 millions. The securitization is in three tranches maturing in April 2046: senior of 284 million (Baa2(sf) rating from Moody’s, BBB(sf) from Scope Ratings and BBB(sf) from ARC Ratings); mezzanine of 39.5 million (Caa2 from Moody’s, CCC from Scope and CCC+ from ARC); junior of 13 million. The senior notes pay a floating rate of 6M Euribor zero floor + 35 bps; class B notes pay a rate of 6M Euribor zero floor + 8%. Senior secured loans are 58.4% of the NPLs, unsecured 34.4% and junior 7.3%. Investors in the mezzanine and junior tranches may ask the issuant to launch a ReCo before October 2023.

Milan-listed Unicredit securitised a portfolio of NPLs with a gross value in the region of 2.2 billion euros (see here a previous post by BeBeez). Olympia spv acquired the credits and issued abs senior notes for 261 milion (for which the issuer required the Gacs warranty); mezzanine notes of 26.1 milion; junior notes of 2.9 million. All the tranches will mature on July 2044. The senior tranche received a Baa2 rating from Moody’s and Scope and BBB from S&P. UniCredit will keep 5% of the mezzanine and junior notes as net economic interest. The senior notes will pay a rate of 6M Euribor + 1.5% with a cap, while the yield of class B will be of 6M Euribor + 9.5%.

Italy’s NPEs recovery firm 4Invest Npl launched a crowdfunding campaign on MyBestInvest for raising 0.1 – 0.25 million euros on the ground of a pre-money value of 250k euros (see here a previous post by BeBeez). The company already raised 75,000 euros. MVZ and Studio Legale Integrato founded 4Invest Npl that aims to acquire Utps, unsecured credits and mortgages from banks. Manuel Verde is the founder of 4Invest Npl and said that the company will invest the campaign’s proceeds for acquiring unsecured credits for at least 4 million.

Milan Court accepted the complaint of J-Invest versus Genia, a multiutility company of the San Giuliano Milanese municipality that bankrupted in 2015 with debts of above 40 million euros (See here a previous post by BeBeez). J-Invest, an investor in NPEs that Jacopo Di Stefano heads, previously refused the debt restructuring proposal of the Municipality. J-Invest acquired distressed credits of Genia for a total of 13.26 million from BNP Paribas in 2015, Banco Bpm (fka Bpm) in 2017 and Crédit Agricole in 2020.

Grancasa, an Italian chain of furniture shops that belongs to the Morosi family, received from illimity Bank a loan of 25 million euros as part of a debt restructuring agreement (See here a previous post by BeBeez). Grancasa’s real estate assets are worth 300 million while banking debts are worth 120 million. In 2018, the company received from Banco BPM, Intesa Sanpaolo (and UBI Banca) credit lines for 100 million. Grancasa previously attracted the interest of Oxy Capital and Pillarstone Italy, but the company’s lenders decided to sell their credits to illimity’s corporate Utps fund.

Banco BPM made a securitization of commercial performing credits worth up to 30 million euros (see here a previous post by BeBeez). The spv issued abs notes that Banco BPM (senior tranche), Trinity Fund (junior tranche) and other investors subscribed.

Sacmi Imola, an Italian producer of industrial machinery, received from Unicredit a Sustainability-linked financing facility of 10 million euros with a tenure of 8 years and for which SACE provided a warranty (See here a previous post by BeBeez). The company will invest such proceeds in R&D for sustainable investments of its units for Tiles, Sanitaryware & Tableware and Rigid Packaging. The interest rate of the facility will vary upon the achievement of an increased use of energy from renewable sources. Sacmi has sales of above 1.1 billion (85% abroad) and equity of 682 million.

LMM Logistics issued a 5-years minibond of 1.5 million euros that Unicredit subscribed and for which Fondo Centrale provided a warranty (See here a previous post by BeBeez). LMM will invest the proceeds in its organic growth. LMM has sales of 14 million and an ebitda of 0.789 million. Sign up here for BeBeez Newsletter about Private Debt and receive all the last 24 hours updates for the sector.