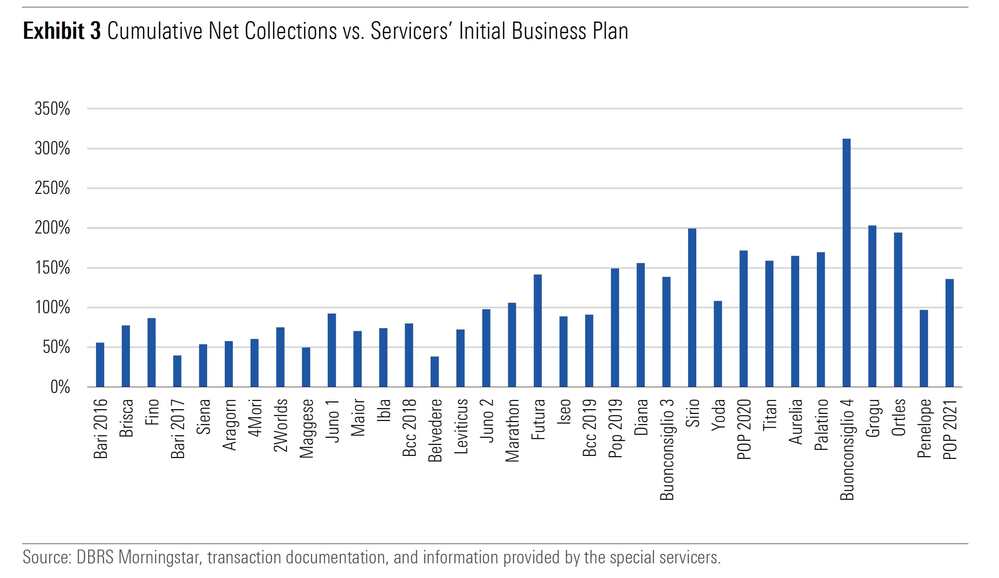 The trend towards improvement in the exposure to non-performing loans of Italian banks continues, thanks to the continuous sales to specialized investors. But the performance of securitized portfolios, at least those placed on the market and with a public rating, in particular those with a public guarantee (GACS), still leave something to be desired in many cases. In line with what has already emerged in recent months from the reports of various rating agencies, in particular we recall the one by Moody’s of last April (see here a previous article by BeBeez). The trend is now confirmed by the new edition of the European Nonperforming Loan Securitisations Performance by DBRS-Morningstar, updated to the latest interest payment dates (June and July 2022). As for servicers’ ability to recover the receivables under management, it is als interesting to have a look at FY 2021 financial statements for credit servicers active in Italy as reported in a study by PwC (see here BeBeez Insight View, available to subscribers to BeBeez News Premium and BeBeez Private Data).

In 1H22, investors sold NPEs worth 16 billion euros (91 transactions) on the primari market and 2.5 billion on the secondary market (125 transactions) said a report of Credit Village (see here a previous post by BeBeez). This trend is in line with BeBeez data for 1H22 (see here BeBeez Jan-May 2022 NPEs Report available to subscribers to BeBeez News Premium and BeBeez Private Data). BeBeez data say that in in the first 5 months of 2022 investors closed or announced deals on NPEs worth 14.6 billion. The value of the deals amounted to 27 billion in 2021 and to 42 billion in 2020 (see here BeBeez NPL Report 2021 and BeBeez NPL Report 2020).

BPER Banca and Cassa Depositi e Prestiti launched a 250 million euros Basket Bond programme for supporting Italian SMEs (see here a previous post by BeBeez). The first issuance is worth 48 millions, has a six-year maturity and the warranty of the European Investment Bank. Sources said to BeBeez that BPER and CDP will invest in the basket through the even acquisitions of notes maturing on 30 October 2031 that Mortirolo BB Spv issued. The notes pay a floating rate coupon of 3M Euribor plus a spred and a zero floor. The first six companies that are part of the programme are construction businesses ICM, CMB – Cooperativa Muratori, Braccianti di Carpi, Zanutta, Co.ge.fa; Cipriani Profilati SB, a producer of metal structures for the construction and agricoltural sectors; and Weightpack, a packaging company. The firms will invest the proceeds in their domestic and foreign development which includes acquisitions.

Cogefa, an Italian construction company that belongs to the Fantini family, received from Unicredit a 10-year green loan of 8 million euros for which the European Investment Bank provided a 75% warranty through the programme EIB Risk Sharing, part of the Paneuropean Warranty Fund (See here a previous post by BeBeez). The loan is part of Unicredit’s programme Finanziamento Futuro Sostenibile aimed at supporting the companies that aim to improve their sustainability. Cogefa has sales of above 137 million, an ebitda of 2.8 million and net cash of 2.9 million

Egea, an Italian multiutility received from illimity bank a credit facility of up to 100 million euros with a 36 months tenure (see here a previous post by BeBeez). The company will invest such proceeds in its working capital.

DeA Capital Alternative Funds sgr launched Flexible Capital Fund, a vehicle with a focus on special situations that will invest in equity and debt and target companies with revenues of up to 50 million euros (see here a previous post by BeBeez). The fund will receive the support of DeA Capital and Gruppo De Agostini, have initial resources of 100 million euros ahead of a target of 300 million. Vincenzo Manganelli and Federico Giribaldi will lead the fund.

SEF, an Italian renewable energy company that belongs to the Tortora family, received a project finance facility of 10.1 million euros from BCC Banca Iccrea, BCC Ravennate Forlivese Imolese and Riviera Banca (See here a previous post by BeBeez). SEF will invest the proceeds in the development of two photovoltaic plants with a power of 13 MW.

Arcmont Asset Management, an investor in private debt, received from Consob and Banca d’Italia the authorization to start its Italian operations and open its branch in Milan (see here a previous post by BeBeez). Armando Piccinno, a BNY Mellon alumnus, will head Arcmont’s Italian bureau and close partnerships with institutional investors and asset managers. Vanni Mario Zanchi will be the CIO of Arcmont.

CrescItalia, an independent fintech lender to SMEs, signed a partnership with Milan-listed BFF Bank (see here a previous post by BeBeez). CrescItalia will allow its clients to cash their invoices with the Italian Government.