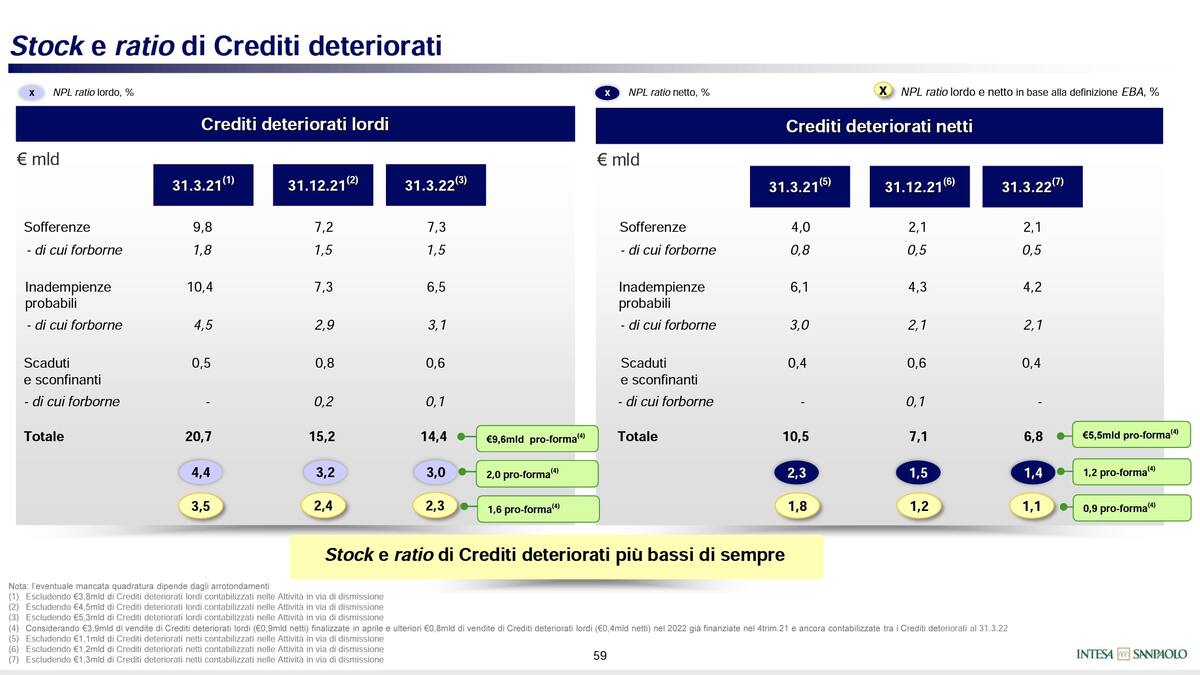 AMCO signed an agreement for purchasing from Intesa SanPaolo a 1.4 billion euros worth portfolio of non-performing leasing credits and a 120 million portfolio of single name UTPs (see here a previous post by BeBeez). The closing could take place by the end of 2022. AMCO retained Legance and White & Case as legal advisors.

Unicredit signed an agreement for the securitization of a portfolio of NPLs worth 1.3 billion euros with Milan-listed illimity (see here a previous post by BeBeez). The portfolio consists of non-performing mortgage and unsecured credits (48% backed by real estate assets).

Prelios will be the long-term preferred partner of UniCredit for the management of the bank’s UTPs (see here a previous post by BeBeez). The bank will ask Prelios to handle the flows of new UTPs for the next six years. Unicredit did not disclose the portfolio’s value that asked Prelios to manage. However, press reports said it could be worth one billion euros.

A report of Cherry Brick, a subsidiary of Cherry, the fintech startup that Giovanni Bossi co-founded, said that investors have acquired 69k Italian real estate assets through foreclosure auctions from January to April 2022 (see here a previous post by BeBeez). A report of Reviva, an Italian startup for real estate investment services that Ivano De Natale and Giulio Licenza founded, said that in 1H22, in Italy there have been 108.137 court-ordered real estate auctions (+16.1% from 1H21).

Costa Edutainment received 40 million euros resources from IDeA Corporate Credit Recovery, a DIP (debtor-in-possession) financing fund of DeA Capital Alternative Funds, which purchased a 10% stake through the subscription of a 5 million capital increase and of a convertible bond of 35 million in which the vehicle invested with illimity Bank and Azimut Eltif Private Debt – Capital Solutions, a fund that Muzinich & Co. manages (see here a previous post by BeBeez). In June 2019, Oaktree Capital Management acquired 42% of Costa, whose remaing 58% belongs to the eponymous family.

SunBerserker, part of renewable energy company Undo, received a project financing facility of 33 million euros from MPS Capital Services Banca per le Imprese (MPSCS) and UniCredit (see here a previous post by BeBeez). The company will invest the proceeds in refinancing a portfolio of 39 photovoltaic plants and in further acquisitions. Undo has sales of above 20 million and is part of the programme Elite di Borsa Italiana.

Cartiere Modesto Cardella, an Italian paper producer, received from Intesa Sanpaolo a loan of 2.4 million euros with the green warranty of SACE for 80% of the amount (see here a previous post by BeBeez). The company will invest such proceeds in building a 6 million worth plant for the production of bio-methane from industrial waste water. Cardella has sales of 43.3 million, an ebitda of 3 million and a net financial debt of 8 million.

Alessi Domenico, an Italian jewellery producer, is mulling for the issuance of a long-term minibond of up to 8 million euros maturing in 2025 and with a 90% warranty from SACE Garanzia Italia (see here a previous post by BeBeez).The company will place the bond on the crowdfunding portal Fundera and will invest the raised proceeds in purchasing commodities. Alessi Domenico has sales of 99 million with an ebitda of 1.6 million

Quercetti & C, an Italian toys maker, received from Unicredit a green loan of 0.5 million euros with the warranty of Fondo Centrale di Garanzia – MCC (see here a previous post by BeBeez). The facility is part of the programme Finanziamento Futuro Sostenibile through which Unicredit supports the companies that aim to make their business more ESG compliant. Quercetti will invest such proceeds in developing the production of eco-friendly toys and in reducing its CO2 emissions. Quercetti has sales of 6.9 million, an ebitda of 0.1 million and a net financial debt of 3.5 million.

Nextsense, an Italian health tech company, received 2.1 million euros in equity and debt (see here a previous post by BeBeez). Ulixes Capital Partners provided 0.6 million equity through the subscription of a capital increase, while Nextsense raised a direct lending facility of 1.5 million through Azimut Direct (part of Milan-listed Azimut). The company will invest the raised proceeds in its organic development.

Calabria RE, the owner of the shopping mall Porto degli Ulivi, received from Solution Bank (fka Credito di Romagna), a subsidiary of SC Lowy, a loan of undisclosed amount (see here a previous post by BeBeez). The company will invest the proceeds in refinancing its current debt and in developing the shopping centre. Calabria RE has sales of 3 million euros, an ebitda of 1.7 million and a net debt of 1.3 million.