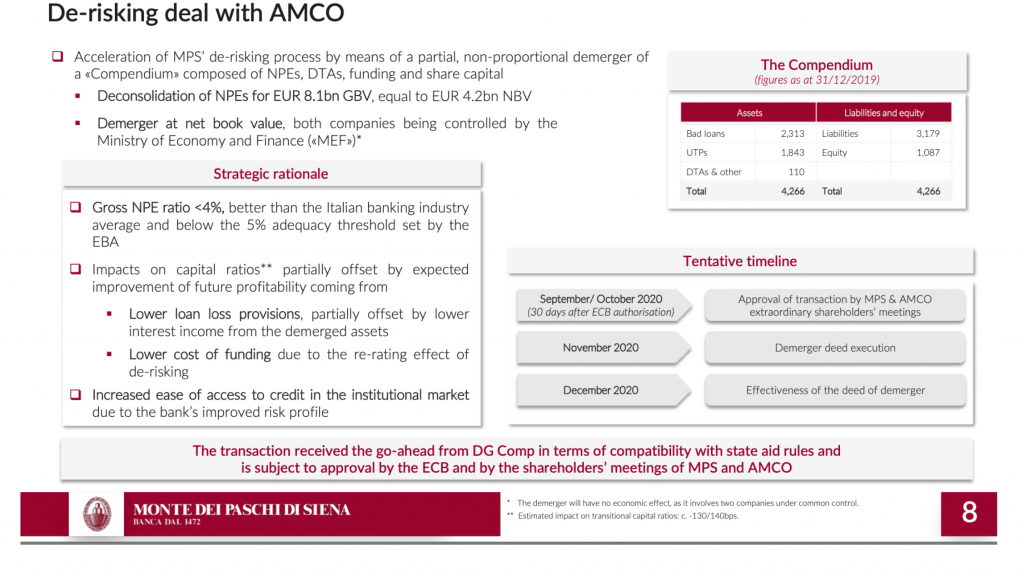 Yesterday the European Central Bank sent to Montepaschi its final decision about the bank’s non-proportional and partial spinoff and sale to AMCO of a large portfolio of distressed credits, tax assets (DTA), assets, financial and non-financial liabilities, and equity (see here a previous post by BeBeez). The final decision confirms the “draft decision” which the ECB had sent to the bank at the end of August and gives the green light to the operation with a series of conditions, including a recapitalization of the bank (see here a previous post by BeBeez). Earlier in May, the ECB said that the proposed transaction was in line with market conditions.
On 31 August, Monday, troubled Italian ham and charcuterie producer Ferrarini filed with Reggio Emilia Court a new receivership application that involves Amco and industry player Gruppo Pini (see here a previous post by BeBeez). On 11 August, Tuesday, Intesa Sanpaolo, Unicredit,  Gruppo Bonterre – Grandi Salumifici Italiani, O.P.A.S., and HP tabled a competing bid. In February 2019, Pini acquired the majority of Ferrarini and made a 10 million euros bid for the company’s recapitalization and acquiring 80% of the business.
Banca del Piemonte and Banca di Asti comitted to invest 30 million euros in additional notes of the securitization named #OpenBankingAlliance relative to loans issued to Italian SMEs on the fintech lending platform Credimi. The securitization program was originally launched with the support of Banco Desio  (see here a previous post by BeBeez). Earlier in June, Banco Desio actually signed a partnership with Credimi for investing 50 million in notes issued by Lumen spv srl, relative to SMEs financing facilities. The underlying loans have a tenure of five years and the warranty of Fondo di Garanzia.
Earlier in August, Fashion Box, the owner of fashion brands Replay, Replay & Sons and We Are Replay, received a 40 million euros financing facility from the programme Garanzia Italia of Sace, Unicredit, Intesa SanPaolo, Banco Bpm, andBanca Mps (see here a previous post by BeBeez). Fashion Box has sales of 262 million with an ebitda of 28 million. The company will invest such proceeds in its organic development, ceo Matteo Sinigaglia said.