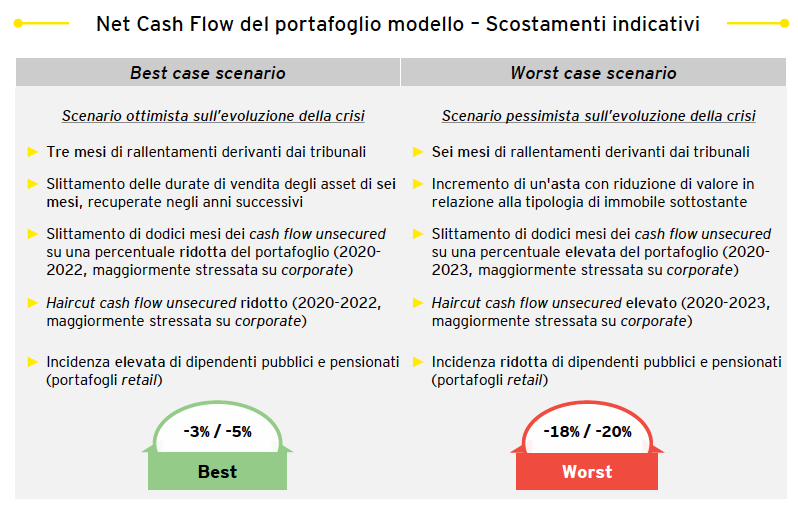 The net cash flow of NPL portfolios may shrink by 3-5% or 18-20% (worst case scenario) in consequence of the coronavirus emergency, says a report of EY (see here a previous post by BeBeez). The macroeconomic indicators will play a major role for each scenario.The sectors of tourism, retail and transports are the most troubles. However, Npl investors and servicers are reviewing the figures and terms of 30% of their portfolios.

Banco Bpm is exploring options for a portfolio of UTPs with a gross value of 2 billion euros (see here a previous post by BeBeez). The bank is mulling to sign a partnership with a servicer and carry on the securitization of a part of such portfolio. This portfolio makes in the region of one-third of the bank’s Utp portfolio. In 1Q19, the distressed credits of Banco Bpm amounted to 9.875 billion (net 5.43 billion), of which 3.517 billion of NPLs, UTPs for 6.252 billion and 106 million of expired credits. The gross NPE ratio is of 8.8% (net 5%), down from 9.1% of 4Q19 (net 5.2%), ahead of a target of a gross NPE of 5.9% (net 3%).

Prelios Innovation, a fintech company of Gruppo Prelios, sold a portfolio of NPLs worth more than 30 million euros through BlinkS, the digital platform for trading distressed credits that is part of Gruppo Prelios (See here a previous post by BeBeez). The majority of the credits is secured and has the GACS warranty. Gabriella Breno, the ceo of Prelios Innovation, said that the number of BlinkS’ users keeps growing.

On 3 April, Friday, Alberta Pacific Furniture (Apf), an Italian producer of couches, applied for receivership (see here a previous post by BeBeez). On 14 April, Tuesday, Treviso Court appointed Roberto Cortellazzo Wiel as extraordinary commissioner for the company, accepted the application and set 22 September 2020 as a deadline for drafting a receivership plan or accepting the debt restructuring plan. Alberta’s controlling shareholder is Giuseppe Sbroggiò. The company has sales of 11.34 million euros, an ebitda of 0.626 million, 5.4 million of banking debt and 2.7 million with suppliers.

Bari’s Court issued a bankruptcy sentence for Edisud, the publisher of La Gazzetta del Mezzogiorno (see here a previous post by BeBeez). Catania’s Court appointed the current auditing and directors board. Earlier in February, Edisud gave up on the receivership procedure. The paper posted an operative loss of 7 million in 2018.

Catania’s Court required a bankruptcy procedure for Catania Calcio, the local football team (see here a previous post by BeBeez). On 25 May, Monday, a hearing will appoint a new board of directors, while Catania Calcio will have to file it appeal by 22 May, Friday. Maurizio Pellegrino and Fabio Pagliara are working on tabling an offer with other bidders. The football club has debt of 15 million euros. Antonino Pulvirenti is the team’s controlling shareholder and owns Finaria, a financial holding that groups his interests in the tourism sector and the supermarket chain Fortè. In September 2017, Finaria signed a debt restructuring agreement and issued a 30 million bond in private placement that a subsidiary of Oaktree Capital Management subscribed.

On 18 May, Monday, Milan’s Court accepted the receivership application of Italian publisher Ugo Mursia Editore (See here a previous post by BeBeez). In 1955 Ugo Mursia and Giancarla Re founded the company that their daughter Fiorenza is currently heading. Mursia sold in 1998 its school books unit to Arnoldo Mondadori. The company has sales of 1.1 million euros, an ebitda of 25,000 euros, and net losses of 1.6 million.

Investors subscribed on third of the shares – worth 45.8 million euros – that troubled engineering group Trevi Finanziaria Industriale (Trevifin) launched on 4 April 2020 (See here a previous post by BeBeez). During the tender period (4 – 18 May, Monday) Trevi’s institutional shareholders FSI Investimenti (part of Cdp Equity) and Polaris Capital Management, acquired 35.8 million of shares. The shareholders committed to acquire up to 77.5 million shares and to invest in the unsubscribed portion of the capital increase that is worth 84.2 million and that are available on Milan stock market between 21 and 28 May, Thursday. Unsubscribed rights issues cost 1 euro cents for each share.

Zenith Service carried on a securitization of commercial credits of Italian SMEs on the fintech platform CrescItalia Lab Platform, part of Crescitalia Holding and issued notes amounting to up to 26 million euros (see here a previous post by BeBeez). In September 2019, Zenith made another securitization of 25 million of commercial invoices of Italian SMEs. Mattia Donadeo Spada, a managing partner of Crescitalia Holding, said that the firm s working on further projects.

Latteria Soresina received a 30 million euros financing facility from Gruppo Bancario Cooperativo Iccrea (20 million) and Cdp (10 million) (see here a previous post by BeBeez). The Italian co-operative dairy company will invest these proceeds in its organic development. Soresina has sales of 411 million and in 2019 launched a capital increase of 38.6 million.

On 15 May, Monday, Italian car dealer Tomasi Auto issued a Milan-listed short term minibond of 100k euros with a 4.5% coupon (see here a previous post by BeBeez). The issuance is part of a programme of short-term revolving minibond for 2020-2021 of up to 3 million and up to 0.5 million for each bond. The company will invest the raised proceeds in its working capital. Tomasi Auto previously raised through fintech lending platform October a 500k euros loan with a 4.5% rate and a 24 months tenure (November 2018) and another 500k euros loan  with the same term with a 4.35% rate (February 2020). Tomasi Auto has sales of 111.5 million, an ebitda of 4.06 million and net profit of 2.39 million.

Domori, the premium chocolate brand of Gruppo Illy, is working on the issuance of two minibonds of one million each (See here a previous post by BeBeez). The company aims to list on Milan market in 2021, ceo Andrea Macchione said. The first issuance will take place in fall 2020 and mature at the end of 2021. In 2021, Domori will issue the other one million bond due to mature in 5 years. In March 2019, Domori acquired UK competitor Prestat. The company has sales of 19.5 million (+7% yoy) that should be of 30 million at the end of 2020, the ebitda amounts to 0.66 million. Sign up here for BeBeez Newsletter about Private Debt and receive all the last 24 hours updates for the sector.

The Targetti family puts villa La Sfacciata up for sale. While studying the sale of logistics assets owned by its real estate company Tre Holding