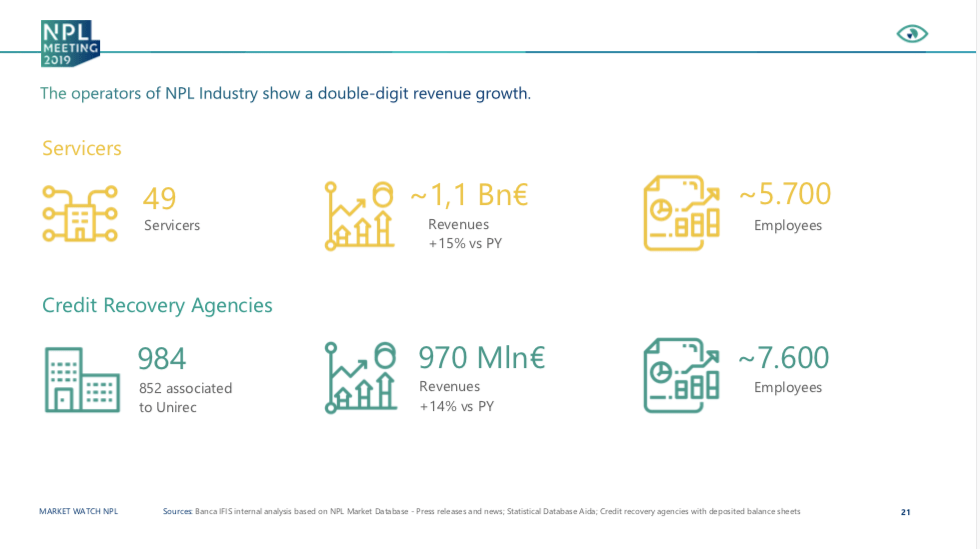 Distressed credits on book of both the Italian banks and investors that had been buying distressed credits in Italy in the last 4 years amout to 330 billion euros, said Luciano Colombini, the ceo of Banca Ifis, speaking at its annual NPL Meeting in Venice last Friday Sep. 27 (see here a previous post by BeBeez). Even though Italian banks’ distressed credits went down by 51% since 2015 (minus 173 billion), Italy has the highest European Npe ratio as well as a relevant rate of Utps that become Npls. Biagio Giacalone, Head of active credit portfolio steering of Intesa Sanpaolo, said that the bank over-achieved its targets for the amount of distressed credits and will get a 5% NPL ratio in 2021 through the sale of portfolio or industrial partnerships (see here a previous post by BeBeez)., Jose Brena, Head of non-core asset management at Unicredit, confirmed that the non core division of the bank expect to have on its accounts distressed credits for 10 billions by the end of the year. Unicredit is also said to be in talks with doValue (former doBank) lfor the securitization of a residential real estate portfolio worth 5 billion euros for which the bnk will ask for the Italian Government guarantee (GACS). Natalia Joubrina, Head of NPLs for Southern Europe at AnaCap Financial Partners said to BeBeez that her firm is interested in Italian NPLs of SMEs, single name Utps, and real estate distressed credits. Subscribers of BeBeez News Premium can read the  Npl Report  for 1H19 find out here how to subscribe to BeBeez News Premium for just 20 euros per month and read the BeBeez Reports and Insight Views.

AMCO (fka SGA), the Italian Government investment veichle focused on managing distressed credits, issued a 600 million euros Luxembourg-listed senior unsecured bond (see here a previous post by BeBeez). The issuance is due to mature in 5 years, ie January 2025, pays a fixed rate coupon of 1.375% and placed at a price of 99.374. This issuance is for institutional investors and is part of the Euro Medium Term Note Programme of AMCO and has an expected rating of BBB (Standard & Poor’s) and of BBB- (Fitch).

Clessidra sgr raised 320 million euros for its new Clessidra Restructuring Fund , a fund aimed at investing in corporate Utps (see here a previous post by BeBeez). Federico Ghizzoni, the executive vice-president of Clessidra and formerly ceo of Unicredit, will manage the fund together with Giovanni Bossi, formerly ceo of Banca Ifis, and Massimiliano Fossati, Silvio Longari, and Luca Marson.

European fintech lending platform October raised 30 million euros for a direct lending fund focused on Italian SMEs (see here a previous post by BeBeez). Andrea Bianchi, coo of ConfidiSystema!, previously said to BeBeez that his company was planning invest in a direct lending fund together with other Confidi which October was raising. IGI, Intergaranzia Italia, five Confidi that are part of Federconfidi and of Rete Fidi Italia and the European Investment Fund collaborated with October, while investors in the fund were Confidi Systema!, Neafidi, Fidimpresa Italia, Confidi Sardegna, and Confidi Centro.

Cdp issued a loan of 393 million Yuan Renmimbi (50 million euros) to Deutz Fahr Machinery, a Chinese subsidiary of Italy’s agricolture automotive company SDF (SAME-Deutz Fahr) (see here a previous post by BeBeez). The company borrowed the money for supporting its organic development and Cdp was able to lend in yuan thanks to its previous bond issue in Chinese money so-called Panda bond. SDF, whose ceo is Lodovico Bussolati, belongs to the Carozza Family and has sales 1.37 billion euros, an ebitda of 123 million, and net profits of 42 million.

Italian car dealer Brandini spa issued a 1.5 million euros Milan-listed bond due to mature on March 2021 with an amortizing structure (See here a previous post by BeBeez). The bond pays a 3.95% coupon and Banca Sella wholly subscribed it. Brandini has sales of 357.8 million, an ebida of 8.85 million, and a net financial debt of 31.7 million. The company will invest the proceeds of the issuance in its organic growth and m&a.

Ferretti yacht maker is to debut at Piazza Affari next Oct 16. No dividends will be paid in the medium term