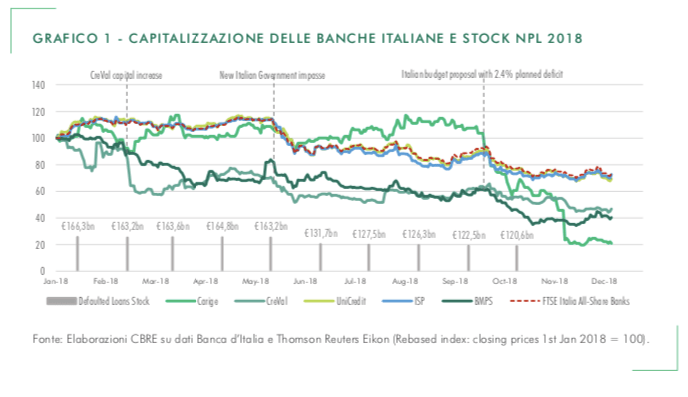 Real Estate Market Outlook 2019 of CBRE says that in 2018 distressed credit deals have been of a face value 100 billion of euros, this figure is in line with market analysis that BeBeez released in January and highlighted the closure of 72 deals worth above 101 billion (see here a previous post by BeBeez). According to Credit Village’s Osservatorio Nazionale NPL Market, which included in its report about the same matter also small transactions, market participants closed 398 deals worth 106.4 billion. Almost one third of these transactions involved the secondary market that, however, has still a limited size of 6.2 billion. Market participants said to BeBeez that distressed credit portfolios amounting to 21 billion are about to go on the block as in 2Q18 companies of the FTSE Italian Banks lost 25% of their market cap since the beginning of the year. Furthermore, massive sales of Npls (above 20% of the stock) and deleveraging incentives will receive fiscal advantages and absorb less equity of the vendor firm.

Listed Italian bank BPER sold to listed peer Gruppo Unipol a portfolio of distressed credits (68% unsecured and 32% secured originated both by BPER Bank and its other controlled bank Banco di Sardegna) with a face value of 1.3 billion of euros for 130 million (see here a previous post by BeBeez). Unipol carried on the acquisition through UnipolReC, its distressed credits arm.

Banco Bpm closed a 7.4 billion of euros worth securitisation of NPLs as it agreed in December with financial investors Credito Fondiario and Elliot,  that will buy 95% of junior shares (see here a previous post by BeBeez). Credito Fondiario will buy 70% of Banco Bpm’s servicing platform for distressed credits and will handle Elliot’s portfolio, the residual stock of NPLs of Banco Bpm, and 80% of the flows of distressed credits for the next ten years.

SGA (Società di Gestione Attività) completed the issuance of its Luxembourg listed bond of 250 million of euros that is part of an EMTN issuances programme of one billion (see here a previous post by BeBeez). The bond has a five years tenure and pays a 2.625% coupon. Fitch assigned a BBB- rating to the bond.

Fire, an Italian credit servicer, acquired a portfolio of secured distressed credits from Cassa di Risparmio di Savigliano (see here a previous post by BeBeez). Fire has revenues of 46 million of euros and Sergio Bommarito is its chairman.

As for the private debt market, Brandini, an Italian car dealer, listed on Milan ExtraMot Pro a short-term minibond (see here a previous post by BeBeez). This liability is worth 300k euros, pays a 4% coupon, and is due to mature on August 2019. This transaction is part of a programme of issuances amounting to 5 million and up to one million for each liability with an up to 12 months. Brandini hired Frigiolini & Partners Merchant as advisor. Brandini has sales of 275.6 million, an ebitda of 7.5 million, and net debt of 28 million.

Friulia entirely subscribed a minibond worth up to 1.5 million of euros with a tenure of 6 years that Thermokey, an Italian producer of air conditioning systems, issued (see here a previous post by BeBeez). Investo Uno, Thermokey’s 70% shareholder, will subscribe a capital increase that the company will launch. Giorgio Visentini founded the business in 1991 together with Giuseppe Patriarca, the firm’s chairman. In 2018, Thermokey posted sales of 29 million (+10% yoy) and will invest the proceeds of the minibond in developing further its core business.

Sources said to BeBeez that Carco, an Italian producer of industrial components, issued a 50 million of US Dollars’ worth bond that Pricoa Capital entirely subscribed for acquiring California based peer Microflex Technologies  (see here a previous post by BeBeez). Pricoa is part of US insurer Prudential.

As for distressed debt companies, Iconic Turin-based chocolate producer Peyrano bankrupted after it has been in receivership (see here a previous post by BeBeez). The Peyrano Family sold a 51% stake of the business to Naples-based Gruppo Maione in 2002 and carried on a full exit in 2006. However in 2010 the company delared bankruptcy a first time and the Peyrano family bought back the business. Peyrano has debt of 5 million of euros.

The price of the 300 million of euros Luxembourg-listed bond of Italian shipping company Moby , which belongs to the Onorato Family  dropped just over 35% of it nominal value (see here a previous post by BeBeez). The liability pays a 7.75% coupon and is due to mature on February 2023. The bad performance of the bond is due to a drop in the group’s ebitda. In 3Q18, Moby’s ebitda went down to 68.3 million (114.6 million yoy). Between December 2018 and early January 2019 rating agencies S&P’s and Moody’s downgraded the bond to CCC- from CCC+ with negative outlook, and Caa2 from Caa1 with negative outlook. Turnaround firms with a focus on shipping like Pillarstone Italy, York Capital, Taconic Capital, and Och-Ziff Capital Managementare looking at Moby. In 2015, OZCM provided the Onorato Family with 100 million for buying back the stake that private equity firm Clessidra owned in Moby.

Troubled Italian shipping company RBD Armatori attracted an unexpected offer of 270 million of euros from an unnamed foreign financial firm (see here a previous post by BeBeez). A press report of Trasporto Europa speculated that the bid may come from French hedge fund Boussard&Gavaudan or private equity Reuben Brothers, which has an Italian subsidiary with a focus on shipping investments. The article said that RBD ceo Giuseppe Mauro Rizzo could join the bidders for the buy out of the asset.

Troubled Italian contractor Astaldi received a bridge loan of 75 million of euros from financial firm Fortress Investment  (see here a previous post by BeBeez). The loan has been structured as a super-senior secured bond due to mature on 12 February 2022 paying a coupon of 11.25% for the first year and of which 6.5% can stick to the pay if you can or PIYC mechanism. The coupon will be of 14.25% until the maturity (9.5% could have the form of PIYC). The bond is listed on the Third Market of the Wiener Boerse.