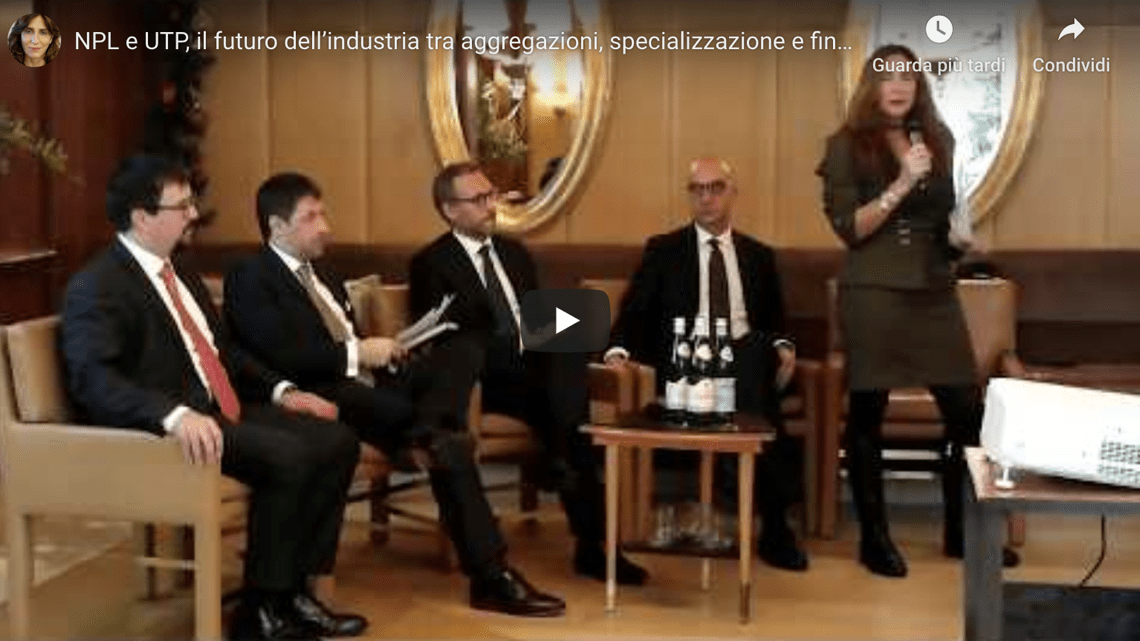 Intesa Sanpaolo and Prelios subscribed the closing for Utp agreement that announced at the end of July (see here a previous post by BeBeez). The Utp portfolio amounts to 10 billion euros. Prelios and Intesa Sanpaolo signed a ten-years contract for the servicing of corparate and SMEs Utps of Intesa Sanpaolo by Prelios. The initial portfolio is worth 6.7 billion, the sale and the securitization of a portfolio of UTPs amounting to 3 billion.

Cassa Depositi e Prestiti acquired from DEPOBank and MPS a 25% of Fondo Italiano d’Investimento sgr of which now holds a 68%  stake (see here a previous post by BeBeez). At the end of October, BeBeez said that CDP was holding talks with the banks. Intesa San Paolo and Unicredit each own 12.5% of FII, while ABI and Confindustria have 3.5% each. Antonio Pace (the founder and manager of hedge fund Morgan Stanley Investcorp Geo-risk Macro Fund) will replace Carlo Mammola as ceo of FII while Andrea Montanino wil replace Innocenzo Cipolletta as chairman. Further boardmembers are  Vito Lo Piccolo, Esedra Chiacchella, Simonetta Acri, Gianluca Lo Presti, Anna Chiara Sala, and Cristina Pozzi. FII has asset under management amounting to 2.3 billions.

Cdp invested 40 million euros in Anthilia BIT III (AB3), the third private debt fund that Anthilia Capital Partners launched  (see here a previous post by BeBeez). The European Investment Fund (EIF) reportedly poured 40 million in the fund that now has resources of 245 million. The managers of Anthilia BIT III poured 5 millions and set a final fundraising target of 350 million by 2020 with a gross yield of 6-7%. The fund will subscribe bonds of issuers with sales of 20 – 200 million, an above 5% ebitda and a net financial debt to ebitda ratio below 4X. Furthermore, AB3 set investment limitations of 10% of its resources for every single issue, 20% for single sector and up to 20% of its money in notes of securitizations of commercial invoices coming from fintech platforms and 10% for each vendor.

On 6th December, Friday, Milan-listed Portale Sardegna issued the first one million euros tranche of its 4 million minibond programme (See here a previous post by BeBeez). The Milan-listed bond has a 5 years term and pays a 5% coupon. Massimiliano Cossu, the ceo and founder of Portale Sardegna, said that the company will invest the proceeds in its organic development and M&A.

Rome-based construction company Ricci issued a Milan-listed bond of 0.35 milion euros as part of its issuance programme of up to 3 million (see here a previous post by BeBeez). The bond pays a 5% coupon and is due to mature on December 2022. In August 2018, Ricci issued a 1.181 million bond listed on Milan due to mature in September 2022 with a 5% coupon and a B.2.1 rating from Cerved. The company will invest these proceeds in its organic development. Mario and Tullio Ricci founded the company in 1986 and equally own it. Ricci has sales of 33.8 million, an ebitda of 1.6 million and a net financial debt of 10.8 million.

A1 Entertainment will issue in 2020 a 2 million euros minibond in four tranches (see here a previous post by BeBeez). The first tranche for January 2020 amounts to 0.5 million 2020, the second will take place in 2020. A1 Entertainment was born in 2009 and is a distributor of musical contents. The company recently acquired 33% of 432, a company that assists several Italian artists. A1 Entertainment has sales of 9.4 million.

Milan-listed Investment holding First Capital closed the placement of its Milan-listed convertible bond of 25 million (See here a previous post by BeBeez). The issuance price amounts to 98% of the bond face value and pays an annual 3.75% coupon (almost 0.9 million). The conversion price is of 20 euros per share with a premium of 5% of the nominal value. Strategy Invest (28.14% owner of First Capital) and Next Holding (28.99%) subscribed 3 million of this bond  together with Giuseppe La Pietra, Walter Bonardi, Vincenzo Polidoro (ceo), Renzo Torchiani, Sandro Torchiani, and Marco Maria Fumagalli. The company also accepted  to allow the subscribers of the previous bonds that First Capital issued to invest in the current convertible bond through a mark-down of its nominal value. Once the negotiation of the current POC will begin, the old 2020 bond will have a nominal value of 1.7 million. In 1H19, First Capital posted net profits of 13.73 million and a NAV of 47.1 millioni or 18,95 euros per share.

Officine CST, a servicer of which Cerberus Capital Management owns a controlling stake, issued a Milan-listed minibond of 4 million euros with a 2.35% coupon and due to mature on 31 December 2021 (see here a previous post by BeBeez). The company will invest such proceeds in the acquisition of distressed credits worth 4 million. Officine CST has a turnover of 17.7 million, an ebitda of 5 million, and a net financial debt of 2.3 million. In July 2018 Cerberus acquired 57.11% of Officine CST. CST ceo Gianpiero Oddone has a 28% stake while Roberto Nicastro, senior advisor of Cerberus is the company’s non-executive chairman. P Partners Investments, a London-based company that belongs to Riccardo Banchetti, owns 11.37% of CST. Find out here how to subscribe to BeBeez News Premium for just 20 euros per month and read the latest BeBeez Private Debt and Private Lending Report and BeBeez Reports and Insight Views.

Iccrea carried on the securitization of a portfolio of performing corporate credits worth 519.43 million euros that the BCC network and Banca Mediocredito del Friuli Venezia Giulia issued (see here a previous post by BeBeez). Credico Finance 18, the spv that calculation agent and back-up servicer Zenith Service created, acquired the credits. Credico issued 290 million of Dublin-listed senior shares with rating Aa3 from Moody’s, AAA from DBRS and AAA from Scope Ratings. The spv issued unlisted and unrated Junior shares amounting to 229.43 million. The spv placed on the market A1 Senior shares worth 90 million, while the European Investment Bank acquired the A2 shares amounting to 200 million.