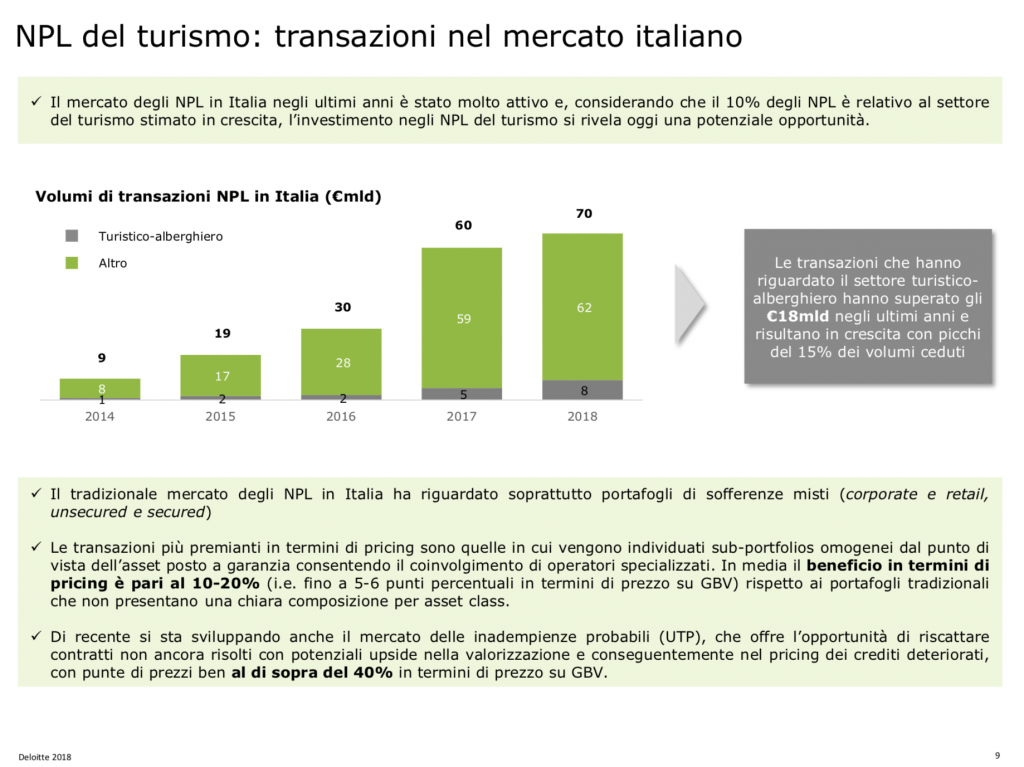 Italian banks have on their books 15 billion of euros of NPLs linked to hotel, resorts real estate assets for tourism (see here a previous post by BeBeez). Umberto Rorai and Lorenzo Zini, part of the financial advisory unit of Deloitte highlighted these figures on the side-lines of a conference that the firm arranged together with GMA, a servicer. Deloitte produced such report with Rescasa, the Italian association of resorts. Emanuele Grassi, ceo of GMA, said that investing in this kind of NPLs requires a knowledge of the tourism sector.

Banca Interprovinciale, which will soon rebrand as Illimity, acquired from Cassa di Risparmio di Volterra a portfolio of gross NPLs worth 155 million of euros (See here a previous post by BeBeez). Corrado Passera, ceo of the bank, and Andrea Clamer, head of Illimity’s NPL division said that the firm aims to acquire single-name corporate, secured and unsecured portfolio of NPLs.

Ifis Npl finalised the acquisition of three unsecured NPLs worth 1.26 billion of euros (see here a previous post byBeBeez). UniCredit sold the portfolio Torino, which was of interest also to Cerberus and has a nominal value of 1.09 billion. Deutsche Bank sold a portfolio worth 155 million. An Italian consumer credit company sold a portfolio worth 21 million.

Banca Intermobiliare securitised a portfolio of gross problematic credits worth 601.1 million of euros consistently with its 2019-2021 business plan that the 70.63% shareholder Attestor Capital previously highlighted  (see here a previous post by BeBeez and here a further previous post by BeBeez). BIM aims to become a capital light bank and focus on private banking activities and the supply of credit only to clients with Lombard credit score.  BIM sold this portfolio for 147.7 million or 24.6% of the credits nominal value. After such sale, BIM may launch a capital increase of up to 91 million and then have an equity worth 154 million.

Polish listed firm Kruk acquired from Findomestic a portfolio of NPLs worth 300 million of euros (see here a previous post by BeBeez). Kruk is currently handling 400,000 positions in Italy.

As for the private debt market, instead, Incus Capital, a Spanish private capital firm, raised 500 million for its European Credit Fund III and announced the opening of an office in Milan (see here a previous post by BeBeez). Managing director Corrado Giovanelli will head the Italian subsidiary. Incus Capital has assets for 1 billion of euros.

Italmatch Chemicals, the Italian chemical company that Bain Capital acquired earlier in June, placed a senior secured  floating rate bond worth 410 million of euros to finance the company’s buyout  (see here a previous post by BeBeez). S&P’s granted a preliminary B rating to this issuance. Bain acquired Italmatch on the ground of an enterprise value of in the region of 800 million or 11X the company’s 70 million ebitda. This liability has a 6 years tenure, grants a call option after the first year and is currently paying a spread of 500 basis points over the Euribor rate.

Selle Royal, an Italian producer of seats for bicycles, listed on  ExtraMot Pro a 10 million euros minibond due to mature on 31 December 2024 and paying a 4.95% coupon with an amortizing reimbursement structure starting from 31 December 2020 (see here a previous post by BeBeez). Mediobanca Fondo per le Imprese 2.0 subscribed the issuance. Selle Royal listed on ExtraMot Pro a 10 million minibond in 2014. This liability will mature in June 2019 and pay a 5.75% coupon. Duemme subscribed the bond. Selle generates sales of 113.4 million with an ebitda of 11.1 million and net financial debt of 36.2 million. The company will invest the proceeds of such issuance in its organic and external growth.

Gruppo Scai placed a five years secured minibond of 2.5 million of euros with an amortizing repayment structure and a 5.5% coupon (see here a previous post by BeBeez). Scai is an Ict consulting firm that belongs to its chairman Pier Giorgio Bedogni and ceo Massimiliano Cipolletta. The company has revenues of 61 million, an ebitda in the region of 3 million and losses of 0.65 million. This issuance is the first tranche of a 7 million programm aimed at financing Scai’s growth through acquisitions of competitors generating sales of less than 10 million.

Tema, the Italian producer of components for the construction industry, issued a minibond worth 5 million of euros that Volksbank subscribed (see here a previous post by BeBeez).  This liability has a seven years maturity and pays a 3% coupon. Luciano Mazzer, is the chairman of the company that exports 80.3% of its 42 million sales.